The sisters of Saudi women’s rights activist Loujain al-Hathloul say the election of U.S. President Joe Biden and his administration’s renewed focus on human rights were crucial to their sister’s release from prison Wednesday.

But Lila and Alia al-Hathloul say her conditional discharge – Loujain cannot leave Saudi Arabia and is barred from using social media – does not represent real change in their country. Instead, they see it merely as a sign that the Saudi royal family is anxious to please Mr. Biden’s administration.

“Of course, Saudi Arabia’s situation is tightly connected to what’s going on in the U.S. I mean, it is a fact that Loujain was imprisoned during the previous administration and it was really hard to get anything. And it is a fact that she was released a few days, a few weeks after Biden’s arrival,” said Alia, the oldest of the three sisters. “Without international pressure, we cannot obtain something in Saudi Arabia.”

Her sisters were speaking to journalists Thursday in an online news conference from Belgium, where they now live.

Thirty-one-year-old Loujain – who began her advocacy while studying at the University of British Columbia – was first detained in 2018 in the United Arab Emirates and flown back to Saudi Arabia against her will. She spent 1,001 days in prison for her activism, which included filming herself breaking Saudi Arabia’s law banning women from driving, as well as social-media posts calling for accelerated political reforms in the country.

They described Loujain as being in good health and good spirits, despite an ordeal that included two hunger strikes and physical torture – which the family has said included flogging, electrical shocks, waterboarding and sexual assault.

In a photo posted shortly after her release, Loujain was smiling widely but looked thinner, with a new streak of grey hair. Her sisters said the first thing she did after her release was buy her first ice cream in three years.

They said her spirit – and her desire to keep fighting for change – remains unbroken. “I’m so happy to see her [looking] very strong. As I knew her. But I never thought she was going to remain as strong as before. This is the Loujain that I know,” Alia said.

Loujain did not join the news conference and would not be posting to her Twitter account in the near future, her sisters said, as that would likely constitute a violation of the terms of her release.

“Loujain is not free. She’s just been temporarily released – conditionally released. What we want now is real justice and that Loujain is completely, unconditionally free,” said Lila, the youngest.

She said Loujain was committed to making sure that those who had tortured her – including Saud al-Qahtani, a close aide to the country’s de facto ruler, Crown Prince Mohammed bin Salman – would be punished for their actions. “She will continue to seek justice and to continue to try to prove in any way that torture happened and also that the torturers must be sentenced.”

Loujain’s release from prison has been hailed as “welcome news” by Mr. Biden, who has vowed to re-examine the U.S.-Saudi relationship and recently halted U.S. support for the Saudi-led war in Yemen.

Foreign Affairs Minister Marc Garneau posted on his Twitter account Wednesday that the Canadian government was “very relieved by this outcome.”

But the al-Hathloul sisters cautioned against seeing Loujain’s release as a sign that either Saudi Arabia or the crown prince had suddenly changed.

“I would say Loujain’s release is only good for us, for her, and it doesn’t change anything [about] Saudi Arabia’s institutional problem,” said Lila, who described an “atmosphere of fear” in Saudi Arabia since Crown Prince Mohammed had come to power in 2017. “Because Loujain is released, it doesn’t mean women’s rights in Saudi Arabia improved.” 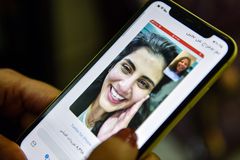