Nesreen Rasho had applied to attend college in northern Iraq when Islamic State (ISIS) militants kidnapped her and sold her into slavery in their 2014 assault on her Yazidi homeland.

Ms. Rasho was freed by ransom after seven months in captivity but she has yet to rebuild her life – one of about 200,000 Yazidis too afraid, six years on, to return to towns ruined by the ISIS assault, described by the United Nations as a genocide.

“For six years, we’ve been asking for help but no one is coming to help us. Unfortunately there are only empty promises and false hopes,” said 25-year-old Ms. Rasho, who lives in the Mam Rashan camp in northern Iraq.

“As Yazidi survivors, we feel we’re alone, everyone has forgotten us. We have the right to live like everybody else,” she told the Thomson Reuters Foundation via an interpreter.

The estimated 400,000-strong Yazidi community in Iraq is a Kurdish minority whose faith combines elements of Christianity, Zoroastrianism and Islam.

ISIS, which considers them devil-worshippers, killed and abducted thousands of Yazidis in its attack on their Mount Sinjar heartland. It held sway over huge areas of Iraq and Syria until 2017 when it was driven out by U.S.-led coalition forces.

On the sixth anniversary of the Sinjar massacre, human rights advocates called on the international community to help survivors, rescue missing Yazidis and bring them justice.

About half the Yazidi community remain displaced in camps, while some 120,000 people have returned home to Sinjar, many living without water, health care or electricity, said Nobel laureate Nadia Murad at an event marking the anniversary.

Almost 3,000 Yazidi women and children are still missing, added Ms. Murad, herself a survivor of sexual slavery by ISIS.

“Yazidis deserve peace and security, they deserve justice and accountability,” she said. “Survivors cannot wait another six years for the world to act.”

Trauma is widespread among survivors like Ms. Rasho living in camps in northern Iraq, which remains unstable.

After weeks of being moved from town to town inside Iraq, Ms. Rasho was taken to Syria where she was forced to renounce her faith and adopt Islam.

She was sold as a sex slave twice to ISIS men who abused her and was punished when she attempted to escape. She contemplated suicide.

Another displaced Yazidi woman, who declined to publish her name, described how she witnessed a relative being executed by ISIS militants in Sinjar in 2014.

“Some of my family members are still missing. Today we’re still living in fear and worry. We need safety and protection,” said the 31-year-old, who lives in a camp near Iraq’s border with Turkey.

Ronia, a teenage survivor living in a camp in northern Iraq, has blocked out many of the details of the five years she spent in slavery, after being captured as a child with her mother and siblings.

Ronia, who declined to publish her full name, estimated that she was sold more than 10 times.

She recalled her mother being beaten in front of her and said that the day they were separated to be sold individually, was the “most painful moment” in her life.

“I had no idea where my mother was, was she dead?” said Ronia, 16, who was freed last year when her final owner allowed her to leave during a ceasefire.

She later found out that her parents have sought asylum in Canada and she plans to apply to join them.

“We shouldn’t have to keep asking for action,” said Saib Khidir, the Yazidi representative in parliament.

“There is neglect from the international community and on the local level also toward survivors who are living in dire conditions.”

Lawyer Amal Clooney, who represents the Yazidis, said at a United Nations event commemorating the massacre that she had asked the Security Council last year to bring ISIS to justice but no action had been taken.

Among the options that the wife of actor George Clooney suggested were to authorize the International Criminal Court to put ISIS fighters on trial or to create a court with a treaty between the UN and Iraq.

“I said that if we don’t act now, it may be too late, because ISIS fighters held in makeshift prisons in Syria were at risk of escape,” she said.

“The escapes that we feared took place; with hundreds of prisoners reportedly walking free from ISIS camps last October.”

Iraq has been conducting trials of thousands of suspected Islamic State members, while some European nations, including Germany and France, have initiated trials against ISIS fighters who returned home.

But Ms. Rasho still does not feel safe in Iraq and she has applied for resettlement in Australia.

“In my youth, I built big dreams and planned for a bright future,” she said. “But now my future is lost and I don’t know what will happen.”

Investigators building case in bid to prosecute Islamic State figures for crimes against Yazidis
May 21, 2020 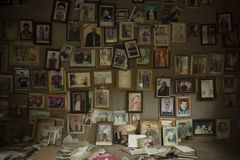