Only after a neighbour died of the coronavirus did Juan José and Esther Serralde begin to believe that the threat was real – but it was too late. Soon, the older couple, their son and daughter-in-law, and two of their grandchildren were infected.

Even if they had acted earlier, the family members might have struggled to protect themselves. Three generations share a home in a southern borough of Mexico City. The modest house opens onto a street market – and the family sells clothes right outside their door. Bedrooms double as storerooms. Every space was a potential play area for four kids.

The family’s story helps explain why five months into Mexico’s COVID-19 epidemic, poor neighbourhoods like San Gregorio Atlapulco persist as hot spots while other parts of the capital see a modest improvement.

In San Gregorio and many places like it, fear of hospitals, deep-rooted distrust of authorities, difficulties accessing medical care, and the pressure to make a living amid economic uncertainty are fuelling the spread of the virus.

“A lot of what is happening is because of how families are handling it,” said the Serraldes’ son, José Juan, 47, who says his parents were skeptics and took few precautions, though he and his wife were more careful. Many people “don’t accept what is happening and don’t want to accept that they are dying of COVID.”

In the span of a month, José Juan Serralde buried his parents and an aunt, and fell ill himself and recovered, as did his wife and their daughters.

“The family crypt filled up in less than a month,” he said.

Mexico has confirmed more than 443,000 infections and over 48,000 deaths – putting it in third place for fatalities worldwide.

Due to a lack of widespread testing, many deaths in Mexico remain uncounted. But a recently released report gives a sense of the scale of the outbreak: From April 19 to June 30, the capital city saw over 17,800 more deaths than usual.

Mexico recommended that people self-quarantine starting in mid-March. Mr. Serralde complied, and as a non-essential employee of the Xochimilco borough where he lives, stopped going to work. But his parents continued visiting markets to sell the plants they grew in a greenhouse, and they did not wear masks. The family continued to live in tight quarters.

Such living conditions are common in San Gregorio, an impoverished neighbourhood of some 30,000 residents where it’s common to see farmers in rubber boots pushing carts of produce from nearby fields. Large, multi-generational households and the fact that many people work in the informal economy mean it’s hard for many residents to self-quarantine.

“You couldn’t isolate at home, we all shared the place,” Mr. Serralde said. “It was a mistake on our part, but no one explained it to us until after what happened to my dad.”

Mexican health officials have been holding daily televised news conferences about the pandemic for months. Still, they have given mixed messages on the necessity of wearing a mask, and President Andrés Manuel López Obrador himself has worn one only occasionally.

Mr. Serralde wasn’t sure how to implement health officials’ recommendations until a friend who is a doctor explained after his father died that the family should use disposable plates and plasticware, clean the bathroom with bleach after each person used it, and get everyone in the house, except his youngest daughter, tested.

By June, Mexico City Mayor Claudia Sheinbaum had paired a cautious reopening with expanding testing and contact tracing. In July, she added an information campaign that sent government workers door to door in the most affected areas. The city of about 10 million – with another 10 million living in the surroundings – is now testing about 4,000 people a day.

But these efforts came too late for the Serralde family. At the beginning of May, they learned their neighbour had died of the virus. Soon after, Mr. Serralde’s 73-year-old father developed diarrhea and his 69-year-old mother complained of pain around her kidneys. Neither’s symptoms made the family suspect COVID-19.

By the time they buried the older man, half the family had symptoms. Mr. Serralde’s mother began to struggle to breathe.

But she was afraid to go to the hospital because of the common belief that those who go in never come out, her son explained.

Dr. Jorge Esteban Ballesteros, director of the San Gregorio Health Center, said such neighbourhoods are often hotbeds of distrust and misinformation, creating the perfect conditions for the epidemic to grow.

“It’s a difficult population of deeply rooted customs, resistant toward authority, who say the virus is something made up by the government,” Dr. Ballesteros said. “They’ve even said we’re spreading the virus as we sanitize.”

Mr. Serralde still breaks down thinking about trying to navigate the health system while also suffering from the illness.

When the family finally convinced the older woman to go to the hospital, they struggled to find one that would take her. A military hospital turned them away, and they ended up in a hard-hit neighbouring borough.

Once she was hospitalized, the family had to secure an oxygen mask because the hospital did not have one – and they even had to hunt down their own acetaminophen.

Dr. Ballesteros says authorities need to reinforce the measures they have taken, like providing more economic support to struggling families, expanding testing and continuing to knock on doors to give information in hard-hit neighbourhoods.

Mr. Serralde acknowledges that his family didn’t take enough precautions and now tries to persuade everyone to take such measures – his wife is even selling masks – but he also believes authorities need to be more strict. For instance, he wishes they would enforce the virus-control measures that businesses are supposed to implement and make face masks mandatory.

“I feel like this is slipping out of the hands of the government, the mayor, the president, everyone,” he said. 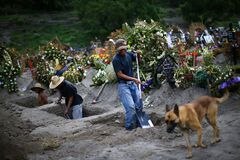 Mexico City outlaws gay conversion therapy
Subscriber content
July 24, 2020
Report an error
Due to technical reasons, we have temporarily removed commenting from our articles. We hope to have this fixed soon. Thank you for your patience. If you are looking to give feedback on our new site, please send it along to feedback@globeandmail.com. If you want to write a letter to the editor, please forward to letters@globeandmail.com.
Comments