Five days of violence and looting have killed at least 45 people in South Africa, including many who were trampled in ransacking stampedes at shopping malls as the destruction continued on Tuesday.

South Africa is facing the danger of food and medicine shortages within weeks as the country suffers a devastating wave of attacks by looters and rioters, President Cyril Ramaphosa has warned.

Mr. Ramaphosa has deployed 2,500 soldiers in support of beleaguered police who have failed to quell an escalating surge of destruction and looting, ignited at first by the imprisonment of former president Jacob Zuma.

The destruction is being described as the worst in South Africa in many years. Thousands of rioters in huge mobs have triggered chaos in much of the country, shutting down national highways and train routes, torching entire shopping malls, laying siege to business districts, looting shops and sparking violence that led to the deaths of at least six people and the arrest of nearly 500 people so far.

“These disruptions will cost lives by cutting off the supply chains that sustain our food, health and production systems,” Mr. Ramaphosa said in a nationally televised speech on Monday night.

“We will soon be facing a huge risk of food insecurity and medicine insecurity in a few weeks.”

Mr. Ramaphosa pledged that the country’s National Security Council, which he chairs, will meet twice daily to co-ordinate “all measures necessary” to restore stability.

But even as he spoke, on split screens, television channels were showing the massive looting that continued with impunity in the city of Durban, where hundreds of people lugged piles of stolen goods out of a shopping mall with no police in sight.

The chaos across South Africa is linked partly to factional fighting within the ruling African National Congress, but it has also been fuelled by mounting unemployment, a deteriorating economy and stark inequality in the country.

Videos on social media showed some of the looters shouting Mr. Zuma’s name as they walked away from shops with carts heaped with stolen goods.

One of the former president’s daughters, Dudu Zuma-Sambudla, appeared to endorse the rioting, tweeting a series of videos of arson attacks with the hashtag #FreeJacobZuma. Some South African commentators have called for her arrest for inciting violence.

Police have clashed with the rioters, firing rubber bullets and tear gas, but were often overwhelmed by the mobs and sometimes merely stood by and watched. The looting took place on a vast scale – even coffins and blood-bank supplies were stolen. Some of the targeted attacks were deliberately co-ordinated in WhatsApp groups, according to local reports.

Many pharmacies, clinics and vaccination centres were looted or shut down by the attacks, damaging the country’s efforts to accelerate its COVID-19 vaccination program. Ambulances and oxygen supplies have been blocked in some regions, and many hospital workers were unable to reach their workplaces. Health experts warned that the rioting may be a superspreader event, likely to heighten the surge of COVID-19 cases and deaths in South Africa.

Armed soldiers appeared on Monday on the streets of Pietermaritzburg, the provincial capital of KwaZulu-Natal, epicentre of the protests and looting. The unrest has also escalated in Gauteng, South Africa’s most populous province and economic heartland.

Daily vaccinations in KwaZulu-Natal dropped from nearly 38,000 on Friday to less than 4,000 on Monday because of the disruptions. In Gauteng, an armoured ambulance was deployed to protect paramedics and patients from attacks.

In a statement on Monday, army officials said the military deployment would “assist law enforcement agencies deployed in Gauteng and KwaZulu-Natal … to quell the unrest that has gripped both provinces in the last few days.”

Analysts said the attacks are also, to some extent, a response to the country’s deteriorating economic situation. South Africa has seen rising unemployment and deepening inequality for years, but the economic problems have grown worse as a result of pandemic lockdowns, including the latest restrictions announced as a result of a third wave of COVID-19 that began last month.

The riots have gone beyond the initial uproar by Mr. Zuma’s supporters, quickly spreading to familiar targets, including foreign-owned shops that have often suffered the brunt of looting attacks and arson in earlier protests against the government.

The rioting began last week in KwaZulu-Natal, the stronghold of Mr. Zuma, a Zulu traditionalist. By Monday, some parts of the province were described as a war zone, with armed security guards confronting looters.

Mr. Ramaphosa, in an earlier speech on Sunday night, had warned of the dangers of “ethnic mobilization” – a reference to the former president’s Zulu supporters.

He acknowledged that some South Africans “may be hurt and angry” after Mr. Zuma’s jailing. But there cannot be any justification for “violent, destructive and disruptive actions,” he said.

“Some of these acts of violence are based on ethnic mobilization. … We are a nation committed to non-racialism and non-tribalism.”

In a statement, the South African Chamber of Commerce and Industry said the violence and looting is “pure criminality by marauding gangs who are masquerading as protesters. Business has been the main target of this violent criminality, and this has to stop, as our economy is struggling.”

One of Mr. Zuma’s most vocal supporters, veteran ANC activist Carl Niehaus, said the riots are a “vindication” of the Zuma faction’s earlier warnings about the consequences of his imprisonment. “We know there is a huge support base for Zuma which was going to be very angry because of this, and that is exactly what is happening,” Mr. Niehaus told South African newspaper The Sunday Times.

But another commentator, former opposition politician Lindiwe Mazibuko, said the looting is “much bigger than Jacob Zuma,” despite his faction’s claims.

“Our country is stalked by poverty, hunger, unemployment and desperation in this pandemic,” she tweeted on Monday. “People believe they have nothing to lose by joining the madness.” 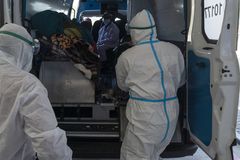 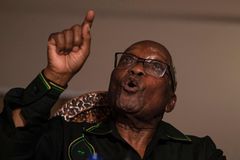