With hospitals overwhelmed and oxygen shortages mounting, the South African government is imposing an alcohol ban and a nightly curfew in an attempt to defend its health system from a relentless rise in COVID-19 cases.

The virus has spread so swiftly in South Africa in recent weeks that the country now has the fifth-largest number of active cases in the world. It is also generating the fourth-largest number of new daily cases, behind only the United States, Brazil and India.

“The storm is upon us,” President Cyril Ramaphosa said in a speech to the nation on Sunday night. “Our nation is confronted by the gravest crisis in the history of our democracy.”

There are “deeply worrying” reports of people being turned away from hospitals and clinics because of a lack of beds or essential supplies, he said.

As of Sunday night, South Africa had recorded a total of 276,242 coronavirus cases, along with 4,079 deaths. Many hospitals have been severely affected by cases among their doctors and nurses. More than 4,800 health workers had tested positive for the virus by the end of June, often forcing wards to shut down, the government disclosed last week.

After beginning in China and then sweeping through Europe and North America in its early months, the pandemic has recently begun to inflict much of its heaviest damage in Latin America, Africa and South Asia. Of the 20 countries with the most new daily cases on Sunday, the vast majority were outside Europe or North America.

A growing number of South African politicians and celebrities have been infected with the virus, including three of the nine provincial premiers, several top officials of the ruling African National Congress, and a prominent member of a traditional royal family.

South African hospitals are increasingly using high-flow nasal oxygen, rather than ventilators, to save lives among the most critically ill patients. But a number of hospitals and clinics have reported oxygen shortages, and suppliers can’t keep up with the demand.

“Every company has run out, and it’s coming in dribs and drabs,” said Nathi Mdladla, a critical-care physician at a hospital in Pretoria, in an online briefing on Sunday night.

Few countries have banned alcohol during the coronavirus pandemic, but South Africa imposed a temporary ban on alcohol sales in late March and found that it saved thousands of hospital beds by reducing trauma admissions from violent crime and car accidents.

Hospitals recorded 23,000 fewer weekly admissions to their trauma units in the early weeks of the national lockdown, and researchers estimated that 40 per cent of this reduction was due to the alcohol ban. While some people criticized the ban for fuelling illicit sales and costing jobs, opinion polls found that the ban was supported by more than 60 per cent of South Africans.

After the alcohol ban was lifted in early June, many hospitals reported a drastic surge in alcohol-related trauma cases, often competing for badly needed hospital beds with COVID-19 patients.

“As we head towards the peak of infections, it is vital that we do not burden our clinics and hospitals with alcohol-related injuries that could have been avoided,” Mr. Ramaphosa said in his speech to the nation on Sunday.

Charles Parry, director of the alcohol, tobacco and other drug research unit at the South African Medical Research Council, estimated that an eight-week alcohol ban could free up space in hospitals for 18,000 coronavirus patients.

The nightly curfew, from 9 p.m. to 4 a.m., is also aimed at reducing trauma admissions to hospitals, since the majority of road accidents happen at night.

Mr. Ramaphosa complained that some South Africans are “organizing parties” and having “drinking sprees” during the pandemic. He announced that the government will impose stricter enforcement of regulations on mask-wearing. Owners of shops, offices, public buildings and public-transport vehicles will be legally required to ensure that anyone who enters must wear a face mask.

But in a major concession to heavy pressure from the powerful mini-bus taxi industry, which transports millions of workers every day, Mr. Ramaphosa agreed to allow local taxis to operate at 100-per-cent capacity, as long as they enforce mask regulations and keep windows open for better ventilation.

Jeremy Nel, head of infectious diseases at Helen Joseph Hospital, a major hospital in Johannesburg, said there needs to be a dramatic increase in hospital beds in Gauteng province, where Johannesburg and Pretoria are located.

Hospitals are already “groaning and creaking at the seams,” even though the peak of demand is not expected until mid-August, he told the online briefing on Sunday. “Clearly beds are going to be a massive issue,” he said. 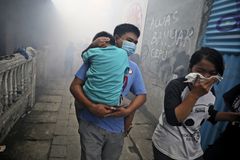