The Islamic State group claimed responsibility Tuesday for the coordinated suicide bombings on churches and hotels in Sri Lanka, as the president of the traumatized nation promised to dismiss senior officials who had failed to act on warnings about the attacks.

As Sri Lankans buried the dead from the half-dozen Easter Sunday bombings that killed more than 300 people, the Islamic State issued a statement boasting of the suicide assaults. It also distributed an online video showing the person Sri Lankan officials suspect of having led the attacks.

In the video, the man believed to be the chief suspect, Mohammed Zaharan, a little-known extremist preacher from Sri Lanka, leads a group of black-clad masked disciples pledging fealty to the Islamic State.

There is no direct evidence that the extremist group did more than provide encouragement for the suicide bombings, part of its decree calling for attacks on others considered infidels by Islamic State ideologues.

But if there were more substantial connections, they would reinforce worries by Western security officials and others that the group remains a potent threat, despite the destruction of its self-proclaimed Middle East caliphate earlier this year. In a sign of the concern, the FBI, Interpol and other foreign intelligence services joined the investigation.

It remains unclear how Zaharan, leader of a local group known for little more than defacing Buddhist statues, could have organized and executed such a devastating, sophisticated attack. But Indian officials said Tuesday that they had been watching him since last year as a suspected online recruiter for the Islamic State group.

Some Sri Lankan officials speculated that the attacks had been retaliation for the mosque massacres in New Zealand last month. But there was no corroborating evidence to support this.

For Sri Lanka, the island nation still recovering from a wrenching civil war that ended a decade ago, the trauma, anger and recriminations from the suicide bombings only worsened as it became clear that some top officials had known of the threat.

A spate of anti-Muslim violence was reported as the death toll from the attacks rose to at least 321. Authorities said more than 40 suspects had been seized, all Sri Lankans. And the prime minister said that Zaharan, whose whereabouts were unknown Monday, may have been one of the suicide bombers.

In his first national address since the attacks, President Maithripala Sirisena sought to allay criticism that he was at least partly responsible for the security failure. He announced major changes were coming.

“I must be truthful and admit that there were lapses on the part of defense officials,” the president said.

He acknowledged “there was an intelligence report about the attack,” which his subordinates had known about for many days, but he also claimed that he was “not kept informed.”

Sirisena did not specify who would be replaced. But his senior adviser, Shiral Lakthilaka, said that “positions of secretary of the Ministry of Defense and inspector general of police are positions earmarked for dismissal.”

Many Sri Lankans say the president contributed to the failure by having refused to let the prime minister, Ranil Wickremesinghe, a political rival, into security meetings.

The Sri Lankan government has been bitterly divided and dysfunctional for months. Wickremesinghe has complained that he wasn’t given any information about the impending attacks.

He said at a news conference that there “seems to have been foreign involvement” and that investigators believed some of the assailants “have traveled abroad and have come back.” He stopped short of saying they had fought for the Islamic State group.

Wickremesinghe also said that “Zaharan is suspected to be one of the bombers,” but that forensic identification had not been verified.

Zaharan, who went by several names, including Mohammed Cassim Mohamed Zaharan, Zaharan Hashmi and Zahran Hashim, was considered little more than an unsuccessful cleric who preached kill-all-the-infidels messages as he drifted from mosque to mosque in Sri Lanka and India.

Before the Easter Sunday assault, one of the deadliest terrorist attacks in recent years, the most destructive act by Zaharan’s small band of followers was chipping the faces of three Buddha statues.

“He never came across to me as intelligent, and he never had many people around him,” said Hilmy Ahmed, vice president of the Muslim Council of Sri Lanka, who had been tracking him for years.

Aside from the video’s claim of responsibility, the Islamic State group provided no evidence it had played any role. But Indian officials disclosed Tuesday that they had begun investigating Zaharan in 2018 after discovering an Islamic State cell in southern India.

According to Indian officials, Zaharan, believed to be in his late 30s or early 40s, was a strident YouTube recruiter for the group. In one video he appears in front of an image of the burning World Trade Center towers from the Sept. 11, 2001, attacks, urging Muslims to kill nonbelievers.

As the first mass burials unfolded in Sri Lanka on Tuesday, with bulldozers making space for the hundreds of new graves, grief hardened into anger.

Many Sri Lankans are furious at their government for not stopping the attacks. The leader of the Catholic community, Cardinal Malcolm Ranjith, archbishop of Colombo, the capital, said he would have told worshippers not to go to Easter Mass, had he known of the impending danger.

“Couldn’t we have prevented the situation?” Ranjith asked. “Why wasn’t there any action?”

Religious tensions appeared to be spreading. Grieving Christians spoke of revenge, and several mosques were pelted with stones. In different parts of the island, Muslim-owned shops were vandalized, and hundreds of Muslim families, fearing for their safety, began to flee religiously mixed areas.

Many counterterrorism experts said they still found it hard to believe that Zaharan’s group carried out a half-dozen coordinated bombings with such deadly precision.

Most experts say an international terrorist group helped. It was likely that the explosives used in the attacks had been secreted into Sri Lanka through smuggler boats widely known to bring heroin, illegal weapons and other contraband to the island, said security officials who work in Sri Lanka.

Colombo remained under a nighttime curfew and on edge. Police officials told citizens to be wary of any suspicious-looking trucks that might be carrying bombs.

While Zaharan may have struggled in the real world, he appeared to have found his voice online. According to Ahmed, vice president of Sri Lanka’s Muslim Council, Zaharan’s preaching was too radical for the mosques of Kattankudy, his hometown in eastern Sri Lanka.

“The people of his village turned against him and told him to leave,” Ahmed said. “So he turned to YouTube.”

Not much is known about his upbringing. He did his early years of schooling in Kattankudy and traveled to India for a seven-year-course on Islamic theology, Ahmed said, but dropped out after three years.

He then began a long sojourn of traveling between India and Sri Lanka, preaching at any mosque that would accept him, teaching the Quran to younger students and uploading more than a dozen fiery videos, including many that argued Muslims had a right to kill non-Muslims.

After deadly religious riots broke out between Buddhists and Muslims in Sri Lanka in 2014, Ahmed said he began paying closer attention to Zaharan. Ahmed’s moderate Muslim group was trying to calm tensions between the warring communities, and in a meeting with government intelligence agents in early 2015, Ahmed said, he suggested that intelligence agents monitor Zaharan.

Zaharan disappeared for a few years, Ahmed said, but last December he re-emerged in the town of Mawanella, in central Sri Lanka. Some young men, who police said were Muslim, defaced three Buddhist statues, and after arresting them, police officers determined the young men had been attending religious classes run by Zaharan.

That investigation led officers to a remote coconut plantation on the northwestern coast where Sri Lankan officials discovered a large weapons cache, including 100 kilograms, or more than 45 pounds, of explosives and detonators.

Around the same time, Indian intelligence agents began following Zaharan. They said Tuesday that they had cracked an Islamic State cell in southern India. A member of that cell said he had been influenced by Zaharan’s videos in which the preacher encouraged believers to join the Islamic State group. The Indian investigations picked up pace.

Zaharan’s small group, which he called the National Thowfeek Jamaath, was clearly getting more ambitious, and the Indians were increasingly concerned. By early April, they provided the Sri Lankans with the names, addresses and phone numbers of Zaharan’s followers. The Indians said they had information Zaharan was plotting to blow up churches and attack the Indian Embassy in Sri Lanka. The Sri Lankans did not make any arrests or increase security at the churches.

On Easter morning, just hours before the bombings, the Indians again communicated with the Sri Lankans that an attack was imminent, according to one Indian official. Again, the Sri Lankans did not do anything. 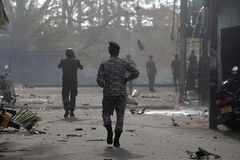 Sri Lanka attacks: A glimpse into the victims who lost their lives Subscriber content
April 22, 2019