Wes Bellamy, a former Charlottesville city councilman, said that when he first started raising the issue of removing Confederate monuments, black and white people alike across Virginia told him he was just causing trouble.

Several years – and death threats – later, Mr. Bellamy said Virginia Governor Ralph Northam’s announcement Thursday that an iconic tribute to the Confederacy would be taken down feels like divine intervention.

In the wake of global unrest over the death of George Floyd, a black man who died after a white police officer pressed a knee into his neck while he pleaded for air, Mr. Northam announced the statue of General Robert E. Lee near downtown Richmond will be removed from its 12-metre-tall granite pedestal as soon as possible. The Governor said it will go into storage while his administration seeks public input about its future.

Mr. Northam’s decision to remove the bronze equestrian statue, which sits on state property in the middle of Richmond’s renowned Monument Avenue, has been widely praised by black leaders and activists, and their allies, as a key marker – but not the finish line – on the path to equality.

For years, their calls to remove that monument and others in this former capital of the Confederacy have been resisted, and efforts to even tell a more complete picture of Richmond’s history – including the addition of a statue of black tennis hero Arthur Ashe on Monument Avenue in the 1990s – have been met with pushback.

“I always hoped this day would come but never fully believed it would,” said state Senator Jennifer McClellan, who lives near the statue and drives by it every day. She said when the statue is finally gone it will feel “like an incredible burden has been lifted off my shoulders and finally I can breathe and heal.”

Mr. Northam’s announcement came a day after Richmond Mayor Levar Stoney announced he will seek to remove the four other Confederate statues along Monument Avenue, which make up one of the most prominent collections of tributes to the Confederacy in the United States.

Together, the decisions mark a striking departure from recent years, when even after a violent rally of white supremacists descended on Charlottesville in 2017 and other Confederate monuments started falling across the U.S., Virginia did not make the same changes.

In part, local governments were hamstrung by a state law that protects memorials to war veterans. That law was amended earlier this year by the new Democratic majority at the statehouse and signed by Mr. Northam. When the changes go into effect July 1, localities will be able to decide the monuments’ fate.

As for the Lee statue, Mr. Northam and his predecessor, fellow Democrat Terry McAuliffe, had not previously pressed the issue.

Corey Stuckey, a 17-year-old activist who has helped lead protests at the Lee statue and was there earlier this week when peaceful protesters were tear gassed, said Thursday’s news means protests are working.

“It shows that change is actually coming,” Mr. Stuckey said on the foot of the Lee statue’s pedestal, where he helped lead a rally Thursday. “They went from tear gassing us to stopping, and now they’re actually doing what we’re asking.”

Mr. Northam said he recognized the “tremendous pain” that has been brought into focus by Mr. Floyd’s killing. “In order to heal that divisiveness, the statues need to come down,” said Mr. Northam, who pledged that Virginia will no longer “preach a false version of history.”

The Governor said the statue will be removed in the coming weeks and discussions will follow about what should be done with the massive pedestal. He raised the possibility that another statue could be put on top.

Ana Edwards, a member of the Virginia Defenders for Freedom, Justice & Equality who for more than a decade has been leading an effort to memorialize historic Shockoe Bottom, the centre of Richmond’s slave trade, through the establishment of a memorial park and educational campus, said in a statement Wednesday that history was being made.

“Today, our city’s leadership, long afraid of taking this step, has at long last discovered the courage of the people and made the decision to remove from our civic landscape these monuments to white supremacy,” said Ms. Edwards, a descendant of enslaved people who were sold out of Richmond.

B. Frank Earnest, a spokesman for the Virginia Division of the Sons of Confederate Veterans, also acknowledged – and lamented – that times have changed.

“America as we knew it is pretty much gone,” Mr. Earnest said Wednesday after he learned of the Governor’s plans. He said he wasn’t sure of the group’s next steps but said they would work to preserve the monuments, even if they are removed.

Those celebrating the Lee statue’s removal were planning next steps and emphasizing that removing Confederate monuments is a key symbolic victory, not the end goal.

Zyahna Bryant, a student activist and community organizer who wrote a 2016 petition calling on the Charlottesville’s city coun City Council to remove a statue of Lee from a downtown park, was among those who joined Northam on Thursday. She thanked the activists whose decades of works she said had led to “where we are today” but said there was far more work to be done.

“I want to be clear that there will be no healing or reconciliation until we have equity, until we have fully dismantled the systems that oppress black and brown people,” Ms. Bryant said. 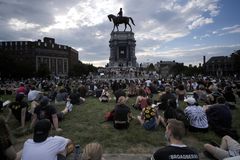 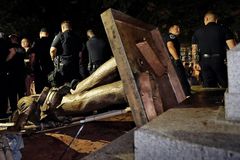