To Bristol Mayor Marvin Rees, it was an act of “historical poetry” when Black Lives Matter protesters yanked down a statue of colonial merchant Edward Colston last month, and threw it into the same harbour once used by his slave-trading ships.

Mr. Rees, who was born to a Jamaican father and a British mother, knows that his own ancestors may have been among the estimated 80,000 Africans that Colston shipped into slavery from that same harbour in the early 18th century. While Colston made a fortune from the trafficking, as many as a quarter of his human cargo died crossing the Atlantic. Their bodies were thrown into the water, as Colston’s iron likeness was centuries later.

But while the toppling of the statue was an important symbolic moment, Mr. Rees says the really hard work still lies ahead. Bristol, like the rest of Britain and the West, retains deep racial divides that are rooted in Colston’s era, a problem that didn’t disappear when the slave trader’s statue was yanked off its plinth.

Mr. Rees – the first directly elected Black mayor of a major European city – says that dealing with that legacy is much more urgent than deciding which statues need to be pulled down next, or which old television shows need to be taken off Netflix.

“You can’t just do symbols,” he told The Globe and Mail, speaking last week as he strode up a steep hill in a park near the city council building. “Symbolic acts are important, but the history of trying to tackle inequality and racism has been full of symbolic acts – hand-holding, singing together, praying together – that haven’t actually led to a world in which people born with Black and brown skin aren’t more likely to end up with poor educational outcomes, and [have led to] a criminal justice system that’s direly unequal.”

While the toppling of Colston ignited a global movement that has seen monuments of colonial rulers and Confederate generals fall in recent weeks in Europe and the United States – sparking a debate about whether the same should happen to some controversial statues in Canada – Mr. Rees prefers to talk about his own city’s problems.

Bristol is seen as one of Britain’s most progressive cities, a reputation reinforced by Mr. Rees’s 2016 election win. But the rising Labour Party star says that’s only part of the story. “There is a very woke, progressive culture, and that is true. But it’s also true that we’re one of the worst cities to be born Black in. We’ve got 25 per cent of the kids in the city in poverty, 20 per cent at risk of hunger every day.”

Racial profiling and disproportionate use of force by police are major problems in Britain, as they are in the U.S. and Canada, Mr. Rees said. But while there have been some high-profile deaths of Black people in police custody – most famously the 2008 death of Sean Rigg, who died of a heart attack after being pinned down by London police officers – Mr. Rees said such cases have been less frequent because “our police don’t carry guns, which is incredibly helpful.”

A graduate of Yale University’s prestigious World Fellows program, Mr. Rees sees addressing Bristol’s history as a slave-trading hub as the first step in what he hopes will be a broad-based push to eliminate the systemic barriers that keep many Black residents trapped in poverty and powerlessness.

“The conversation is about power. Racism is not about feelings and emotions – well, it is, but it isn’t. … I love personal reconciliation. I’m mixed-race. It’s my family, I love it. But I get really frustrated when people focus on the emotional connection without taking into account the economic connection, the political connection,” he said. “Building houses is not as glamorous as pulling a statue down. But it’s more important in many ways.”

But Colston – long portrayed as the city’s near-saintly founding father – hasn’t been erased from Bristol, a city that he helped build through money he bequeathed to charities upon his death in 1721.

The building opposite Mr. Rees’s office in City Hall still appears on maps as Colston Hall, though the signage has been taken down, and the concert facility is expected to be given a new name in the autumn. There are two Colston’s private schools in the city, which are in the midst of consultations about the name “which some students wish to keep and others wish to change.” The street where the empty plinth stands is still called Colston Avenue. There’s a pub called the Colston Arms, and bakers still sell the Colston bun, a local sweetbread flavoured with dried fruits that’s said to have been the slave trader’s own recipe.

The deification of Colston was so complete in Bristol that the 48-year-old Mr. Rees said he never questioned the statue until 2007, when the city held a series of events to mark the 200th anniversary of Britain’s Parliament banning the slave trade. “The statue, once you become aware of it and all the branding, [was] an affront. To me – not just as a Jamaican descended from Africans at some point – but to Bristolians, and what I think the city should stand for,” he said. “I don’t condone criminal damage, I can’t, but I don’t miss the statue.”

Almost as daunting as the challenge of shrinking Bristol’s racial divide is the task of creating a historical narrative that everyone in the city agrees on, or can at least accept. Mr. Rees says he wants those who are offended by the destruction of the statue to feel as included as those who were elated when it fell.

He said it’s a particularly delicate walk for a Black politician, who knows that some will interpret every move he makes as influenced by the colour of his skin. “That’s one of the reasons I didn’t make taking down Colston’s statue my top priority when I came in … if I come along, the first directly elected African-heritage mayor of a major European city, and I start taking down the symbols of racism – it’s all I’m going to be known for. I’m not going to be known for, you know, bringing in a balanced budget, political aspiration, regeneration, affordable housing, education. I’m not going to be known for all those things, even if I did them.”

Mr. Rees has ordered the statue fished out of the city’s harbour, and hopes to one day see it stand – with a fuller explanation of Colston’s complete story than appeared on the original plaque – in the local museum. All of it, he said, from the erection of the statue, to its fall, “is now part of the statue’s story, and part of Bristol’s story.” 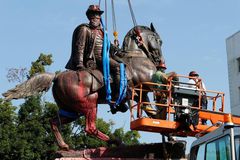 Frederick Douglass statue ripped from base in Rochester, N.Y.
July 6, 2020 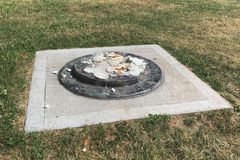 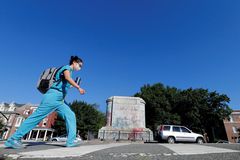