When Myanmar’s police forces surrounded the dormitory of a teacher training college in the northern city of Myitkyina last week, they arrested two teachers and beat one of them, breaking her hand.

The teachers, who were released the same day, were participating in a civil disobedience movement that has rapidly spread across the country, part of broader protests against a Feb. 1 military coup. Authorities have responded to the worker strikes with harassment, threats and force.

“I feel unsafe at night, and since this morning, I feel unsafe during the daytime too,” said a leader of the teachers’ strike, who witnessed her colleagues’ arrests. The Globe and Mail is not identifying her nor other striking workers because of the risks they face for their role in the movement.

More than 600 people, including more than two dozen striking workers, have been arrested since the military seized power, and fewer than 50 have been released, according to information collected by the Assistance Association for Political Prisoners, a Thailand- and Myanmar-based human-rights organization. Three people have been killed after state forces opened fire on non-violent protests in the cities of Naypyidaw and Mandalay; one of the victims, a volunteer medic who was shot in the head, was a minor.

Since the military arrested top government officials, including de facto leader Aung San Suu Kyi, and declared a year-long state of emergency, hundreds of thousands have demonstrated in protest. With Myanmar having only five years under an elected government, following more than a half-century in the grip of military rule, the public has made clear its desire for democracy. Striking government workers, now amounting to roughly three-fourths of all civil servants according to a report by the Associated Press, seek to paralyze the country to bring down the regime.

“To stop this mechanism, we must stop the people who are driving it,” said a locomotive driver in Mandalay. “We have to play our own role ... not turning wheels, not pulling gears, not steering or running motors. I believe that only by resisting from every part can we impact the government mechanism.”

The movement has already inflicted major damage not only on the transportation system, where nearly all workers have stopped; it has also closed hospitals and cracks are showing across administrative, banking, police and education sectors.

The locomotive driver interviewed by The Globe questioned whether the military has the capacity to keep the trains running on its own. “You can’t learn in a few steps like riding a bicycle. They are saying they can replace us, but I don’t think it will be easy.”

He said he had received messages from other drivers that the military had forced them at gunpoint to drive trains; this situation was also reported by the BBC. On Feb. 15, members of the public laid down on the tracks outside the Mandalay station to stop military-operated trains from passing. That evening, state forces fired live rounds into a housing compound for railway staff.

The locomotive driver said late last week that he and hundreds of railway workers were continuing to barricade themselves inside the compound. “We guard our compound by turn. We don’t let anyone in or out,” he said. “Everyone is afraid of being suddenly arrested.”

In less populated areas, striking workers said their smaller numbers left them feeling especially vulnerable. A civil administrator in eastern Kayah State, who is one of 12 from her office to join the movement, told The Globe that on Feb. 10, her superiors phoned her and demanded she report to work and sign a declaration explaining her reason for her absence.

“We believe we don’t need to return to our jobs or give explanations, so we didn’t go back on the appointment day,” she said. Now in hiding, she is primarily communicating by handwritten and oral messages. Fearing her call could be intercepted, she spoke to The Globe from a borrowed phone.

An administrative clerk in the jade mining town of Hpakant also went into hiding after receiving a written demand from authorities to justify his absence, although he and nine colleagues had already posted a statement about their participation in the campaign on a signboard at the town’s entrance.

Three of his colleagues bowed under pressure, while he and six others have continued striking. “If we go back to work, people will lose their trust and remember us as traitors or blacklist us. We don’t want such a history,” he said.

For those who grew up under the former junta, the current scenario evokes vivid flashbacks. “I hate the military junta to death,” said the locomotive driver in Mandalay. “We cannot accept it as a government because we have experienced difficult situations, suffering, and sorrow that it has caused.”

Now, despite the risks and difficulties, a sense of common purpose – strengthened by an outpouring of community support with accommodation, aid and protection – has propelled the movement forward.

“We have already started swimming and now we are in the middle of the sea,” said the locomotive driver. “If we don’t swim, we will drown ... we must swim forward.” 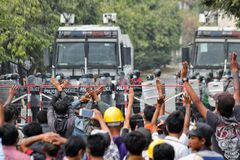 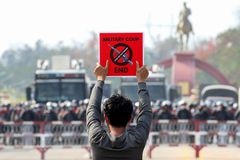 Myanmar’s joyful young protesters press for democracy – but history is not on their side
Subscriber content
February 17, 2021 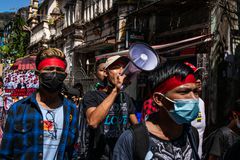 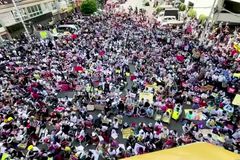