Support among some Latino voters and a strong turnout from his loyal base of supporters have put Donald Trump into a position to fight to save his presidency.

As vote counts continued to trickle in from several battleground states, exit polls across the southern United States indicated both weaknesses and enduring strengths in Mr. Trump’s nationalist brand of politics after four years in office.

A concerted effort to appeal to Hispanic voters - particularly Cuban-Americans - appeared to pay dividends for the Republican incumbent in Florida. Meanwhile, the exit polls show Trump supporters came out in strong numbers in small cities and rural areas of the South and the West, helping to narrow the race in some key states.

But they also showed Mr. Trump experienced a revolt among college-educated suburban voters - particularly women - in states such as Georgia, North Carolina and Arizona, three former Republican strongholds. On Wednesday, Mr. Trump was leading in only the first two, by razor-thin margins.

With votes still left to count on Wednesday in those three states and Nevada, preliminary results showed tight races across the Sun Belt, the temperate southern region of the country stretching from Florida to California that was once pivotal to the party’s presidential victories.

Mr. Trump won Florida by a healthy margin thanks in part to increased support among Latino voters in the state. He won Cuban-American communities in South Florida by more than 100,000 votes, shaving Democrat Joe Biden’s lead in Miami-Dade County to 52 per cent, down 10 points from Hillary Clinton’s 2016 performance in the county.

Exit polls showed Mr. Trump also won about half the votes cast in Florida by those who identify as having Central American heritage. And he saw a jump in support in Osceola County, a heavily Puerto Rican region of Central Florida.

While Republicans have long held an advantage among Cuban-Americans, Mr. Trump courted Latino voters throughout the campaign, particularly those whose families fled oppressive regimes in Cuba and Venezuela. The Republican nominee appealed to them with messages that Democrats were radical leftists bent on turning the United States into a socialist country.

His administration also reversed many of the Obama-era efforts to normalize relations with Cuba. Such moves have played well among many Cuban-Americans in the state, according to an October survey by Florida International University that predicted Mr. Trump would win the state’s Cuban vote by 58 per cent. (Exit polls suggest 59 per cent of Cuban voters in Florida supported Mr. Trump.)

The results cascaded through other races in the Miami area, where Democrats lost two Congressional seats.

Some Democrats said they warned the Biden campaign it was taking the support of Latinos and non-white voters for granted in the state.

“Imagine having seasoned Puerto Rican and Black political operatives in Florida. Now imagine hiring none of them when it mattered, not listening to any of us when we offered advice, and hav[ing] the hubris of feeling infallible,” Frederick Velez III Burgos, national director of civic engagement the Hispanic Federation, an advocacy group, wrote on Twitter. “That is how Florida was lost.”

Mr. Trump even improved his standing in the Rio Grande Valley, a traditionally Democratic and heavily Latino region of South Texas that has been the focus of the President’s efforts to build a wall along the U.S.-Mexico border. Democrats had spent heavily in Texas in hopes of flipping the state, a victory that would have all but assured Mr. Biden won the White House.

Some analysts pointed to the Trump campaign’s willingness to engage in door-to-door canvassing as responsible for boosting support among Latino voters in Texas. Democrats accused Mr. Trump of being reckless and irresponsible by running in-person events during a pandemic that has killed more than 240,000 Americans. But the strategy may have given him the edge over Mr. Biden, whose campaign relied more on virtual events and advertising.

“The biggest mistake the Democrats made — and they will rue this — is when they decided to...virtue signal [that] they weren’t going to go door-to-door,” Dave Carney, chief political adviser to Texas Governor Greg Abbott, told the Texas Tribune.

Mr. Trump’s efforts to urge supporters to vote in person — rather than by mail — and his decision to hold large-scale rallies in the weeks leading up to the election also seemed to encourage his base to show up in large numbers on election day. While Mr. Biden won among voters who cast ballots by mail in Southern states, exit polls showed Mr. Trump won among those who voted in person, both early and on Tuesday.

Turnout appeared to be up in many of the smaller cities and rural areas of states like Florida, Georgia and Texas that had supported Mr. Trump in 2016. Turnout reached nearly 90 per cent in the Florida counties of Collier and Sumter, both Republican strongholds.

But even as Mr. Trump managed to turn out waves of his core supporters, he also appeared to turn off many moderate voters in fast-growing suburbs of the Sun Belt. Exit polls showed Mr. Trump consistently struggled among moderate voters in Southern and Western states - and did particularly poorly among college-educated women in the suburbs.

Mr. Trump lost ground in cities like Dallas and Austin, along with their suburbs, which shaved his margin of victory in Texas to six points, down from nine in 2016. The candidates also remained locked in a tight battle for the suburbs of North Carolina, where Democrats managed to flip two Congressional seats.

But it was suburban Phoenix that dealt Mr. Trump his most significant blow of the election, helping tilt Arizona in favour of Mr. Biden. Should he win, it would be only the second time the state backed a Democratic presidential candidate in 70 years.

With losses in Michigan and Wisconsin and potentially Nevada, defeat in Arizona could be enough to cost Mr. Trump the White House.

Still, analysts warn that should Mr. Trump lose the election, the result would be far from a repudiation of the President’s divisive brand of populist politics.

Mr. Trump “showed us holes in the system that were always there but never so serious,” said Samuel Popkin, a retired political scientist from the University of California, San Diego. “When a lot of people lose faith in the central tenets of a political party, they’re available for the right promise-making outsider.”

That will present a continuing challenge both for Republicans and Democrats over the next four years, said Donald Critchlow, Katzin Family Professor at Arizona State University . “The fight will be over which party can capture this pervasive anti-elitist populist sentiment evident among voters.” 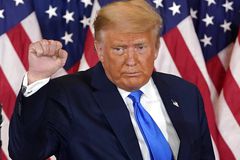 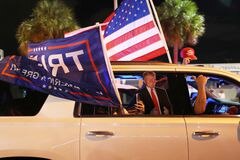 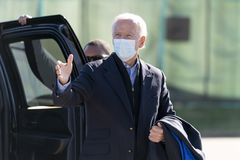