All three victims were American residents, Australian authorities said, adding that they did not immediately know why the plane crashed.

“Tragically, there appears to be no survivors as a result of the crash down in the Snowy Monaro area,” said Shane Fitzsimmons, the Rural Fire Services Commissioner for New South Wales state.

“(The tanker) impacted heavily with the ground and initial reports are that there was a large fireball associated with the impact of the plane as it hit the ground. There is no indication at this stage of what’s caused the accident.”

Fitzsimmons said the plane had been leased by Canadian aerial firefighting company Coulson Aviation, which has a second C-130 Hercules working in the Australian bushfires operation.

Coulson had grounded its large air tanker fleet following the accident, pending a review to ensure there is no systemic issue like a fuel problem

The Canadian company has been operating under contract with the Australian National Aerial Firefighting Centre since 2000, according to the company.

The crash takes the death toll from hundreds of wildfires in Australia to 32 since September. An estimated 1 billion animals have also perished, while the fires have incinerated 2,500 homes and a total area of bushland one-third the size of Germany.

Authorities had previously said the tanker was flying in the state’s Snowy Monaro region, south of the capital Canberra.

According to its flight data, the aircraft departed the Richmond air force base in western Sydney around 12:15 p.m. (0115 GMT). It dropped off radar just after 2 p.m.

Peak View is close to a blaze burning out of control in the Wadbilliga National Park, the fire service said.

Such air tankers typically carry 15,000 litres of water or fire retardant to be released over fires, which can help contain blazes in areas ground crews find hard to reach.

Belinda Greene, a receptionist at the Bredbo Inn Hotel near the crash site, said she heard police cars racing by in the early afternoon.

“We saw a lot of smoke all of a sudden a couple of hours ago,” she told Reuters by telephone.

Authorities have closed the airport in Canberra, the capital, as two emergency-level fires joined into a single out-of-control fire nearby.

Residents and businesses near fires were told it was too late to leave as thick plumes of dark smoke smothered the neighbouring suburbs.

Here are today’s key events in the bushfire crisis:

* NSW firefighters were tackling 90 fires, with one in the Snowy Mountains area and one on the south coast in Bega Valley at emergency warning levels. In Victoria state there were 17 blazes, with one of those, in the state’s northeast, at the “watch and act” warning level.

* Sydney was set for a hot and windy day, with a high temperature of 41 degrees Celsius, while the capital Canberra was forecast to hit 33 degrees C, accompanied by windy conditions and dust haze, the Bureau of Meteorology said.

* Heavy rain in Melbourne dumped dust fanned up by heavy winds into the Yarra River. However, air quality in the city was rated “good” as the rain doused haze that had affected players at the Australian Open tennis tournament. Last week, a player collapsed in a coughing fit from bushfire smoke during qualifying rounds.

* The Victorian state government on Thursday said it would spend A$17.5 million immediately to save wildlife hit by the bushfires. It planned to focus on species most at risk, including the brush-tailed rock wallaby, the state’s most endangered mammal, and the long-footed potaroo and large brown tree frog.

* Economists have estimated the cost of the bushfires to Australia’s A$1.95 trillion ($1.33 trillion) economy could be as high as A$5 billion ($3.4 billion). That would shave around 0.25 points off gross domestic product in the December and March quarters, a development that could prompt the country’s central bank to cut rates as early as February and lower its growth projections.

* United Airlines Chief Commercial Officer Andrew Nocella on Wednesday said the airline was watching routes in Australia very carefully. “The wildfires really had some impact on demand, so we’ll keep a close eye on that,” he told analysts on an earnings call.

* A Reuters analysis shows that Australian animals living in specific habitats, such as mountain lizards, leaf-tailed geckos and pear-shaped frogs, are battling the threat of extinction after fierce bushfires razed large areas of their homes.

Australia briefly evacuates parts of its capital after bushfire breaks out near airport
January 22, 2020 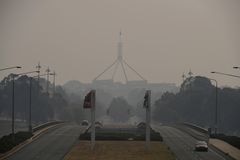 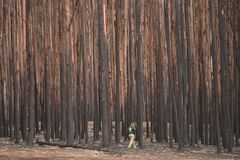