Africa’s fastest-growing Islamist insurgency is triggering a dramatic rise in hunger and a refugee exodus across three countries in the Sahel region of West Africa, leaving thousands of civilians dead and millions at risk of food shortages.

Local and international troops are “over-matched” by the intensifying attacks from violent extremist militias in Mali, Niger and Burkina Faso, forcing armies to switch to a strategy of merely trying to “contain” the insurgency, the U.S. military admitted in a report this week.

Mali is planning to recruit another 10,000 troops to fight the rebels; France is deploying a further 600 soldiers to reinforce its 4,500 troops in the region; Chad is sending another battalion of reinforcements; and Canada is among many Western countries providing training of police and counterterrorism forces in the region.

But the military aid has failed to prevent the humanitarian catastrophe from growing worse. The region has suffered the most rapid increase in Islamist violent extremism of any region in Africa in recent years, with attacks doubling every year since 2015, according to data compiled by the Africa Center for Strategic Studies. 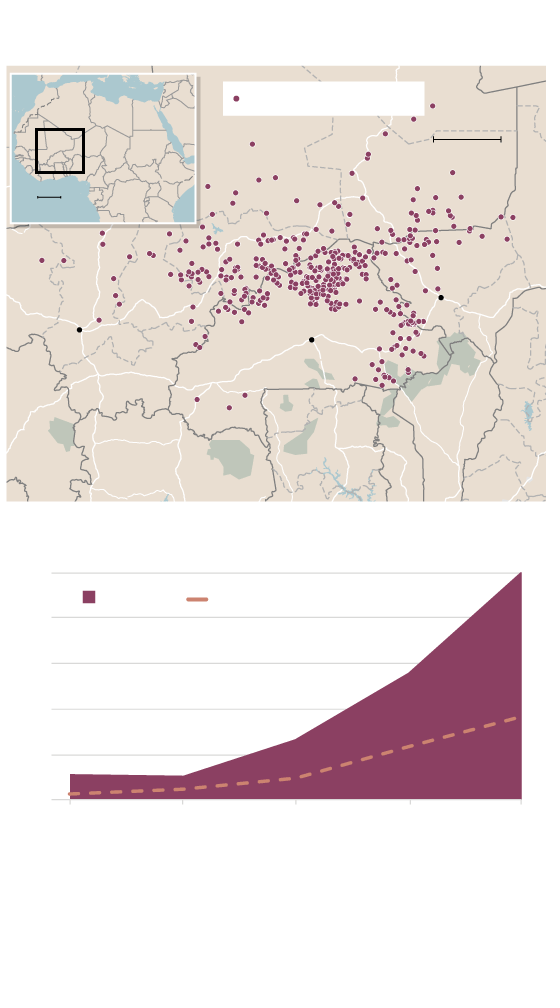 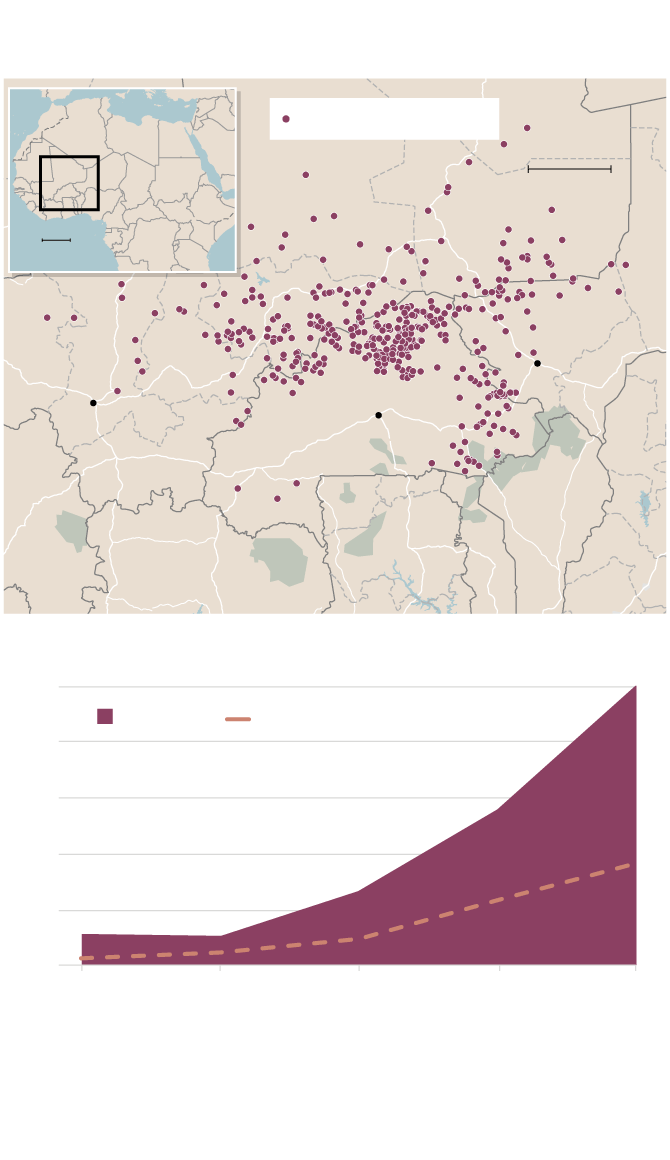 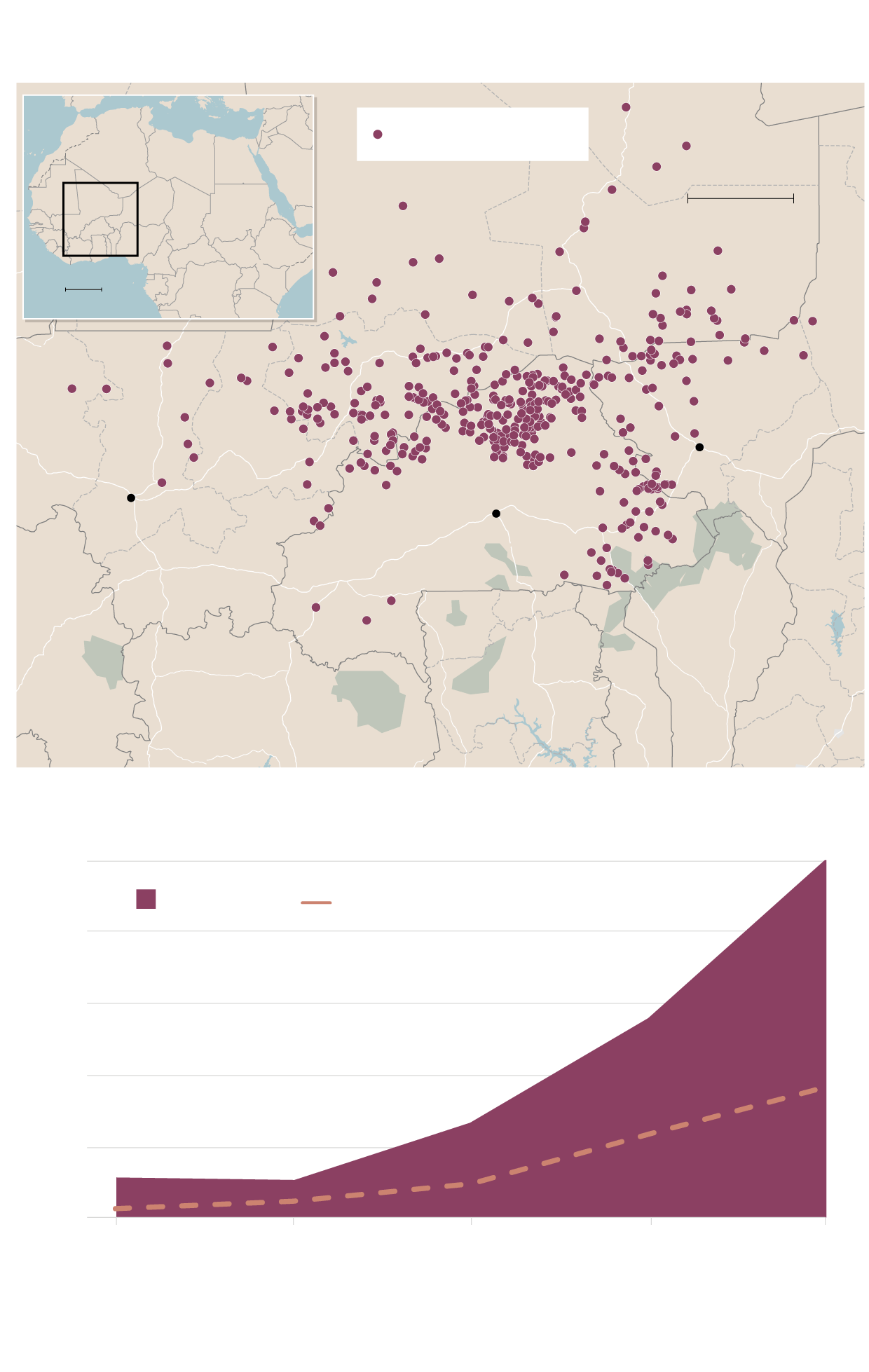 More than 4,000 civilians and soldiers were killed in the three countries last year, a fivefold increase since 2016, the United Nations says. Among the victims were 39 employees and contractors of Canadian mining company Semafo Inc., killed in a terrorist ambush of their bus convoy in Burkina Faso last November.

The insurgents have often attacked military bases in the region, killing at least 230 soldiers in Mali, Niger and Burkina Faso in the last quarter of 2019. The extremist groups are “neither contained nor degraded,” the Pentagon acknowledged in a report released this week by the inspectors-general of the Defense Department, State Department and U.S. Agency for International Development – the first such report to be declassified.

The attacks are causing a huge rise in displacement, as hundreds of thousands are uprooted from their homes. In Burkina Faso, the number of internally displaced people soared from 90,000 to about 560,000 last year, and the number could climb to 900,000 by April, making it the world’s fastest-growing displacement crisis, according to a report this week by Refugees International, a U.S.-based humanitarian organization.

Despite adequate harvests, extremist attacks have made it difficult for farmers to reach their fields and for food supplies to reach the needy. An estimated 3.3 million people need immediate food aid in the central Sahel region, and this could rise to 4.8 million by the middle of this year, UN agencies say.

“We are seeing a staggering rise in hunger in the central Sahel,” said Chris Nikoi, a regional director for the UN’s World Food Programme. “The number of food-insecure people has doubled after harvest time, when it should have dropped. Unless we act now, a whole generation is at risk.”

The extremist groups have continued to spread their influence across borders this year. On Sunday, gunmen attacked a police station in Benin near its border with Burkina Faso, killing one policeman and injuring another. There are growing fears the attacks will spread from the Sahel countries into the coastal countries of West Africa.

One of the worst-hit countries is Mali, where Canada deployed 250 peacekeepers in a 12-month mission that ended last August. The UN is spending about US$1-billion annually on a peacekeeping force of 13,000 troops in Mali. But in central Mali, more than 450 civilians were killed last year and hundreds were injured in the deadliest year since the insurgency began, Human Rights Watch said in a report this week.

“Today there is a problem of survival in the Sahel,” Malian President Ibrahim Boubacar Keïta told a conference in Rome on Tuesday. “We have been invaded by people who have not been invited into our country.”

Mr. Keïta, who was attending the annual meeting of the UN’s International Fund for Agricultural Development (IFAD), said the extremist attacks have created food shortages in some parts of Mali.

“The agricultural assets are very much threatened,” he said. “Farmers are being prevented from going to their fields. We had a 10-million-tonne record harvest of cereals but is still not enough. It is a matter of reaching areas mired in conflict.”

A report by IFAD warned that the Sahel is vulnerable to the combined effects of terrorism, climate change and rapid population growth, with the region’s population set to double in the next 20 years. In Mali, 4.3 million people are at risk of “increased food insecurity and starvation,” IFAD said in a statement.

Agricultural production is expected to fall in Mali by 17 per cent by 2050, the UN fund said. “Climate change is already hitting Mali and other Sahel countries hard, reducing arable land used to grow crops, pastures for herding animals and fish stocks, while exacerbating land conflicts and pushing people to migrate further south, or abroad.”

Under pressure from the escalating crisis, Mr. Keïta is finally opening the door to negotiations with senior jihadi leaders – an option he had rejected for many years.

“The number of deaths in the Sahel is becoming exponential and it’s time that certain avenues be explored,” Mr. Keïta said in an interview on Monday with France 24 and Radio France Internationale.

“Talking with jihadists and fighting terrorism is not contradictory,” he said. “I have a duty and a mission today to create all possible spaces and to do everything possible so that, by one means or another, some kind of appeasement can be achieved.”

The crisis is even worse in Burkina Faso, where the military is “inexperienced, underequipped and undertrained,” according to the Pentagon’s Africa command, quoted in the report by the inspectors-general this week.

As a result, extremist groups are “able to entrench themselves among local populations where state presence is lacking,” the report said.

The United States has established drone bases in the Sahel region and deployed troops to provide training for local armies, but the extremist attacks are “intensifying” and “have the potential to spread through the region and impact Western interests,” the report said.