The woman, grievously wounded in the mass shooting at a Walmart lay on an operating table at the University Medical Center of El Paso as the chief of surgery, Dr. Alan Tyroch, turned her to clean the exit wounds. He knew what to expect, but it was still a horrific sight. She had two gaping holes the size of a man’s fist in her side and a third the size of a silver dollar where bullets had burst from her body.

Those bullets had also shredded her intestine. Tyroch hooked her up to a colostomy bag and a feeding tube. And he reached into another wound to pull out a bullet lodged in her shinbone. It had been flattened by its violent impact into a disc the size of a quarter.

The tragedy in El Paso on Saturday, carried out by a gunman armed with an AK-47-style rifle, and another deadly massacre on Sunday in Dayton, Ohio, in which the gunman used an AR-15-style pistol modified to act as a rifle, can be measured in death tolls — 22 in El Paso and nine in Dayton. But the damage done by such weapons is witnessed most clearly by members of the medical staff who care for the wounded.

The story of their lifesaving labors at the El Paso hospital, the only one in a 270-mile radius prepared to treat complex trauma patients, is one of heroics in the face of violence, and of the doctors and nurses, who, once the adrenaline rush died down, struggled to live with the horror of what they had experienced.

Some of the patients rushed to the hospital needed more than one operation, like the woman treated by Tyroch. On Saturday, surgeons had quickly opened her abdomen, cleaned out feces and blood, and sent her, with a temporary patch over her open abdomen, to intensive care, heavily sedated and on a ventilator. They had to work fast, clearing the operating room to make way for other victims. Then Sunday, Tyroch spent three hours operating on her, repairing the damage as best he could.

Six days after the shooting, doctors were still trying to repair appalling wounds in some of those who survived. The suspect in the El Paso massacre is a 21-year-old man from a Dallas suburb who told police he was targeting Mexicans.

Tyroch had seen wounds from military-style weapons before, but he had never seen anything like the number of victims that showed up at his hospital Saturday — 14 in all, most shot more than once.

The back-to-back shootings in Texas and Ohio have led to renewed calls for a ban on assault rifles from some Democratic presidential candidates. On Friday, President Donald Trump called for the passage of laws for “meaningful” background checks on gun buyers.

Many American trauma doctors maintain that assault-style weapons do not belong in civilian hands, and having far more experience with gunshot wounds than their counterparts in other countries, they have grown all too familiar with the injuries that such weapons can inflict.

“In Texas, it seems like everyone and his brother owns a gun,” said Dr. Nancy Weber, an emergency department physician at the El Paso hospital. She said she could think of no reason to own an assault rifle unless it is for a military or policing purpose. “Look at the tragedy. We should have a nationwide, nonpartisan discussion.”

For Dr. Alejandro Rios Tovar, the ordeal began Saturday at 10:55 a.m. He had just returned home from a 30-hour shift at the hospital when he got a text from Tyroch.

“Active shooter. Anybody available return to the hospital immediately.”

Tovar, a surgeon, sped to the hospital, running red lights, and pulled into the parking lot 15 minutes later.

The first patient had already arrived in a police car. A few minutes later, the ambulances began roaring in, bringing one mangled patient, then another and another.

Members of the medical staff were arriving, too, for an intense rescue effort that included four general surgeons, a cardiac vascular surgeon, three orthopedic surgeons and three surgeons in other specialties, as well as the housekeeping staff, which hurried to mop blood from floors and to clean operating rooms so patients could be wheeled in one after another.

Everyone understood the urgency. One doctor, about to leave for vacation, rushed to the hospital and operated in jeans and a T-shirt — there was no time to change into surgical scrubs.

“Trauma is a team sport,” Tyroch said. “Everyone played a role.”

Weber stabilized patients as they came in. The mnemonic that emergency room doctors use to quickly evaluate patients is ABC — airway, breathing, circulation. The critical care area of the emergency room was just steps from the operating room, allowing doctors to work so quickly that they transfused what they said was a small amount of blood, considering the injuries: 109 units, about the amount in the bodies of 11 people.

The fourth patient arrived facedown on a stretcher, “shot through and through,” said Dr. Susan McLean, a surgeon and director of surgical critical care.

Another victim’s heart had stopped, though she had received cardiopulmonary resuscitation in the ambulance. The doctors shocked her heart into beating and opened her chest to look for active bleeding.

Most victims had multiple injuries, often in the torso, with damage to the intestines and chest. Many needed tubes to drain blood from the chest or had air leaking from the lungs. Many had shattered bones in the pelvis, arms or legs.

The doctors discovered a small miracle in the carnage: No patient had a brain injury or spinal cord injury.

But one victim, shot in the chest, bled to death in the ER. The others survived, but the initial surgeries were just the beginning.

“El Paso has never seen anything like this,” Weber said.

The first step for the most seriously injured was damage control: Surgeons operated only to fix the most pressing injuries, not even closing the abdomen before returning a patient to intensive care to wait for a more definitive operation the next day.

The doctors at University Medical performed eight surgeries the first day, four of which involved opening patients’ abdomens to control bleeding in areas like the intestines and diaphragms.

“We had to finish the case and get ready for the next one,” Tovar said. “And the majority of these patients are unstable. We don’t want to waste time closing the abdomen.”

On Sunday, the day after the shooting, three patients returned to general surgery to repair damage to soft tissue like muscles and to repair damage in their abdomens. Orthopedic surgeons took two more people into operating rooms, one of whom had a shattered pelvis.

As of Thursday, the operations were continuing, mostly repairs to shattered bones.

Eight patients remained in the hospital Friday, two in intensive care. One was in intermediate care, and five were on the surgical ward.

The days ahead will not be easy for patients. They risk serious complications — pneumonia, infections, blood clots.

“A complex trauma patient is a complication waiting to happen,” Tyroch said.

And the suffering doesn’t end when survivors of such shootings go home, researchers have found.

“If they leave the hospital alive, we claim we saved them,” said Dr. George Velmahos, chief of trauma surgery at Massachusetts General Hospital in Boston who was part of a team that treated victims of the Boston Marathon bombing in 2013. But years later many “still live with devastating pain or other problems, or PTSD. The long-term impact is really tremendous.”

The hospital staff will not be spared, either. As desperate patients arrived, the doctors and nurses set aside their emotions, McLean said.

The next day, as she and Tovar made rounds and spoke to patients, staff members were in tears. “It’s unreal what these patients went through,” she said. “It’s really shocking.”

Tyroch managed to maintain his composure until, driving home, he saw a familiar billboard: El Paso Strong. His emotions welled.

Weber barely made it to the privacy of her car late Saturday afternoon before the sobs came.

“There is a sense of relief when they say, ‘OK, there aren’t going to be any more victims’ — that’s the first time you take a deep breath,” she said.

“Then you go home and you cry and you pray and you hug your loved ones.”

Some of her colleagues may struggle with post-traumatic stress, Weber fears. “Doctors and nurses are not immune,” she said. “We see trauma and very traumatic deaths every day. But we don’t see 14 people in an hour, thank God.”

“What has to change?” she asked. “We have to do something. Why aren’t we?” 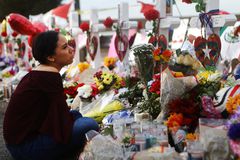 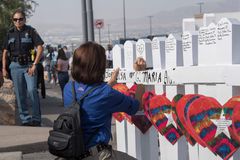