Another chapter in one of history’s most astonishing falls from grace will be written this week when Myanmar’s former democracy icon, Aung San Suu Kyi, appears at the International Court of Justice to defend her country’s military against allegations of genocide.

A Nobel Peace Prize laureate previously mentioned in the same breath as Nelson Mandela and Mahatma Gandhi, Ms. Suu Kyi’s international reputation has been badly tarnished by her repeated denials that Myanmar’s military actions against the country’s Rohingya population – which has seen at least 10,000 people killed and more than 700,000 driven from their homes since 2016 – amount to ethnic cleansing.

Canada stripped Ms. Suu Kyi of her honorary citizenship last year over her failure to speak out in defence of the Rohingya.

Bob Rae, Canada’s special envoy to Myanmar, said Canada had “facilitated” the presence of some of the Rohingya activists in The Hague for the proceedings. “It’s very much part of our approach to this issue, to give a voice to the Rohingya,” said Mr. Rae, who is there as an observer. He would not divulge further details.

In the groundbreaking case, the tiny African country of Gambia has accused Myanmar of violating the 1948 Genocide Convention – a document to which both countries are signatories – and is asking the ICJ to order Myanmar to cease continuing “genocidal acts” and to bring those responsible to justice.

It’s the first time the ICJ will hear a genocide case since the Balkan Wars of the 1990s and the first case that involves a party that is neither directly involved nor a neighbour.

This week’s proceedings are also remarkable in that the lead lawyers for both Gambia and Myanmar are veteran Canadian international lawyers: McGill University professor Payam Akhavan will make the argument that the ICJ needs to intervene in Myanmar; William Schabas, a former professor of international law at the University of Quebec at Montreal, will argue on behalf of the Myanmar government.

Ms. Suu Kyi, who spent 15 years under house arrest for her opposition to military rule in her country, has no authority over the army; she is the leader of the civilian government, which has shared power with the military since early 2016. In her capacity as de facto prime minister, she has propagated the narrative that reports of mass rapes and murders have been exaggerated and that the army’s actions were an appropriate response to a series of attacks by insurgents in 2017 on police outposts in Myanmar’s western Rakhine State, where the predominantly Muslim Rohingya make up a majority of the population.

Ms. Suu Kyi – whose appearance before the ICJ is unprecedented for a sitting head of government – is expected to repeat those arguments this week as she represents her government at a unique legal proceeding in The Hague.

The evidence that Gambian Justice Minister Abubacarr Tambadou – a former war-crimes prosecutor who served on the tribunal that investigated the 1994 genocide in Rwanda – can draw from in his opening statement is overwhelming. Last year, a United Nations fact-finding mission declared it had found that “the gravest crimes under international law” had been committed and called for six of Myanmar’s top generals to be tried for genocide, crimes against humanity and war crimes.

The ICJ case, which is supported by the 57-member Organization of Islamic Cooperation, as well as several Western governments, including Canada’s, is part of a multipronged international push to seek justice for the Rohingya. In a joint statement Monday, Canada and the Netherlands said they welcomed Gambia’s case and would “jointly explore all options to support” the African country so the court “can provide judgment on whether acts of genocide have been committed.”

A separate investigation has been opened by the International Criminal Court, which is also based in The Hague. Where the ICJ is primarily a court of arbitration for resolving disputes between countries, the ICC prosecutes the individuals responsible for alleged war crimes and crimes against humanity.

“I think the main message of this entire process is about the rule of law and whether we can actually stop an ongoing crime against humanity, an ongoing genocide, and not allow people to get away with it with complete impunity. That’s why a lot’s at stake in this process,” Mr. Rae said.

Some of the drama is expected to unfold outside the Peace Palace, as the building that houses the ICJ is known. Rohingya activists, as well as supporters of the Myanmar government – a group of whom travelled to The Hague along with Ms. Suu Kyi – are expected to hold rival demonstrations Tuesday, when Gambia will lay out its case to the 17-judge panel, and on Wednesday, when Ms. Suu Kyi is scheduled to give her rebuttal.

After Mr. Tambadou makes his opening remarks, Mr. Akhavan – a veteran of the Rwanda and Yugoslavia tribunals – is expected to implore the ICJ to take action to protect those Rohingya still living in western Myanmar. The most recent UN fact-finding mission reported in September that the 600,000 Rohingya still in Rakhine State were living in “deplorable” conditions and that the threat of further genocide remained.

“Nothing we do is going to bring back the dead or undo the horrible things that have been done,” Mr. Akhavan said in an interview. “But some justice is better than no justice at all.”

On Wednesday, after Ms. Suu Kyi makes her opening remarks, Mr. Schabas will lay out the Myanmar government’s legal reply.

When contacted by The Globe and Mail, Mr. Schabas directed questions to a spokesperson for Myanmar’s Ministry of Foreign Affairs, who did not reply to an e-mail.

The presence of Ms. Suu Kyi in The Hague this week guarantees international attention will be focused on what might otherwise have been a lower-profile affair. But the damage to her international reputation may be less important to her than positioning herself ahead of Myanmar’s elections next year.

“I think she’s upholding what she considers to be the interests of her state. It’s a way to position herself as the continuing leader of the country,” Mr. Rae said. “That’s the political calculation, I believe. Whether it’s a risk or not is not for me to say.”

Antonia Mulvey, a lawyer with Legal Action Worldwide, a non-governmental organization representing some of the Rohingya victims, said Ms. Suu Kyi is among those who should be held accountable for what happened in Rakhine State.

“Aung San Suu Kyi did nothing to stop the killing,” Ms. Mulvey said in a statement. “She could have asked for help from the international community at the time. And now, as the final insult, she’s defending the Army’s behaviour in court.” 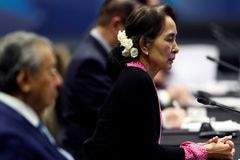 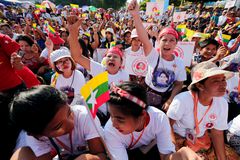