The Syrian government on Monday condemned the evacuation of hundreds of Syrian White Helmet rescue workers and their families with the help of Israeli soldiers, calling it a “criminal operation” undertaken by “Israel and its tools”.

The rescue workers and their families crossed out of Syria into the Israeli-occupied Golan Heights before arriving in Jordan over the weekend, fleeing an offensive by Syria and its Russian ally to take control of southwest Syria from rebels.

In a related development Monday, Israel rebuffed a new Russian offer to keep Iranian forces in Syria away from the Golan Heights ceasefire line, an Israeli official said.

The Russian proposal was raised in a meeting between Israeli Prime Minister Benjamin Netanyahu and Russia’s top diplomat and top general, dispatched to Jerusalem as Syrian government forces routed rebels near the Golan.

Israel said it had helped with the evacuation of the White Helmets at the request of U.S. President Donald Trump and other leaders - and there had been fears that the rescue workers’ lives were at risk.

The White Helmets was established as a rescue service in rebel-held areas of the country, where its volunteers have often worked to save people trapped under the rubble of government bombardment.

Syrian state news agency SANA, citing a foreign ministry official, said the evacuation “exposed the true nature of the organisation known as the White Helmets”, calling it a risk to stability and security “because of its terrorist nature”.

The group said its people and buildings have been specifically targeted by the Syrian government and its allies throughout the more than seven-year-old war.

In a statement on Monday the group said during the southwest campaign four of its volunteers were killed and dozens injured, four White Helmet centres were hit and rescue vehicles were destroyed by Syrian government bombardment.

“Since our formation, 251 volunteers have been killed in the line of duty, the majority from ‘double-tap strikes’,” the group said.

The White Helmets said 98 male and female volunteers and 324 family members were now in Jordan, having travelled through the occupied Golan Heights.

As Assad has won back areas such as eastern Aleppo and Ghouta, the rescue workers have left on buses to rebel-held areas of the north as part of agreed surrender deals, along with fighters and civilians who fear a return of government rule.

In the southwestern campaign, however, the White Helmets said the deals agreed “did not include any guarantees of safe passage for displaced humanitarian workers to other areas of Syria”, making the international evacuation necessary.

“It was the only alternative for our trapped volunteers who would otherwise have faced detention or death at the hands of the Syrian regime and its ally Russia,” it said.

A Jordanian government source said the evacuees will be kept in a “closed” location in Jordan and resettled in Britain, Germany and Canada within three months.

A second non-Jordanian source said the original plan had been to evacuate 800 people, but only 422 made it out as operations were hampered by government checkpoints and the expansion of Islamic State in the area.

Meanwhile, after Monday’s meeting with Russian Foreign Minister Sergei Lavrov, Netanyahu said a Russian offer to keep Iranian forces 100 kilometres from the border was not enough, according to an Israeli official, who spoke on condition of anonymity.

“The Russians are speaking about (the 100-kilometre buffer zone) and are committed to it, but we said there are also long-range weapons beyond this zone, and all those forces must leave Syria,” the official said.

Israel had previously turned down a proposal by Russia, the big-power backer of al-Assad, that Iranian forces be kept 80 kilometres from the frontier, according to Israeli officials.

Netanyahu held talks with President Vladimir Putin in Moscow on July 11 amid Israeli concern that Assad, an old adversary, might defy a 1974 demilitarization deal on the Golan or allow his Iranian and Lebanese Hezbollah allies to deploy there.

Russia has said it wants to see the separation of forces on the frontier preserved. Lavrov’s deputy, Grigory Karasin, told Russian media the foreign minister’s trip was “urgent and important.”

Before the meeting, Netanyahu also reaffirmed “Israel will continue to act against any attempt by Iran and its proxies to entrench militarily in Syria.” 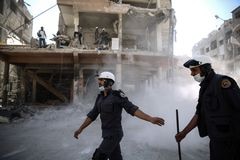