The pencil minaret of the Ottoman Adliyeh mosque in Syria’s Aleppo lists to one side and is scored by an ugly gash running down its flank, the result of bombing in the war.

The sorry state of Aleppo’s Old City, a labyrinthine World Heritage Site and a battlefield from 2012-16, is obvious from a glance across the skyline at its shell-beaten minarets.

They look down on an area that suffered massive damage in a conflict that brought down the medieval covered souk, smashed mosque domes and burnt churches.

The UN cultural agency UNESCO in December said 10 per cent of Aleppo’s historic buildings were destroyed and more than half the buildings they assessed showed severe to moderate damage.

But restoration work in Syria is controversial. With the exception of Islamic State, which deliberately targeted ancient ruins, all sides in the war have portrayed themselves as guardians of historical sites and their enemies as vandals.

A huge image of President Bashar al-Assad dangles from the monumental gateway of the ancient citadel in central Aleppo.

Western countries that have imposed sanctions on Assad’s government oppose any reconstruction work until there is a political solution to the conflict, arguing it would reward him for war crimes they say he has committed but which he denies.

But that has cut off most funding from the nations that are normally top donors for cultural work – prompting state media to accuse them of complicity in destroying Syrian heritage.

A few of the most famous monuments are slowly recovering. At the Umayad Mosque, bullet-scarred walls are being refaced and the stones of the fallen minaret are piled ready to be rebuilt under a yellow crane.

One of the tallest, loveliest stretches of the souk has already been restored, its collapsed domes rising again high above the cobbled floor using original materials and techniques.

But these sites represent only a fraction of the Old City’s myriad historical streets and buildings and, without fresh funding, the others risk falling into yet grimmer ruin.

“If there are funds I am optimistic that it will all be restored. We only need the money,” said Bassil al-Zaher, an engineer who is restoring part of the souk.

At the Halawiya Madrasa, part of the dome has already caved in. It was once a Byzantine cathedral, built on the site of a Roman temple, and was converted to a mosque by a Muslim ruler during the Christian Crusades. With more rain, the rest of the dome will fall, an engineer there said.

From the roof of the restored Saqatiyeh section of the souk, damaged minarets can be seen punctuating the Old City’s skyline.

The 18th-century Kemaliyeh mosque, the Mamlouk-era Siffahiyeh mosque and the 14th-century Tawashi mosque have all suffered considerable damage.

Viewed from close up, it is hard to see how the 16th-century Adliyeh mosque’s minaret is still standing. The hollow interior and tightly wound spiral stairs inside are clearly visible through a monstrous shell hole on its west side.

“The best solution is to rebuild it because it is not straight. Even if there’s a small earthquake, it would collapse,” said Zaher.

Work on mosques is the domain of the Ministry of Awqaf or Islamic endowments, and it lacks the money for major repairs.

At the medieval Mehmindar Mosque, the minaret above the door is now a stump. In the courtyard two men, the imam and a friend, were hauling large stones to one side to clear the floor.

The mosque’s dome is also shattered, with only a corner left. They have spent three months clearing and sorting the stones and have no idea when or if the minaret will be rebuilt.

Each covered street in the Old City seems to harbour a dozen alleys, each alleyway hidden stone courtyards ringed by mosques or shops, with olive and lemon trees growing in the centre.

Down one street, under a high vaulted ceiling, most shops were empty, their floors covered in debris and their walls scorched. But a man sat at a table in one, singing Koranic verses, his melodic voice echoing softly through the souk.

Near Bab al-Nasr, one of the historic gates into the Old City, few of the traders have reopened their stalls. Metal shutters hang down and the streets are quiet.

A local group worked in this area to clear debris and restore parts of the old gateway and nearby buildings, including two large, protruding, wooden windows.

The UN Development Project is also at work, providing traders with aid to clear shops and buy fittings and stock.

Ahmed Sabbagh’s pistachio shop has been in his family for generations. He has just reopened it.

But in the Attariyeh souk, the destruction is almost complete. The roofs have collapsed and old thoroughfares where traders once shouted their wares are now narrow, overgrown lanes between neatly stacked piles of stone under a hot white sky. 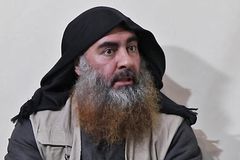 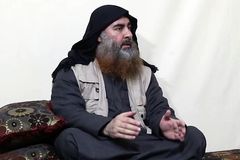 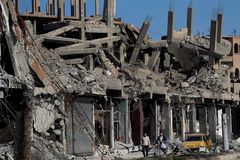