Taliban militants will not take part in intra-Afghan talks until the Afghan government releases about 5,000 of their prisoners, a spokesman said on Monday, presenting a major possible barrier to ending the war.

The statement came as a reduction of violence period came to an end, and the Taliban said a resumption of operations against Afghan government forces could now take place.

Under an accord between the U.S. and the Islamist Taliban signed on Saturday, the two sides are committed to working toward the release of combat and political prisoners as a confidence-building measure.

The agreement calls for up to 5,000 Taliban prisoners to be freed in exchange for up to 1,000 Afghan government captives by March 10. Afghan President Ashraf Ghani, not involved in the talks, has rejected that demand.

“We are fully ready for the intra-Afghan talks, but we are waiting for the release of our 5,000 prisoners,” Taliban spokesman Zabihullah Mujahid told Reuters by phone.

The U.S. has said that after more than 18 years of war, it hopes negotiations towards a permanent political settlement and ceasefire can start in coming days, but Western diplomats and analysts see stark challenges ahead.

Mr. Ghani said on Sunday U.S. President Donald Trump had not asked for prisoner releases and that this issue should be tackled as part of a comprehensive peace deal.

“The Afghan government has not made any commitment to release 5,000 Taliban prisoners before the start of any potential negotiation,” Sediq Sediqqi, a spokesman for Mr. Ghani, said in response to the Taliban’s statements on Monday.

A joint U.S.-Afghan government statement says the Kabul government will take part in discussions on the “feasibility of releasing significant numbers of prisoners on both sides” but does not mention the specific number or time frame.

U.S.-led forces ousted the hardline Islamist militants from power in 2001.

The Taliban’s Mujahid said a deal on a reduction in violence in the seven days leading up to Saturday’s pact had formally ended.

“As we are receiving reports that people are enjoying the reduction in violence, we don’t want to spoil their happiness, but it does not mean that we will not take our normal military activities back to the level that we were before,” he said.

“It could be any time, it could be after an hour, tonight, tomorrow or the day after.”

Two Taliban leaders who declined to be named said the group had initially decided to extend the reduction in violence period for two days beyond Saturday. At a meeting on Monday, the Taliban decided the arrangement would continue to apply to U.S. forces but would end for Afghan government forces, they said.

A senior NATO defence source told Reuters that the reduction of violence period was indeed technically over, meaning technically the Taliban could attack Afghan forces.

But U.S. General Scott Miller, commander of NATO forces in Afghanistan, said that the U.S. expected the Taliban to “be very serious” about their obligations.

“The reduction in violence was a confidence builder … The United States has been very clear about our expectations – the violence must remain low,” he said in a tweet.

On Monday, the top U.S. general said that it was unlikely that violence in Afghanistan would go down to zero.

U.S. Defense Secretary Mark Esper, at the same news conference, said that the number of U.S. troops in Afghanistan would go down to 8,600, and that the U.S. would then stop and assess the situation.

An explosion at a football field in Afghanistan’s southeastern province of Khost killed at least three civilians and injured 11 on Monday, the interior ministry said. There was no immediate claim of responsibility. Mr. Mujahid issued a statement denying any Taliban involvement.

The Afghan war has been in stalemate for more than 18 years, with Taliban forces controlling or contesting more territory yet unable to capture and hold major urban centres.

A full withdrawal of all U.S. and coalition forces would occur within 14 months, a joint statement said. The withdrawal depends on security guarantees by the Taliban. 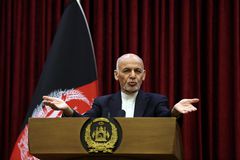 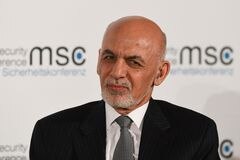