Texas lawmakers traveled down starkly divergent political paths Tuesday, as Republicans in Austin signaled their intention to push forward with an overhaul of the state’s election system while Democrats who had fled the state a day earlier began lobbying lawmakers in Congress to pass comprehensive federal voting rights legislation.

But Democrats, as long as they remain away from Texas, appear likely to be able to hold off the GOP effort for now. Chris Turner, the Texas House Democratic leader, said that 57 members of the party’s delegation were now absent from Austin, more than the 51 necessary to stop business from proceeding. They have pledged to remain in Washington for the duration of the Texas session, and Republicans do not appear to have a legal way to bring them back from Washington.

“Best I know, Texas law enforcement doesn’t have jurisdiction outside the state of Texas,” Turner said Tuesday outside the Capitol.

On Tuesday evening, in a vote that was by turns symbolic and incremental, the Texas state Senate passed Republicans’ sweeping election overhaul bill by a party-line vote of 18-4; the nine Democratic senators who did not cast a vote had left Austin to join the House Democrats who fled the state Monday.

Without a quorum in the House, any bill passed by the Senate cannot advance, effectively killing any bill for this session and rendering most votes in the Senate as more of a messaging tactic to demonstrate Senate Republicans’ resolve to pass an election bill.

But in the event that House Democrats do return to the Capitol during this special session, the bill would still be considered live and ready for the House to take it up should it choose to do so.

In the meantime, furious Texas Republicans sought on Tuesday to pursue other means of retribution against the Democratic lawmakers, with Abbott threatening to detain them as soon as they return to the state, and other GOP leaders warning that they might remove Democrats from leadership positions in the Legislature.

Even as national Democrats celebrated the state lawmakers who fled, the party faces wrenching disagreements over its strategy on voting rights. With President Joe Biden facing rising pressure from Democrats to treat voting as a top priority, he gave an impassioned speech on the issue in Philadelphia on Tuesday, and Vice President Kamala Harris met with Texas lawmakers shortly after the president’s speech.

In his speech, Biden forcefully reiterated his desire to pass federal voting legislation and lashed out at Republicans for seeking to make voting harder and to make it easier to challenge the results of future elections. “Have you no shame?” he asked.

“We must pass the For the People Act,” Biden said. “It’s a national imperative.”

But in the roughly 23-minute address, the president remained silent on the filibuster, which stands in the way of any voting legislation in the Senate, and offered few specifics on how Democrats might pass a voting bill through a narrowly divided Congress.

Harris, appearing with senior members of the White House political strategy office, was greeted with a standing ovation by the Texas lawmakers, as she reiterated the administration’s commitment to voting rights.

“I know what you have done comes with great sacrifice, both personal and political,” Harris said, according to pool reports.

In Texas, Democrats were not entirely united, with some members of the party’s Senate delegation failing to follow their House counterparts in blocking a quorum. While several Democratic state senators decamped to Washington, four of the 13 Democrats in the state Senate remained in Austin on Tuesday morning.

“I understand the bold action” of House representatives and state senators leaving, state Sen. John Whitmire, a Democrat from Houston, said in a brief interview in his office shortly before heading to the Senate chamber. “I personally think you have to make a decision where you think you’re going to be most effective, and I thin today mine’s on the Senate floor.”

Republicans in Texas, for their part, denounced Democrats’ decision to flee.

“This is political theater, by and for Texas Democrats,” state Rep. Jim Murphy, chair of the Republican House caucus in Texas, said at a news conference hours after House Republicans voted to send law enforcement to track down missing members. “These Democrats have walked off the job twice now, and abandoned their obligation to represent you.”

Republicans in the House spent the majority of the news conference highlighting other issues – like changes to Child Protective Services, teacher salaries and health benefits – that would no longer receive time on the floor.

“If Democrat members of the House care about the children, they will come home and fight for them to get the safety and protection that they need,” said state Rep. Jacey Jetton, a Republican from outside Houston.

The special session was called by Abbott after Democrats in the state House stymied Republicans’ original election overhaul bill in May by using a similar walkout tactic, although in that case, they merely fled the chamber, not the state.

In Washington on Tuesday, outside the Capitol under a scorching morning sun, 47 Democratic Texas state representatives urged the White House and Senate Democrats to push for the For the People Act, the party’s major federal voting legislation that has faltered because of the Senate’s 60-vote threshold to pass most bills.

The lawmakers tried to deflect Republican criticism that they were abdicating their legislative responsibilities, saying that they were in Washington on a “working trip.”

“I’m not up here to take a vacation,” said state Rep. Senfronia Thompson, who was first elected to represent her Houston-area district in 1972. “We have fought too long and too hard in this country, and it was a Texan called Johnson, President Lyndon B. Johnson, on Aug. 6, 1965, who made sure that we had the right to vote.”

The Texas lawmakers planned to split up in groups to talk with Democratic senators. Meetings were scheduled Tuesday with Chuck Schumer, the majority leader; Cory Booker of New Jersey; Kirsten Gillibrand of New York; and Alex Padilla of California.

They had not yet succeeded in securing an audience with Sen. Kyrsten Sinema of Arizona, who along with Sen. Joe Manchin of West Virginia has been a stalwart defender of the 60-vote threshold to pass most legislation. But the Texans are expected to meet with Manchin later this week, an aide to the senator said.

“We have got to get in to see Sinema,” said state Rep. Jasmine Crockett of Dallas.

In Austin, where the state House had no business to conduct, members mingled among themselves and browsed on their computers. Doors to the chamber were locked – and permission slips were required to leave – after members voted 76-4 to place a “call on the House” and order law enforcement to round up missing members. The dissenting votes came from the four remaining Democrats.

To prevent Republicans from passing their election bill in the current special session, which began July 8 and will last for 30 days, Democratic state representatives must stay out of the state for more than three weeks. After that, Abbott could call a new special session.

The election legislation that Republicans have proposed is very similar to the bill the party originally introduced this year, with restrictions on voting that would most likely have a disproportionate impact on poorer communities and communities of color, especially in Harris County, the largest county in the state, which is trending Democratic.

The new bills, introduced in the state House and Senate, include provisions aimed at Harris County. Among the provisions are bans on drive-thru voting and 24-hour voting, which were pioneered by the county last year. Nearly 140,000 voters in Harris County used one of the two methods in 2020.

The bills also include broad statewide changes, including new identification requirements for absentee ballots and a measure that prohibits election officials and third-party groups from proactively sending absentee ballot applications to voters who have not requested them.

For voting rights groups and Democrats, some of the most worrying provisions in the Texas bills are ones that would greatly expand the authority and autonomy of partisan poll watchers. Originally meant to serve as an outside check on the electoral process for candidates and political parties, poll watchers have become increasingly aggressive in some states, including Texas.

That has raised fears that poll watchers, as they have repeatedly in U.S. elections over the years, will increasingly be used to intimidate voters and election workers, often in Democratic-leaning communities of color. During the 2020 election, former President Donald Trump’s campaign promoted its “army” of poll watchers as he implored supporters to venture into heavily Black and Latino cities and hunt for voter fraud.

Democrats were able to gain some minor concessions in the bill. A ballot-curing provision – which allows voters to fix their ballot if there were any problems with it – was added, and an extra hour of early in-person voting was added for weekday voting. Two of the most controversial provisions from the original bill – a limit on Sunday voting and a measure making it easier to overturn election results – were also removed from the current versions, which meant that the bills no longer include measures allowing for a significant partisan takeover of election administration, of the kind that Republicans have passed in Georgia, Arkansas and other states. 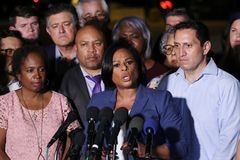