After a more than a decade of political strife, including a military coup and a contentious election less than two months ago, the people of Thailand are witnessing this weekend the coronation of King Maha Vajiralongkorn in a centuries-old royal tradition that last happened seven decades ago.

The coronation represents a renewal of the monarchy’s power after the October 2016 death of Vajiralongkorn’s revered father, King Bhumibol Adulyadej.

The 66-year-old Vajiralongkorn has served as king since then. But to be fully and formally invested with regal power and to ensure his legitimacy, he will be consecrated in an elaborate series of ancient rites that culminate in three days of elaborate pageantry.

The main ceremony will take place Saturday, when Vajiralongkorn will put on a crown, more than 200 years old, 66 centimetres (26 inches) high, weighing 7.3 kilograms (16 pounds) and ornamented with diamonds set in gold enamel. Other events include a parade and an appearance by the monarch on a balcony of the Grand Palace in Bangkok.

“This ceremony is significant to Thailand because the monarchy ... is a very important institution of our country and is the soul of our nation,” said Naowarat Buakluan, a 41-year-old civil servant. “If you ask why the ceremony is being held this year when his majesty has already ascended the throne, it’s because this is the right moment. Previously we Thais were mourning the loss of our beloved late king.”

Vajiralongkorn inherits a nation in political turmoil, with the powerful army entrenched in government for five years after staging a coup in 2014. An election held in March has been widely seen as rigged through convoluted election laws to favour the military and its preferred candidate, Prayuth Chan-ocha, who led the coup and has headed the government since then.

Vajiralongkorn has tightened control over royal institutions and what amounts to political privileges. He surprised the country’s ruling junta when, “to ensure his royal powers,” he requested changes to a new constitution that had already been approved in a referendum. They acquiesced. The powers he acquired centralize royal authority in his hands and make explicit his right to intervene in government affairs, especially in times of political crisis.

Sulak Sivaraksa, a prominent intellectual and social critic, said he doesn’t expect Vajiralongkorn’s coronation to differ much in style from his father’s — though Thailand did not have television broadcasts in 1950, and this weekend’s events will have blanket coverage across all channels, with looks inside the palace that ordinary people could only have dreamed of 69 years ago.

Vajiralongkorn, said Sulak, “doesn’t like ceremony himself, personally, but when it is performed he wants it to be proper.” When his father was cremated in 2017, Vajiralongkorn “insisted that everything had to be done properly.”

A book on the history of Thai coronations vividly described the high point of what was just one of the ceremonies in preparation for Bhumibol’s 1950 coronation.

“When the auspicious time arrived, the royal astrologer hit the Gong of Victory, the scribe and the royal augur began inscribing on the Royal Golden Plaques the official title of the King and the King’s Horoscope. At the same moment, the artisan also began to engrave the Royal Seal of State. During the whole period, monks were chanting auspicious prayer, Brahmins were blowing conch shells, while the royal officers of the Thai musical ensemble played their instruments.”

Saturday’s rituals include the royal purification ceremony at the Grand Palace, where holy water is showered over the king’s head. He then ascends the throne and sits beneath the 9-tiered umbrella, used only by the king, to receive the royal golden plaque, royal regalia and weapons of sovereignty, and his crown, among other symbols of the monarchy, from the chief Brahmin — a dignitary whose role reflects the influence of Hinduism on Thai’s monarchy.

The king later receives members of the royal family, the Privy Council and Cabinet, among other senior officials, who will pay their respects in the Throne Hall. Afterward he will visit the Temple of the Emerald Buddha to announce he is the royal defender of Buddhism. The day’s events end with a ceremony of the Assumption of the Royal Residence, a symbolic palace housewarming.

On Sunday, there will be a 7-kilometre (4.3-mile) royal procession involving 343 men, some of them carrying the king through old Bangkok in an ornately decorated palanquin, allowing Thais to pay homage to their new king.

Monday will see the king greet the public from the balcony of the Grand Palace in the late afternoon and then hold a reception for the diplomatic corps. 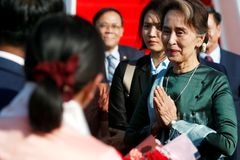 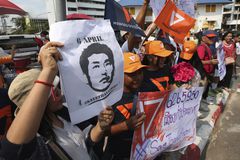 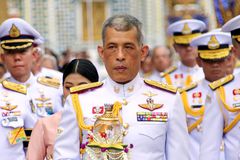