At a news conference Sunday, government minister Luhut B. Pandjaitan blamed the soaring death toll on the fact the health care system has been overwhelmed.

Testing remains a problem throughout Indonesia. A World Health Organization report warned this month that more than half the country’s provinces are reporting a testing rate below the recommended benchmark. “Without appropriate testing, many provinces are unable to isolate confirmed cases on time,” the report said.

Despite the curbs on movement, there are fears that gatherings held last week over Eid al-Adha, one of the most important festivals in the Islamic calendar, could lead to further outbreaks. The holiday may also have reduced the amount of testing being done, with many centres closed, creating a false picture of the actual number of new cases.

At the start of the year, Indonesia appeared to be weathering the COVID-19 storm well, with a relatively low caseload and death toll. But all that changed as summer brought the more infectious Delta variant, which has already raged through India and the United Kingdom.

In June, Jan Gelfand, head of the Indonesian delegation of the International Federation of Red Cross and Red Crescent Societies (IFRC), warned that “every day we are seeing this Delta variant driving Indonesia closer to the edge of a COVID-19 catastrophe,” a dire premonition that has proven correct.

Even as the number of cases rose, the government was slow to implement lockdowns and restrictions on movement. They were finally in place by mid-July, with much of the islands of Java and Bali under strict controls.

Some regions are considering further limits, even though nationwide restrictions were due to lift July 25. Last week, the authorities in Papua, Indonesia’s easternmost province, said they were considering a month-long lockdown in August, with all ports and airports to be closed, if the number of cases did not go down.

There are fears the figures the government is relying on to guide its decision-making may be giving a false impression of the situation.

Tri Yunis Miko Wahyono, an epidemiologist at the University of Indonesia, said officials should not use the number of new infections as a gauge in deciding whether to ease curbs on movement.

“Now, the number of probable cases is still very high among the communities, many are dying, and the government is turning a blind eye,” he said.

Ultimately, vaccination is the best way to reach herd immunity, and Indonesia has struggled to inoculate even 10 per cent of its population, spread out across almost three dozen islands.

Alexander Matheou, the IFRC’s Asia-Pacific director, said in a statement that “millions of people in Asia are living on the cruel and sharp edge of a global vaccine divide between richer countries that have a steady supply and most nations in Asia that are struggling to access sufficient doses to keep their populations safe.”

The IFRC this month called on the developed world to do more to provide vaccines to poorer countries – out of a sense of self-preservation if not empathy.

“The uncontrolled circulation of the virus will significantly increase the risk of emergence of new and more aggressive variants,” said Emanuele Capobianco, the IFRC’s director of health and care. “This is a deadly risk for everyone in the world, including people already vaccinated. The only way to reduce this risk is to maintain public-health measures and increase vaccination coverage everywhere in the world.”

Photography for this story was supported by the National Geographic Society’s Emergency Fund for Journalists. 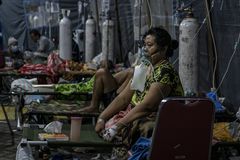 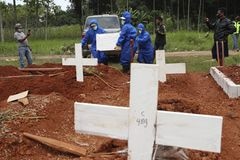 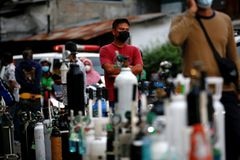