Last fall, during her campaign for U.S. vice-president, Kamala Harris tweeted out a video with a hidden Canadian connection.

“When I was in high school, I had a best friend who I learned was being molested by her father,” she said. “One of the reasons I wanted to be a prosecutor was to protect people like her.”

That friend, unidentified in the video, is a Montreal woman named Wanda Kagan. Her high-school friendship with Ms. Harris was forged over a common identity and a painful secret, and it steered the future politician into a career path that took her from prosecutor, to senator, to the White House.

On Wednesday, that journey culminates with Ms. Harris taking the oath of office as the first female vice-president of the United States. And Ms. Kagan feels like more than just a spectator to history.

“I never realized the impact I had on her,” Ms. Kagan says, “just as she had on me.”

Many people know the story of Ms. Harris’s trajectory to power, and her passage through Canada in the 1970s and early ’80s. At age 12, after her single mother left California for a job as a breast-cancer researcher in Montreal, Ms. Harris attended different schools in her adopted city, including Westmount High.

Less well-known is the high-school friendship with Ms. Kagan, and the insights it offers into Ms. Harris’s values and upbringing.

The two teenagers found much in common at Westmount High, a public school with a diverse student body. Both took part in the school fashion show and performed in a dance troupe called Midnight Magic. They also shared biracial backgrounds and a desire to fit in. Ms. Kagan is the daughter of a Black father and a white mother. Ms. Harris’s father was from Jamaica and her late mother, Shyamala Gopalan Harris, from India.

“We both had to find our way, and that brought us together,” Ms. Kagan says. “We were too dark for the white kids and too light for the Black kids. Luckily, we found a way to fit in with both.”

The two also cemented a deeper connection, rooted in secrecy and pain. Ms. Kagan was being sexually abused at home by her stepfather.

Ms. Kagan didn’t speak about it, but says her friend sensed something was amiss. “I remember her drawing it out of me,” says Ms. Kagan, an administrative assistant at the Jewish General Hospital in Montreal.

Ms. Harris said she spotted a shift in her friend’s demeanour. “I suspected something, because she would come to school and just be sad,” she says in the video. “And there were times when she just didn’t seem to want to go home.”

What happened next offers a glimpse into the moral principles that shaped Ms. Harris, instilled by a mother whom she has described as the greatest source of inspiration in her life. Ms. Harris invited Ms. Kagan into her home.

For several months, Ms. Kagan lived with Ms. Harris, her mother, and her younger sister, Maya. She even shared a room with the future vice-president, listening to the music of Prince and The Jackson 5, and sleeping on a pullout futon in the second-floor duplex on Grosvenor Avenue, in the Snowdon district of Montreal. More significantly, Ms. Kagan became part of a structured and stable home, where Indian meals were shared around the dinner table and discipline and studiousness were the order of the day.

“They made me feel like part of the family,” Ms. Kagan says.

Dr. Gopalan Harris personally intervened to get help for Ms. Kagan, and accompanied her on various appointments. “She made me feel comfortable to open up and trust her, and she helped navigate me through the system,” Ms. Kagan says.

That guidance comes as little surprise to those familiar with Dr. Gopalan Harris, who blazed a trail of her own when she came to Montreal to teach at McGill University and carry out research at the Jewish General’s Lady Davis Institute. “She was a strong and independent woman and part of a small minority of woman scientists at the time,” recalls Dr. Michael Pollak, a breast-cancer specialist who worked with Dr. Gopalan Harris. She also nurtured a loyal following among her lab students. “She insisted on being called Shyamala. No other lab directors at the Lady Davis at the time were known by their first names,” says Dr. Pollak, a McGill University professor and director of the Stroll Cancer Prevention Centre at the Jewish General.

After high school, Kamala Harris left Montreal to attend Howard University in the U.S., and lost touch with her classmate. Then, about 25 years later, Ms. Kagan tuned into The Oprah Winfrey Show and saw her former classmate being introduced as “Superstar Prosecutor Kamala Harris.” It was 2005, and the new San Francisco district attorney already had a record for prosecuting sex crimes. On the show, Ms. Harris spoke with pride about her work creating a child assault unit.

Ms. Kagan reached out to her old friend through her office and, to her surprise, Ms. Harris called back the same day. The two have remained in contact ever since, and Ms. Harris’s campaign staff obtained Ms. Kagan’s permission before making the abuse disclosures public.

This month, Ms. Kagan received a phone call from the White House inviting her to take part in festivities for the Biden-Harris inauguration. Because of security concerns, she was told that a celebration would be held later on, at an undetermined date.

Ultimately, it’s a sign the friendship left a legacy in the lives of both women. For Ms. Kagan, the future vice-president and her family guided her through a turbulent time. Ms. Kagan went to university and began her own family, naming her daughter after Kamala’s sister, Maya.

“They planted the seed of stability and empowerment in me,” she says. On Wednesday, she’ll be watching her former classmate ascend to one of the highest offices in the world. “It’s still all sinking in.” 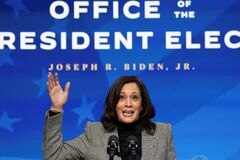 Democrat Kamala Harris sets off for presidential run with a promise to unite the country
January 27, 2019 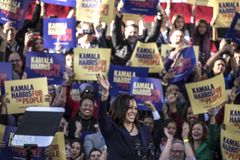 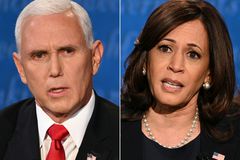