Everybody’s talking about it. How did the world’s most famous street artist manage to shred – or rather half shred – one of his iconic Girl With Balloon paintings moments after it had sold for $1.4-million at auction?

Acoris Andipa, an art dealer specializing in Banksy and based in the Knightsbridge district of London, is among the many people asking that question after Friday’s sensational goings-on at Sotheby’s.

“It was spectacularly staged,” said Andipa. “What isn’t clear is whether Sotheby’s was in on it.”

The identities of the buyer and underbidder, both of whom were bidding anonymously by telephone, remain undisclosed. Sotheby’s said in an e-mail statement Sunday that the successful buyer was “a private client, who was as surprised as we were, and with whom we’re still in discussions.”

The auction house added: “We had no prior knowledge of this event and were not in any way involved.”

The ever-elusive, ever-inventive Banksy has once again made a fool of the art world, and captivated millions. But has the joke itself slightly self-destructed? Banksy’s remotely shredded Girl With Balloon was meant to poke fun at the excesses of the auction market. Yet thanks to the huge amount of publicity generated by this ingenious prank, his prices look set to soar even higher.

“It was a brilliant PR stunt,” said Offer Waterman, a dealer in 20th-century British art who attended the auction but left before the sale of the Banksy. “It’s going to elevate his prices.”

Waterman is among those who think the Banksy sold at Sotheby’s has increased in value post-shredding.“It’s become worth more as a conceptual moment than as a work of art itself,” said Waterman, adding that he believed Sotheby’s had no knowledge of the stunt. “They didn’t know. There was no reason for them to know.”

Yet Andipa, who has sold about 15 other painted versions of Banksy’s Girl With Balloon, said he observed several oddities about the painting’s sale that made him wonder whether Sotheby’s had an inkling. (The dealer said that at least two of his clients had intended to bid on the painting, but he did not know if either became the buyer or underbidder.)

Andipa said that he viewed the painting at the preauction exhibition and pointed out to Sotheby’s staff members what he termed the “disproportionate” thickness of the frame (concealing the shredding device). How did the auction house respond to that observation?

“They didn’t say anything at all,” said Andipa. “Conversations were as usual.”

“The people I spoke to didn’t give any evidence of knowing something,” he added. “If the upper management knew, I can’t speculate.”

Andipa was also perplexed by the fact that this valuable painting, which he had never seen before, was tucked away on a wall near the back entrance of Sotheby’s during the preauction view.

“It was next to the catering,” said Andipa. “Access was challenging.” During the auction itself, the painting was hung next to the Sotheby’s staff members who take telephone bids, a favoured subject for auction-house publicity shots.

In addition, Andipa was surprised – as were many others – by a $1.4-million Banksy being the 67th and last lot of the auction. By that point, many in the audience would have left the salesroom for dinner. “The running order of the sale was odd,” Andipa said.

Back in 2004, a stencilled image of a young girl releasing a red heart-shaped balloon appeared on a wall on London’s South Bank. It has become one of Banksy’s most celebrated and coveted creations, the stencil being repeated in an edition of 150 prints and 25 numbered paintings, as well as an unknown number of unique spray paintings in different sizes with variations, of which Sotheby’s $1.4-million painting was one.

That 40-inch-high example, “acquired directly from the artist by the present owner in 2006,” according to the Sotheby’s catalogue, set a new auction high for a work solely created by Banksy. One of the smaller, 20-inch-high edition paintings of Girl With Balloon sold in March for 344,750 pounds ($480,000) at Bonhams in London, according to the Artnet Price Database. Andipa said that back in 2006 he was selling these smaller edition paintings for 30,000 pounds, or about $55,000 at the time.

There was also something strange about the video Banksy posted Saturday on his Instagram page. Drawing 6.3 million views by Sunday morning, the video purported to show the artist secretly building a shredder into the painting “a few years ago.”

If that were the case, wouldn’t the battery in the shredder have had to be replaced at some point? This, in turn, poses the question: Was Banksy himself the owner who entered this stencilled painting, which may or may not have been made and framed “years ago,” into the sale? Sotheby’s, like all international auction houses, does not reveal the identity of its sellers, unless specifically requested.

And what about the identity of the man in the salesroom who remotely activated the shredding device? Could he have been the elusive “graffiti guerrilla” himself?

In 2008, the British newspaper The Mail on Sunday identified Banksy as Robin Gunningham, a former private schoolboy from the Bristol area of western England. On Saturday, Daily Mail noted the similarity between the person identified as Gunningham 10 years ago and a man taking a cellphone video in the Sotheby’s salesroom Friday. Another man, who was seen activating a remote-control mechanism, was pictured in a post on the private Instagram page of Caroline Lang, chairwoman of Sotheby’s Switzerland. He, too, was identified as Banksy, by Lang.

“Banksy is no stranger to Sotheby’s New Bond Street,” said Alex Branczik, the auction house’s head of contemporary art in Europe, in an e-mail. “He stencilled a ‘gangsta rat’ on the gallery wall during the preview of Damien Hirst’s “Pharmacy” sale 14 years ago, almost to the day.”

Those who witnessed the incident said that afterward, Sotheby’s security staff escorted a noisily protesting man off the premises.

Sotheby’s declined to comment on exchanges between the individual and its security staff, and on whether the company had any plans to press charges.

The prank was “a brilliant comment on the art market,” said Andipa, who added that if he were the buyer, he would leave the painting in semi-shredded condition. “It’s a part of art history.”

‘We just got Banksy-ed’: Balloon girl painting self-destructs after selling for over £1-million
October 7, 2018 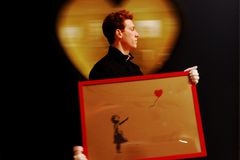