It’s an unenviable job that’s rife with backstabbing and sometimes ends in tears, but 10 candidates have come forward to become Britain’s next prime minister.

The post is being vacated by Theresa May who has been pushed out as Conservative party leader and Prime Minister after less than three years in office. Ms. May’s failing, in the eyes of many Tories, has been her inability to pull the country out of the European Union by the March 29 deadline. The date has been pushed to Oct. 31 but Britain is still no closer to negotiating the terms of its departure with the EU.

The race to succeed Ms. May officially began on Monday – when candidates were required to submit their papers – and the campaign is off to a rambunctious start with candidates attacking each other over past drug use and who is best able to deliver Brexit and save the Conservatives from sagging popularity. The party has been dragged down by the Brexit turmoil and finished fifth in the recent elections to the European parliament. Much of the Conservative support has gone to the new Brexit Party, formed two months ago by long-time Euroskeptic Nigel Farage.

The front-runner is former foreign secretary Boris Johnson, a fierce critic of Ms. May’s Brexit strategy who believes the country can leave the EU without any agreement. Mr. Johnson, 54, upped the ante over the weekend by promising to withhold the £39-billion ($65.5-billion) “divorce bill” Britain has agreed to pay the EU to push for a better deal. “I think our friends and partners need to understand that the money is going to be retained until such time as we have greater clarity about the way forward,” Mr. Johnson told The Sunday Times. “In getting a good deal, money is a great solvent and a great lubricant.”

That stance has raised eyebrows in Brussels and has led some EU officials to suggest it would amount to Britain defaulting on its sovereign debt which could make it harder for the country to raise money in global debt markets. Mr. Johnson has also drawn criticism from other leadership contenders who believe his tough line on Brexit is irresponsible and impossible to deliver. “We need the art of tough negotiation, not the art of empty rhetoric,” said leadership rival Jeremy Hunt, the Foreign Secretary. Mr. Hunt, 52, favours seeking a deal and he’s open to extending the deadline if an agreement was in sight.

"We won’t deliver Brexit with bluff and bluster,” added another leadership candidate Dominic Raab, 45, a former Brexit secretary who has also taken a tough line on Brexit but insisted on Monday that he doesn’t want to leave without an agreement.

Mr. Johnson’s main rival in the race was supposed to be Environment Secretary Michael Gove, 51. The two men led the Vote Leave campaign in the 2016 Brexit referendum but their relationship has deteriorated. Mr. Gove’s campaign got off to a rough start on Monday after he admitted using cocaine several times when he worked as a journalist more than 20 years ago. He has referred to the drug use as a mistake and admitted he was fortunate to have avoided being arrested.

But the issue hasn’t gone away especially since an article he wrote in 1999 surfaced in which he condemned “London’s liberal consensus” for pushing for looser laws on drug use. Critics have also pointed out that when he was education secretary, Mr. Gove ordered teachers who took drugs to resign. Sayeeda Warsi, a former Tory co-chairman, said Mr. Gove had shown “hypocrisy of the highest order” and should quit the race.

Mr. Gove tried to steer away from the controversy at his campaign launch Monday, preferring to focus on his plan to cut taxes and negotiate a Brexit deal. He also took a shot at Mr. Johnson. Referring to the 2016 leadership race when Mr. Johnson abruptly stepped aside, Mr. Gove said: “Mr. Johnson, whatever you do, don’t pull out. I know you have before, and I know you may not believe in your heart that you can do it, but the Conservative Party membership deserve a choice.”

Mr. Johnson is expected to launch his campaign on Tuesday and so far he has kept a lower profile than the other candidates. He has a history of missteps and his advisers appear keen to manage his campaign carefully.

Being the front-runner is no guarantee of success and the leadership rules allow for unpredictable finishes. Only MPs can run and all 313 Tory MPs will begin voting this week to winnow the field down to two candidates. The party’s roughly 120,000 members will then select the winner in a postal vote next month. The new leader will be announced during the week of July 22 and he or she will take over as prime minister from Ms. May. 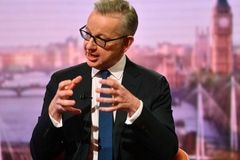 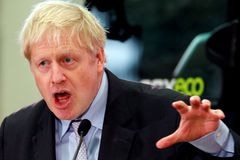 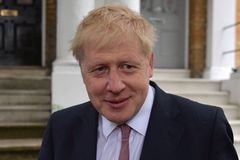