Cardinal George Pell, the Vatican’s former financial comptroller and conservative heavyweight, is back in Rome, five months after his sexual-abuse conviction in Australia was overturned, springing him from prison, where he had spent 13 months, mostly in solitary confinement.

If he’s gloating, it’s not just because he was acquitted on the charges that he always maintained were spurious, but because his nemesis, Cardinal Giovanni Angelo Becciu, had made an inglorious exit from the Vatican on Sept. 24, just six days before he flew back to Rome. The Pope demanded the resignation of Cardinal Becciu, 72, who was in charge of the Vatican’s saint-making office and had been Francis’s chief of staff until mid-2018, amid financial scandals that centre on the Sardinian-born prelate.

The reversal was stunning. Within a week, one disgraced cardinal had returned to the Vatican with his head held high while another was “decapitated,” to use a term beloved by the Italian press, and hung up his red cap in shame. It was certainly an open secret that Cardinal Pell and Cardinal Becciu did not get along with one another when the former was trying to clean up the Vatican’s finances and the latter was making Vatican investments.

The lives of the two cardinals were intertwined and it appears that Cardinal Pell had the last laugh, all the more so since two of Italy’s leading newspapers last weekend reported that Cardinal Becciu was so determined to see Cardinal Pell incarcerated that he secretly shipped €700,000 ($1.1-million) in Vatican funds to Australia to bribe witnesses in the sexual-abuse case. Cardinal Pell, now 79, was accused of molesting choirboys in Melbourne, Australia, in the 1990s.

“Even if this were all in a novel, it would be just unbelievable,” said Father Thomas Reese, senior analyst in Washington at Religion News Service. “The money trail, if there is one, needs to be investigated.”

But the loser wasn’t just Cardinal Becciu; it was also Francis, who had made him a cardinal in mid-2018 in spite of rumours and accusations – none proven – that he was involved in dubious or unwise financial transactions, at least one of which, and possibly more, was stopped by Cardinal Pell when he was trying to clean up the Vatican’s notoriously murky finances.

Even the manner in which Francis turfed Cardinal Becciu didn’t win the Pope any points. Instead it reinforced the view that the workings of the Vatican remain opaque in spite of Francis’s vow, made in 2015, two years after he was elected Pope, that the Roman Curia (the Vatican’s bureaucracy) and its financial matters operate in “absolute transparency.” It reinforced the view that the Pope’s absolute-monarch powers remain intact – the Vatican has never been a democracy.

There was nothing transparent about the ouster of Cardinal Becciu, who technically remains a cardinal but has lost all his powers as one, including the right to vote in the next papal election.

In typical Vatican fashion, the news of Cardinal Becciu’s ouster was slipped into the Holy See Press Office’s daily Bollettino news bulletin as a one-line item. It said that Francis had “accepted the resignation” of Cardinal Becciu “and of the rights connected to the cardinalate.”

Everyone knows that cardinals don’t resign – they’re lifers. When they get pushed out, it’s usually for terrible crimes or allegations. Veteran Vatican watcher Rocco Palmo, author of the influential Whispers in the Loggia blog, noted that only three other cardinals in modern times – Hans Hermann Groer, Keith O’Brien and Theodore McCarrick – have been stripped of their rank or prerogatives as cardinal. In each case, the men faced allegations of sexual abuse.

“That is not the case here,” Mr. Palmo wrote on Sept. 25, the day after Cardinal Becciu was pushed out the door. “In a first, Becciu’s ouster owes itself to financial misconduct, which in itself creates a monster of a precedent for an institution that has seen its share of fiscal scandal at very high levels. … This time, Francis moved on a key Vatican figure in a way not seen in memory.”

The Pope did not say why he insisted on the resignation of Cardinal Becciu, and the Cardinal himself has demanded the right to clear his name – a trial is possible. “We don’t know what happened or what Becciu did, but it must have been pretty serious,” said Robert Mickens, the English-language editor of La Croix International, the French Catholic newspaper. “This was clearly aimed at humiliating Becciu.”

Speaking to the media the day after he was sacked, Cardinal Becciu expressed genuine surprise that he was let go, since he considered himself a friend of the Pope and a faithful lieutenant. “The Pope says he no longer has confidence in me because he has received reports from the magistrates accusing me of acts of embezzlement,” he said, referring to media reports that he had funnelled Vatican funds to family members.

Accusations of financial shenanigans have dogged Cardinal Becciu for years.

Well before he left Rome to face his criminal trial in Australia in 2017, Cardinal Pell, it appears, was suspicious of Cardinal Becciu but was unable to rein him in because of Cardinal Becciu’s close ties to the Pope. Francis evidently backed the wrong man.

Cardinal Becciu was one of the Vatican’s rising stars in the Vatican’s diplomatic service between 1984 and 2011, with stints as papal nuncio (ambassador) in Angola and Cuba. His Cuba contacts played an important role in brokering former U.S. president Barack Obama’s “reset” of American relations with Cuba in 2014, Mr. Palmo said.

His success as a diplomat caught the eye of Pope Benedict XVI, who in 2011 made him sostituto – substitute – in the Secretariat of State, effectively the Pope’s chief of staff. He also charmed Francis, too, who was elected Pope in 2013 and kept Cardinal Becciu in his all-powerful position until 2018, when he was punted to the Congregation for the Causes of Saints, the Vatican’s saint factory. The Cardinal’s new job was clearly a demotion that may have reflected the Pope’s waning confidence in the man. By then, Francis was probably well aware of Cardinal Becciu’s alleged exotic financial forays.

A year ago, the Catholic News Agency reported that, in 2014, Cardinal Becciu (then an archbishop) and another cardinal requested the Vatican Bank grant a €50-million loan to fund a partnership between the Secretariat of State and a religious order that wanted to buy a bankrupt Italian hospital. Cardinal Pell was “vocally opposed” to the loan, the news agency said, since the view was taken that the hospital could never make enough money to repay the loan (Cardinal Becciu did find a way to advance the loan, appealing to another Vatican agency to make it happen).

About the same time, Cardinal Becciu started to clash with Libero Milone, the former chairman of accounting firm Deloitte Italia who was hired by Francis in 2015 as the Vatican’s first auditor-general and worked closely with Cardinal Pell in the financial cleanup effort. Mr. Milone lasted two years; he said he was pushed out by Cardinal Becciu on trumped-up accusations after discovering possibly fraudulent financial activity.

Mr. Milone gave no details. For his part, Cardinal Becciu told the media that Mr. Milone was forced out because “he was spying on the private lives of his superiors and staff, including me.” In 2019, Mr. Milone told the Financial Times that he believes he was ousted after investigating secret bank accounts in Switzerland, some of which were later linked to a London property deal that was authorized by Cardinal Becciu and whose losses may have triggered his ouster last week.

The US$200-million investment – a fortune by Vatican standards – was used to buy a share of a luxury apartment building in London’s posh Chelsea district in stages between 2014 and 2018. In 2019 and into early 2020, the deal was exposed as possibly fraudulent and several police raids and arrests were made in connection to it. Cardinal Pietro Parolin, the Vatican’s second-highest official, after the Pope, said in October of last year that the London property deal “was rather opaque and now we are trying to clear it up.”

Cardinal Becciu has denied any wrongdoing, and also denied media reports that Peter’s Pence, the worldwide collection for the Pope’s charitable causes, were used in the deal. This week, the Financial Times reported that donations to the Vatican were used under Cardinal Becciu’s watch to invest in credit default swaps – highly risky bets on the creditworthiness of a company – linked to the car rental company Hertz in 2015. Francis in 2018 called such swaps a “ticking time bomb,” a suggestion that he was unaware of the investment.

It is not known what, if anything, Cardinal Pell knew about the Chelsea apartment investment. If he did have questions, it didn’t really matter, because by mid-2017, he was out of Cardinal Becciu’s hair and facing sexual-abuse charges in his native Australia. Last weekend, the Italian dailies La Repubblica and Corriere della Sera accused Cardinal Becciu of sending the €700,000 to help secure hostile witness testimony against Cardinal Pell during his trial. Cardinal Pell’s Australian lawyer, Robert Richter, has called for an investigation into the alleged payment.

Cardinal Pell, acquitted of the charges and back in Rome, has not commented on Cardinal Becciu’s ouster. But he must feel vindicated. “It was Pell who wanted a complete financial audit of the Vatican and Becciu stopped that,” said Father Reese at Religion News Service. “Pell wanted to follow the money.” 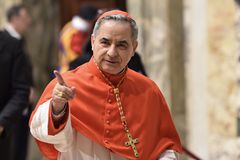 Vatican says bishops should report sex abuse to police even when not legally bound to do so
Subscriber content
July 16, 2020 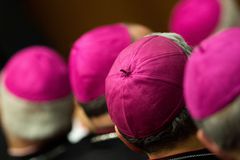 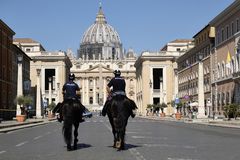