One of the leading figures in a series of anti-government demonstrations in Moscow this summer says the opposition has won an important battle in the fight to restore democracy. But she says protesters will need to keep up street pressure on the Kremlin if they want to effect genuine change.

Lyubov Sobol, a 31-year-old lawyer, became the face of weeks of protest after the government barred her and a dozen other opposition candidates from standing in a Sept. 8 municipal election.

She was a thorn in the side of President Vladimir Putin and his inner circle for years before the demonstrations erupted, using her legal background to expose billion-dollar corruption in government tenders. But, like other Russian opposition figures before her, Ms. Sobol became a target as she grew in prominence. She was detained almost half a dozen times this summer and says she has been harassed while walking her five-year-old to school by men she believes were pro-government thugs.

She told The Globe and Mail the results of Sunday’s city council vote – which saw pro-Kremlin candidates ousted in a surprising number of districts around the city – were a sign that Russian society is finally rising up after two decades of Mr. Putin’s increasingly authoritarian rule.

“People have seen that you can actually show up and cast your vote and win,” Ms. Sobol said in an exclusive interview this week, her voice still hoarse from a summer of shouting in protest. “The party of power is very weak, and that was manifest in this election.”

What Ms. Sobol calls the party of power, a pro-Putin movement known as United Russia, actually won a majority in Sunday’s vote, taking 25 of 45 city council seats. But that was a drop from the 40 seats in the previous council, and the opposition – given the obstacles it faced – sees that as a triumph.

Part of the reason for the breakthrough in Moscow was a strategic voting campaign, which saw opposition leader Alexei Navalny call on his supporters to back whichever candidate had the best chance of defeating United Russia in their district.

It was a tactic that helped elect a group of Communist Party deputies, a result some opposition figures found distasteful because the Communists have more in common with Mr. Putin than the liberal-minded voters who back Mr. Navalny and Ms. Sobol. But Ms. Sobol said the result was a success because it revealed the depth of Russians’ discontent with United Russia, a party Mr. Putin founded in 2001.

Ms. Sobol said the opposition will next target the country’s 2021 parliamentary elections – either by the ballot box, if they’re allowed to participate, or in the streets, if they’re not. Another looming date is 2024, when Mr. Putin is due to step aside after 20 years as either president or prime minister.

“We’re ready for this challenge – Sept. 8 was a strong signal to the authorities, but it wasn’t the final step,” she said. “We’ll keep doing what we’ve been doing. There’s no ideal path, but we will persevere through any legal methods available to us, and street protest is one of those.”

Battling against those who rule Russia has clearly taken a toll on Ms. Sobol, who politely tried, and failed, to stifle yawns and coughs through a 35-minute interview.

Her fatigue was understandable. When Mr. Navalny was jailed for 30 days after an unsanctioned demonstration in July, Ms. Sobol stepped up as the de facto leader of the protests.

She was detained on five separate occasions over the summer. She was fined each time but escaped jail time thanks to a Russian law that spares women with young children the administrative detention (short prison sentences without trial) that is a favoured tool for punishing those who attend anti-government gatherings.

Ms. Sobol also staged a month-long hunger strike this summer that she only ended – after losing 20 pounds from her already thin frame – out of concern for the health of one of her aides who had joined the strike in solidarity.

Her determination caught the attention, and earned the admiration, of many Russians. Denis Volkov, deputy director of the Levada Centre, Russia’s lone independent pollster, told The Globe that Ms. Sobol had emerged over the summer as one of the opposition’s most recognizable faces, both in Moscow – long an opposition stronghold – and beyond, where anti-Putin forces have struggled to make a dent in the President’s popularity. (Pro-Putin candidates won all 16 gubernatorial races Sunday.)

Ms. Sobol is prominent enough now that Vladimir Zhirinovsky, a far-right supporter of the Kremlin, repeatedly referred to her by her nickname “Lyuba” during an anti-opposition tirade in Russia’s parliament this week.

“Who is this Lyuba you speak about all day?” interrupted another deputy. “Sobol! The one they are putting in the place of Navalny!” Mr. Zhirinovsky replied.

A graduate of the prestigious Moscow State University, Ms. Sobol said she began her journey to political activism while working as a volunteer observer at polling stations during local elections early in Mr. Putin’s rule. She said she was enraged by what she witnessed. “I wanted to work against the falsifications I saw happening.”

In 2011, she joined Mr. Navalny’s Anti-Corruption Foundation, which has stunned and mobilized Russians by exposing how Mr. Putin’s inner circle had enriched itself throughout his time in power. (Mr. Navalny’s group is largely responsible for the collapse in public support for United Russia, which he memorably branded the “party of thieves and crooks” – although Mr. Putin’s personal approval ratings remain high.)

Ms. Sobol, just 23 at the time, was one of the first people Mr. Navalny hired onto his team. Mr. Navalny, who is also a lawyer, introduced her to his followers in a blog post: “You crooks should be worried. Soon, Lyuba will come for you.”

Since then, she has used her legal skills to dissect how lucrative state contracts have been awarded, explaining her findings in broadcasts to the million-plus followers of Mr. Navalny’s YouTube channel. She focused much of her work on Yevgeny Prigozhin, a tycoon and Kremlin insider known as “Putin’s chef,” who made much of his estimated billion-dollar fortune through government catering contracts.

It would be hard to make a more dangerous enemy. Companies linked to Mr. Prigozhin have been associated with both Russia’s alleged interference in the 2016 U.S. election and with mercenaries fighting on the side of Bashar al-Assad’s regime in the vicious war in Syria.

Ms. Sobol believes thugs working for Mr. Prigozhin were responsible for a 2016 attack that saw her husband injected with a poison that caused him to faint and go into convulsions. The case was never solved, and Mr. Prigozhin has threatened to sue Ms. Sobol for damaging his reputation with the allegation that he played a role in the assault.

Ms. Sobol says she has also been followed by men who conspicuously film her while she walks her daughter to school.

The Putin era has seen a string of violent attacks on opposition leaders, and Ms. Sobol admits that she is scared of what could happen to her and those around her. The insecurity that comes with being part of the anti-Putin opposition is evident on the door to the Moscow office of the Anti-Corruption Foundation, which bears the scars of having been repeatedly forced open by police.

“I’m in a position where there are only two options: keep fighting or move to another country and change my name,” Ms. Sobol said.

She’s decided to stay and fight on. “I understand that if I leave, it means that they’ve won – and that would be a huge disappointment to the part of society that wants to see democratic change.”

U.S. pulled CIA mole out of Kremlin reportedly over fears that Trump would jeopardize his safety
September 10, 2019 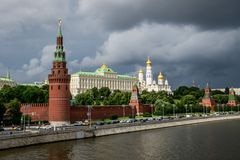