British Prime Minister Boris Johnson has long touted Brexit as an opportunity to broaden the U.K.’s trade horizons, and the government is now pondering a bid to join the United States-Mexico-Canada Agreement.

Mr. Johnson has been eager to sign trade deals ever since the U.K. left the European Union in January, 2020. In the past year the British government has signed “continuity agreements,” which effectively incorporate provisions in EU trade agreements, with dozens of countries, including Canada and Mexico.

But Mr. Johnson’s main ambition has been to reach a bilateral deal with the U.S., something that has eluded the EU. Those efforts appeared to hit a roadblock Tuesday when Mr. Johnson met U.S. President Joe Biden at the White House. Mr. Biden seemed to pour cold water on trade talks when he told reporters before the meeting; “We’re going to talk about trade a little bit today and we’re going to have to work that through.”

After the meeting, British officials confirmed that reaching an agreement looked unlikely and said applying to join the USMCA – commonly known as the new NAFTA – was under consideration. They argued that joining the North American pact, which came into force last year, would broaden transatlantic trade ties and give the U.K. better access to the U.S. market.

Another option would be to negotiate a series of smaller U.S.-U.K. agreements on specific issues, they said. “There are a variety of different ways to do this,” a senior government figure told reporters accompanying Mr. Johnson in Washington. “The question is whether the U.S. administration is ready. The ball is in the U.S.’s court. It takes two to tango.”

On Wednesday, Environment Secretary George Eustice told Sky News that Britain still preferred a bilateral deal with the U.S. but added: “We don’t rule anything out, but obviously with any trade deal it’s the detail that counts.”

A senior Canadian government official said Wednesday that there were no conversations taking place within the government regarding the U.K.’s possible entry into the USMCA. The official is not being identified by The Globe and Mail because they were not authorized to speak about internal deliberations publicly. The same official said the USMCA is a series of very specific undertakings involving specific industrial sectors in North America – not something a fourth country can easily join.

Several trade experts also called the idea of Britain joining the USMCA farfetched, pointing out that the agreement has no provision to add new countries.

“I think on balance, 24 hours later, the feeling is this wasn’t really a seriously worked through thing,” said David Henig, the director of U.K. trade policy at the London-based European Centre for International Political Economy. Mr. Henig added that the USMCA runs contrary to U.K. government policy in many areas, including intellectual property, automotive rules of origin and agricultural trade. “It’s really not written for us to join,” he said. “I don’t think it’s written for any outsider. I don’t think that’s what it’s designed for.”

Jason Langrish, executive director of the Canada Europe Roundtable for Business, said he doubted Canada, Mexico or the U.S. would be keen to welcome the U.K. “I don’t see any of the three partners wanting to reopen this thing, after all it’s been through over the past five years, to accommodate the U.K.,” he said. “And I’m not sure how much value there would be in this deal for the U.K. even if it was a possibility. I give Johnson points for thinking on his feet, but the idea itself two thumbs down.”

On Wednesday Mr. Johnson said his government remained focused on reaching a deal with the U.S. “There is every prospect of a free-trade deal with the United States,” he told reporters in Washington. “The Biden administration is not doing free-trade deals around the world right now, but I’ve got absolutely every confidence that a great deal is there to be done.”

Britain isn’t stopping at the USMCA. The government has also submitted a formal application to join the Comprehensive and Progressive Agreement for Trans-Pacific Partnership, a free-trade pact between 11 countries, including Canada, around the Pacific Rim.

With files from Steven Chase in Ottawa 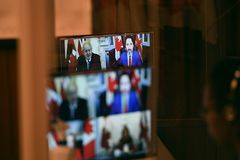 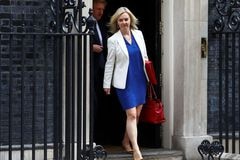