Thousands of Afghans protested against the Taliban in the southern city of Kandahar on Tuesday, according to a former government official and local television footage, after residents were asked to vacate a residential army colony.

Protesters gathered in front of the governor’s house in Kandahar after around 3,000 families were asked to leave the colony, according to the former government official who witnessed the crowds.

Footage from local media showed crowds of people blocking a road in the city.

The affected area is predominantly occupied by the families of retired army generals and other members of the Afghan security forces.

The families, some of whom had lived in the district for almost 30 years, had been given three days to vacate, the official, who had spoken to some of those affected, said.

Taliban spokesmen did not immediately respond to a request for comment on the evictions.

Sporadic protests against the Taliban, who swept to power in Afghanistan with the capture of Kabul almost a month ago, have ended in occasionally deadly clashes, although there were no confirmed reports of violence on Tuesday.

Taliban leaders have vowed to investigate any instances of abuse, but have ordered demonstrators to seek permission before holding protests.

The United Nations said on Friday the Taliban’s response to peaceful protests was becoming increasingly violent.

The Taliban have already broken their promises to safeguard women and protect human rights, and the international community must hold them to account, the outgoing government’s ambassador to the United Nations in Geneva said on Tuesday.

“The Taliban have vowed to respect women’s rights but women’s rights are disappearing from the landscape,” Nasir Ahmad Andisha, who remains accredited at U.N. bodies despite the collapse of the government he represents, told the Human Rights Council.

He accused the Taliban of carrying out “widespread atrocities” in the Panjshir valley, the last major part of the country to hold out against them, and said they were conducting targeted killings and extrajudicial executions, including of young boys.

The Taliban’s appointment of a new interim government “undermines Afghanistan’s national unity political and social diversity”, he said. The cabinet is made up entirely of men and overwhelmingly members of the Pashtun ethnic group that forms the Taliban’s main base of support but accounts for less than half of Afghanistan’s population.

“At this crucial moment the world cannot remain silent,” he said. “The people of Afghanistan need action from the international community more than ever.”

The Taliban have denied carrying out abuses in Panjshir. They say they are supporting women’s rights within a Muslim context, and that the new interim government will consult the population on an inclusive future permanent system.

Andisha called for the Council to create a fact-finding mission to monitor Taliban actions – an initiative that is backed by Western countries but which diplomats say is opposed by some Asian states.

On Monday, U.N. High Commissioner for Human Rights Michelle Bachelet rebuked the Taliban for contradicting public promises on rights, including by ordering women to stay at home, blocking teenage girls from school and holding searches for former foes.

Three-year-old Afghan boy reunited with his father in Toronto after two weeks alone in Qatar
September 14, 2021 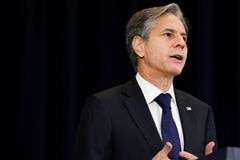