Waving Iranian flags, chanting “Death to America” and burning U.S. and Israeli flags, hundreds of thousands of people poured out onto the streets across Iran on Monday, marking the date that’s considered victory day in the country’s 1979 Islamic Revolution.

On Feb. 11 that year, Iran’s military stood down after days of street battles, allowing the revolutionaries to sweep across the country while the government of U.S.-backed Shah Mohammad Reza Pahlavi resigned and the Islamic Republic was born.

In Tehran, crowds streamed in the rain from a dozen of the capital’s far-flung neighbourhoods to mass in central Tehran Azadi, or Freedom Square, on Monday, waving Iranian flags and chanting “Death to America” – a chant that has been standard fare at anti-U.S. rallies across Iran.

Chants of “Death to Israel” and “Death to Britain” followed, and demonstrators burned U.S. and Israeli flags. Iranian state TV, which said millions participated in the celebrations, ran archive footage of the days of the uprising and played revolutionary songs. It later broadcast footage showing crowds across this country of 80 million.

The 6-mile-long downtown Enghelab, or Revolution Street, in Tehran was decorated with huge balloons as loudspeakers blared out revolutionary and nationalist songs to encourage people to join the rallies.

Every year, the anniversary festivities start on Feb. 1 – the day Khomeini returned home from France after 14 years in exile to become the supreme leader as Shiite clerics took power – and continue for 10 days, climaxing on Feb. 11.

This year’s anniversary comes as tensions rise with the United States and Iran grapples with the aftermath of President Donald Trump’s pullout last May from the 2015 nuclear deal between Iran and world powers and tough U.S. economic sanctions, reimposed in November.

Speaking from a podium in central Tehran, Iranian President Hassan Rouhani addressed the crowds for nearly 45 minutes, lashing out at Iran’s enemies – America and Israel – and claiming their efforts to “bring down” Iranians through sanctions will not succeed.

“The presence of people in this celebration means that plots by the enemies … have been defused,” Rouhani said. “They will not achieve their ill-omened aims.”

In the backdrop to Monday’s marches, the military displayed Iranian-made missiles, which authorities showcase every year during anniversary celebrations and which now have a range of up to 2,000 kilometres (1,250 miles) and are able to Israel and U.S. military bases in the region.

Over the past decade, Iran has frequently test-fired and displayed missiles, sent several short-lived satellites into orbit and in 2013 launched a monkey into space.

Washington alleges Iran’s launches defy a UN Security Council resolution calling on Iran to undertake no activity related to ballistic missiles capable of delivering nuclear weapons. Tehran denies the charge, insisting its satellite launches and rocket tests do not have a military component.

“We do not and we will not ask permission for producing any type of missiles from anybody,” Rouhani said in his speech Monday, though he stressed that Iran would “continue constructive engagement” with the international community.

Rouhani also promised the crowds that Iran would overcome the economic hardship amid the country’s spiralling economy and the newly imposed U.S. sanctions.

Elsewhere, the head of the elite Quds Force of Iran’s powerful Revolutionary Guard, Gen. Qassem Soleimani, attended the rally in the southern city of Kerman.

In Tehran, 27-year-old medical student Hossein Hosseinpour, walked with his wife and their 18-month son Amir Ali. He said he wanted to teach his son to support the revolution. “I see a bright future for him and our nation,” Hosseinpour said.

Mahmoud Hemmati, 35, was pushing his 68-year-old mother, Parivash Fakheri, in a wheelchair. “My mother, despite her illness, asked me to bring her out,” he said.

Fakheri, who was one of the revolutionaries on the streets of Tehran in 1979, said she would defend the revolution all over again.

“I know there are many economic problems today, but that is something different from our revolution,” she said. “It has been moving forward over the past 40 years and making Iran stronger.”

Last week, Supreme Leader Ayatollah Ali Khamenei defended the “Death to America” chants, saying they are aimed at America’s leaders such as Trump and not its people.

The Iranian people “will not stop saying ‘Death to America’ as long as the U.S. acts malicious” toward Iran, Khamenei said, referring to Trump’s State of the Union address in which the American president, among other things, said: “We will not avert our eyes from a regime that chants death to America.”

Iranian state TV anchor Mehdi Khosravi chirped how he expects John Bolton, U.S. national security adviser, to be very angry on Monday since he had once predicted that Iranians will not see the 40th anniversary of their revolution.

Last year, Bolton told a meeting of Iranian exiles that “before 2019, we here … will celebrate in Iran.” 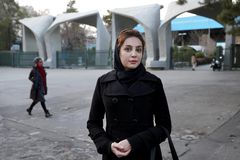 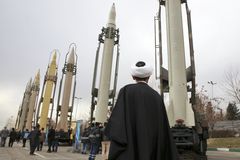 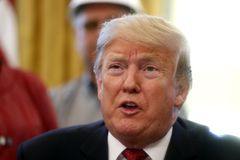