Thousands of Guatemalans took to the streets in protest on Thursday, lighting fires and blocking roads across the Central American country, to demand the resignation of President Alejandro Giammattei after the firing of a well-known anti-corruption prosecutor.

Sandoval, who fled Guatemala last weekend, said he was fired after the attorney general prevented him from trying to investigate corruption cases with links to Giammattei. The president has denied being involved in corruption.

In an interview with a local television channel last weekend, Porras said she always acted with transparency. “[Sandoval] exercised selective justice since he tried to prosecute people of opposite ideology,” she said.

In Guatemala City, a crowd of thousands of people marched from the presidential palace to the attorney general’s office holding signs that said “Giammattei, Resign.”

“Today we are in front of the presidential palace but a president does not live here: a traitor does,” said Samuel Pérez, an opposition lawmaker who joined protesters.

By 5 p.m. local time (2100 GMT) the protester numbers began to dwindle, while the remaining demonstrators were peacefully camped out in front of the National Palace of Culture, an imposing museum building that also houses some of the offices of the president.

The demonstrations in Guatemala City were part of a national strike called by indigenous leaders, social groups and student organizations to demand the resignations of Giammattei and Porras.

The latest protests highlight growing internal frustrations in Guatemala over corruption and the dismantling of judicial independence. In 2015, waves of such anti-corruption demonstrations brought about the downfall of then-president Otto Perez Molina.

On Thursday, across the impoverished nation of 17 million people, protesters blocked traffic at major intersections and marched with banners calling for the departure of the president, elected two years ago.

“We are here to tell the president that we do not recognize him as president because he no longer represents the interests of our country,” said Martín Toc, an indigenous leader from Totonicapán, in western Guatemala.

Since he fled, Sandoval has told various media outlets that the president was linked to an incident last year, where 122 million quetzals, equivalent to over $15 million, were found stuffed in suitcases in the house of a former infrastructure minister.

Sandoval also said he was investigating how unidentified businessmen from Russia had allegedly delivered bags of cash to the president in a meeting at his house, an event, he said, which was in some way linked to the Sputnik V coronavirus vaccine.

Giammattei this week strongly denied all the claims, and added that the allegations involving the businessmen were “false comments bordering on slander and defamation.”

The United States, which strongly condemned Sandoval’s dismissal, said on Tuesday it was pausing some co-operation with Guatemala’s attorney general, as it tries to apply pressure on Central American governments to end impunity.

U.S. President Joe Biden’s administration has made the fight against corruption a central plank of its strategy towards the region as it aims to address the root causes of illegal migration to the United States, which has increased this year.

In a statement shared on Twitter, Giammettei said on Thursday that the U.S. decision to suspend support to the attorney general was “counterproductive” in the fight against organized crime and corruption.

“We made very clear in our response that we had lost confidence in the attorney general,” he said.

While police guarding government buildings faced off with protesters in the capital, no incidents of violence were reported.

Thursday’s demonstrations came after hundreds of Guatemalans protested outside the presidential palace on Saturday after Sandoval’s firing.

Giammattei’s government also faced protests last November when a group of demonstrators set fire to the Congress building over cuts to education and health in the 2021 budget. Days later, Congress retracted the budget. 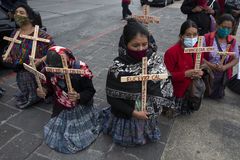