Thousands of pro-democracy demonstrators rallied in central Bangkok on Wednesday, a day after a chaotic protest outside Parliament was marred by violence that left 55 people injured, including as many as six with gunshot wounds.

Tuesday’s protest had been held to encourage lawmakers to approve a motion that would lead to substantive constitutional change, including measures to limit the power of the monarchy.

The protesters gathered peacefully Wednesday at a major intersection and then moved as night fell outside the nearby national police headquarters, its gates protected by razor wire and riot police.

They said they wanted to express anger at what they regarded as disproportionate use of force the previous day by police who employed chemical-laced water cannons and tear gas against them.

Much of the water shot at them was dyed blue, and in an act of repayment, Wednesday’s protesters tossed blue and yellow paint on the “Royal Thai Police” sign outside the police headquarters as the crowd cheered. The sign was also adorned with graffiti.

Before the demonstration broke up, protest leaders announced a large protest on Nov. 25 at the offices of the Crown Property Bureau, which manages the vast holdings of Thailand’s royal palace. Its holdings, controlled by King Maha Vajiralongkorn, are estimated to be worth more than $40-billion.

Tuesday’s confrontations outside Parliament were the worst violence during months of actions by the student-led protest movement, which has staged increasingly determined rallies of thousands of people around the country.

Sucharn Thoumrungroje, a 20-year-old engineering student, said he decided to attend Wednesday’s rally after learning of what happened at Parliament the day before.

“I feel that it is unacceptable that the state used force against its people,” he said. “I understand that there are risks in taking part in rallies but I will come as much as I can to show that we are not afraid and stand firm on our demands.”

The two-day joint session of the House and Senate debated seven motions for amending the constitution. Voting took place Wednesday, and the motion backed by the protest movement failed.

That motion, submitted by iLaw, the Internet Law Reform Dialogue, would have allowed all aspects of the constitution to be changed, including articles dealing with the monarchy.

The monarchy is a virtually untouchable institution that the royalist establishment and many ordinary citizens consider to be the heart and soul of the nation, and the motion had not been expected to pass.

Two motions to set up a constitution drafting committee did pass. One, initiated by the governing coalition, calls for the committee to be composed of a mix of appointed and elected members, while the other, backed by the parliamentary opposition, says all members should be elected. The other motions, mostly dealing with details of proposed changes, all failed.

The motions that passed will have to go through second and third votes after at least a month.

Protest leaders made clear before Parliament met that they would not be satisfied unless the motion submitted by iLaw passed.

According to Erawan emergency services, 55 people at Tuesday’s protest were sent to hospitals, the largest number suffering from the effects of tear gas. It said four remained hospitalized Wednesday, including three of the six people it said had suffered gunshot wounds. The circumstances of the shootings were not announced.

Some of the injuries occurred during a brawl between the pro-democracy protesters and stone-throwing royalists who oppose constitutional change.

Police at a news conference Wednesday spoke of only two people with gunshot wounds, and said they were not responsible.

“We are in the process of an investigation into who might be behind the shootings,” said police deputy spokesperson Col. Kissana Phathanacharoen. “No rubber or live bullets were used by the police for yesterday’s police operation, that is confirmed.”

Most of Tuesday’s violence occurred when police acted against the student-led demonstrators as they tried to push their way past razor wire and other barriers to enter the grounds of the legislature on the outskirts of Bangkok.

After about six hours of chaos, a protest leader announced the end of the protest, saying the demonstrators had captured enough ground to declare they had achieved their goal of surrounding Parliament.

The parliamentary session was an effort by the government of Prime Minister Prayuth Chan-ocha to take the initiative away from the pro-democracy movement, which in addition to seeking constitutional change wants Prayuth and his government to step down, and to reform Thailand’s monarchy, which it feels is too powerful and lacking in accountability. 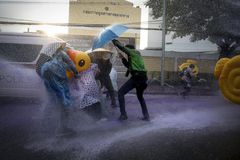 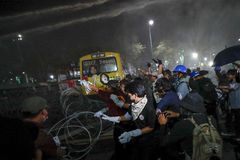