Wide stretches of Northern California plunged into darkness over the weekend as the state began the largest planned blackouts in its history in hopes of stemming the spread of wildfires that have forced thousands from their homes.

As the Kincade Fire continued to burn out of control through California wine country on Sunday, officials with the state’s largest utility, Pacific Gas and Electric Co. (PG&E), said they were expanding intentional power outages to almost a million homes and businesses, affecting roughly three million people.

The beleaguered investor-owned utility has faced a fierce backlash over the blackouts – the second in less than a month.

PG&E has defended the measure as necessary to ensure its electrical lines do not start new fires as it grapples with changing weather patterns driven by climate change.

“This is a problem that has to be solved by many people to come up with new answers for a new time and a new reality," PG&E’s chief executive for utility operations, Andy Vesey, told reporters over the weekend.

Malfunctioning PG&E equipment has been the source of more than a dozen of the state’s most devastating fires in recent years. The utility filed for bankruptcy protection in January under the weight of billions of dollars in liabilities for wildfires that killed more than 100 people in 2017 and 2018.

Last week, PG&E acknowledged that, despite the pre-emptive blackouts, it had detected problems with its equipment in an area close to where the Kincade Fire began.

Company executives have blamed the rising number of electrical malfunctions on years of drought that killed more than 100 million trees across California. They point to the hot, dry winds that regularly blow in the fall, sending branches from dead trees into power lines, quickly setting fire to the dense, dry vegetation nearby.

Mr. Vesey acknowledged the growing frustration with the blackouts. He said PG&E is working to upgrade its power grid to protect against the increasing fire risk. The company has launched programs to better manage vegetation around electrical equipment and is developing technology that could allow outages to be smaller and more targeted.

Still, he warned that rolling blackouts are likely to become regular events for years to come. “Right now, it’s become the main lever to pull, because we have not got to the place where we make this transition from the old world to the new.”

California Governor Gavin Newsom lashed out at the utility for “decades of greed and mismanagement” that he said had made PG&E unprepared to manage the increasing wildfire risks. “A society as industrious and entrepreneurial and innovative as ours should not have to face a choice between public safety and public blackouts,” he said.

The utility, with roughly 16 million customers in California, rejected Mr. Newsom’s request that it compensate residents and small businesses for the power outages. The Governor has also called for PG&E to be broken up and has encouraged local governments to bid on parts of the business.

The fires complicate PG&E’s plans to emerge from bankruptcy protection by next June. Earlier this month, a bankruptcy court judge denied the San Francisco-based company the right to pursue its own restructuring plan exclusively. The ruling opened the door to a competing plan from a group of bondholders and wildfire victims that could potentially make PG&E responsible for almost US$25-billion in wildfire liabilities.

The Kincade Fire expanded to more than 50,000 acres Sunday, fuelled by winds gusting as high as 144 kilometres an hour. The winds spread flames south and west into more populated areas north of San Francisco. More than 180,000 people have been forced to flee their homes since Wednesday.

Fire officials ordered the evacuation of much of Sonoma County, including parts of Santa Rosa, a city devastated by 2017 fires that killed 44 people. The town of Paradise, Calif., where a 2018 blaze killed at least 85 and destroyed most of the homes, was also set to be without power.

By midday Sunday, firefighters had expanded the evacuations into Calistoga, a small city at the centre of Napa’s wine region. The blaze has so far destroyed 79 buildings, including two wineries.

Firefighters had managed to contain the path of the flames early Sunday. But they warned that the strong winds were likely to continue into Wednesday, sending embers flying as far as two kilometres away. “We are not out of the woods,” Sonoma County supervisor David Rabbitt told a news conference.

PG&E said its blackouts would continue to expand through at least Monday and that power may not be fully restored until the middle of the week.

Utilities in Southern California also shut down power to some customers in the Los Angeles and San Diego areas on Sunday to stem to spread of several smaller fires burning across the state. 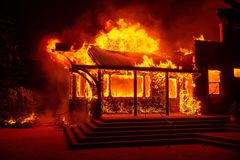 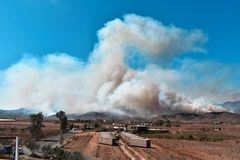 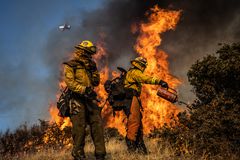