Top diplomats from Russia, Ukraine, France and Germany discussed ways to advance the peace process for eastern Ukraine in Thursday’s call, but failed to achieve any tangible progress.

The call follows a December summit in Paris where the leaders of the four nations agreed to make additional steps toward ending the fighting between Ukrainian forces and Russia-backed rebels. The six-year conflict that erupted after Russia’s annexation of Ukraine’s Crimea has killed more than 14,000 people.

Ukrainian Foreign Minister Dmytro Kuleba said at a briefing after the call that the four ministers agreed that negotiators from Russia, Ukraine and the rebels should quickly discuss specifics of a new ceasefire. Numerous previous attempts to establish a lasting truce have failed amid mutual accusations.

Kuleba added that he called for speeding up efforts to ensure the release of remaining prisoners.

Speaking to reporters after the call, Russian Foreign Minister Sergey Lavrov also voiced hope for more prisoner exchanges, but accused Ukraine of dragging its feet on selecting new areas for troop withdrawal from the line of contact.

Lavrov also noted that the Ukrainian authorities have continued to shun direct dialogue with the rebels, stymieing peace efforts. He emphasized that such negotiations are essential for implementing earlier agreements that envisaged a broad autonomy for the rebel regions.

Kuleba rejected Lavrov’s arguments, insisting that Ukraine will not talk to the “illegal formations.”

Ukrainian President Volodymyr Zelenskiy, who was elected a year ago, has made settling the conflict in eastern Ukraine his top priority. Ukraine and the rebels have exchanged prisoners and pulled back their troops from several sections of the front line as part of confidence-building measures, but sporadic clashes have continued and efforts to negotiate a political settlement have stalled.

During their talks in December, the leaders of Russia, Ukraine, France and Germany scheduled their next meeting for April in Berlin, but the coronavirus pandemic scuttled those plans.

Asked about the difficulties of holding talks by video conference, German Foreign Minister Heiko Maas said that “the biggest problem probably lies in the fact that everyone sits in a different room and has control over their own microphone.” While Thursday’s call resulted in a discussion and a compromise “in many areas … I still clearly prefer physical meetings,” he observed.

The four-way talks focused on the implementation of a 2015 peace agreement for eastern Ukraine that was signed in Minsk and brokered by France and Germany.

Maas said that many of the elements agreed in Minsk and Paris have yet to be implemented. “These compromises, which are the result of long and hard negotiations, mustn’t be destroyed, including through inaction,” the minister added.

He said that the ministers agreed that representatives of Russia, Ukraine and the rebels in the so-called Contact group should focus on providing more humanitarian crossings across the line of contact and taking other steps to help the residents of the region ravaged by the six-year conflict.

French Foreign Minister Jean-Yves Le Drian said in a statement that participants agreed to call for a ceasefire.

Le Drian and his German counterpart insisted that humanitarian organizations’ access must be eased to help the local population and urged for rapid progress of de-mining efforts in areas most frequented by civilians, the statement said.

The four ministers agreed to have another such meeting in a month to review progress, rather than aim for a leaders summit, Maas said. 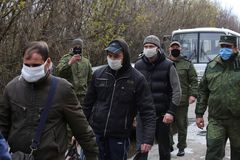 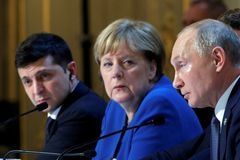 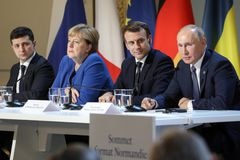