Meanwhile, revenues from oil exports were slashed by nearly half owing to plummeting oil prices in March, according to figures released Wednesday by the Oil Ministry, pushing Iraq into deeper economic uncertainty amid political dysfunction and the coronavirus pandemic.

Esmail Ghaani, head of Iran’s expeditionary Quds Force, arrived in Baghdad late Monday, Iraqi officials said, in his first public visit to Iraq since succeeding slain Iranian general Qassim Soleimani. His arrival at Baghdad airport came amid a curfew to stem the spread of the coronavirus that has halted inbound and outbound flights.

The four Iraqi officials spoke on condition of anonymity in line with regulations.

Gen. Soleimani, along with Iraqi militia leader Abu Mahdi al-Muhandis, was killed on Jan. 3 in a Washington-directed air strike outside Baghdad airport. The attack led to deteriorating U.S.-Iraq relations and prompted Iraqi lawmakers to call for the withdrawal of U.S. troops in a non-binding resolution.

After arriving, Gen. Ghaani left the airport under tight security in a three-vehicle convoy.

Known for his ability to make even the staunchest Iraqi rivals see eye-to-eye, Gen. Soleimani had made frequent trips to the Iraqi capital to forge unity during times of political paralysis.

Gen. Ghaani’s visit coincides with a burgeoning crisis in Iraq as prime minister-designate Adnan al-Zurfi faces resistance from some powerful political elites. Meanwhile, there is deepening fragmentation across the political spectrum. Selected on March 16, Mr. al-Zurfi has 30 days to present a Cabinet lineup.

One of the Iraqi officials who spoke to the AP said Ghaani suggested in the meetings that Iran and the Revolutionary Guard do not want al-Zurfi to be the next prime minister.

Amid the ongoing leadership void, an economic crisis is also brewing.

The Oil Ministry said Iraq had earned $2.9-billion in oil revenues in the month of March, down by nearly half compared to February. Oil sold at an average price of $28 per barrel, according to spokesperson Assem Jihad. In February, by contrast, Iraq earned $5.05-billion based on an average price of $51 per barrel.

Iraq relies on oil revenues to fund over 90 per cent of state spending. The 2020 budget projected an oil price of $56 per barrel to fund expenditures.

Experts have warned that if the slump in oil revenues is prolonged, Iraq will be unable to pay public sector salaries, a step that will likely lead to more unrest.

The government has been taking steps to conserve dollar reserves and cut back on spending.

This month, the oil ministry requested that international oil companies reduce expenditures by 30 per cent while keeping production rates the same, according to two industry officials.

One of the officials said a lot of tenders and projects will be halted and planned production increases will be delayed. The officials spoke on condition of anonymity to not derail ongoing talks with the government.

Many officials considered Ghaani’s visit to be a test of his ability to establish consensus among rival parties like his predecessor had. Given his poor command of Arabic and lack of personal relationships with key figures, some were in doubt.

“This is his first test to see if he can succeed in uniting the Shiite position, as Soleimani was doing,” said a senior Shiite political official, speaking on condition of anonymity to comment freely about the visit, which has not been publicly announced.

“Iran is still powerful and (Ghaani) will have to rely on threats to try and find some way to bring back the massive fragmentation that is Iraqi elite politics today,” said Renad Mansour, senior research fellow at Chatham House in London. “Carrot and stick rather than managing networks.”

“There are too many people who feel entitled to a piece of the pie,” said Mansour. “The competition seems heightened.”

The Fatah bloc in parliament, which came in second after Sairoon in the May 2018 election, vehemently opposes al-Zurfi on the grounds that his selection was made unilaterally by the president and without political agreement. Headed by Hadi al-Ameri, Fatah is composed of parties with affiliated militias under the Popular Mobilization Forces, some of which are Iran-backed. The Sairoon bloc, led by influential Shiite cleric Muqtada al-Sadr, initially supported al-Zurfi’s candidacy. 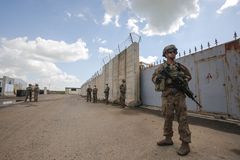 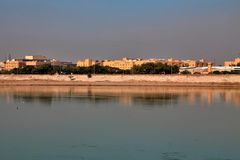