Prime Minister Justin Trudeau is concerned by new trade controls on COVID-19 vaccines, but said his government will ensure that reported restrictions on exports from India and the European Union won’t affect Canada’s vaccine supply.

Without its own domestic production, Canada has little control over its vaccine supplies. India and Europe are the two main sources of Canada’s current COVID-19 shots. On Wednesday, the BBC reported the Indian government is temporarily banning the export of shots made by the Serum Institute of India, or SII. The ban is expected to stay in place until the end of April.

India last exported vaccines a week ago, according to its Foreign Ministry’s website, and a surge in COVID-19 cases there is putting added pressure on the country’s domestic vaccine rollout. Neither the government nor the SII have commented on media reports about the delays.

Canada has already received 500,000 doses of the institute’s vaccine, a version of the Oxford-AstraZeneca shot and sold under the name Covishield. Another 1.5 million shots are supposed to be delivered in April and May.

“At this point, we have no indications that the two million doses we will be receiving from the Serum Institute over the coming two months will in any way be affected. And we will continue to ensure that that be the case,” Mr. Trudeau told the House of Commons on Wednesday.

A senior source with knowledge of the internal deliberations told The Globe and Mail it’s likely deliveries from the institute will be delayed by at least a month. However, they said because Canada’s contract does not stipulate an exact delivery schedule, the SII would not be in breach of its contract as long as all the shots are delivered by mid-May.

The Globe is not disclosing the person’s name as they were not permitted to publicly discuss the matter. Canada’s contracts with other manufacturers, Pfizer-BioNTech and Moderna, similarly did not put the companies in breach of contract if they missed interim delivery dates, as long as they met their quarterly goals.

India’s High Commissioner to Canada, Ajay Bisaria, told The Globe his office is still seeking clarity from the Indian government on whether export rules have changed. But he said challenges accessing raw materials are contributing to production delays at the SII. So far, he said, Canada’s contract with the company remains unchanged.

“There are production issues that SII is facing, some technical issues, but we are waiting for clarity on whether they would impact any of the delivery schedules,” Mr. Bisaria said.

Procurement Minister Anita Anand told a House of Commons committee on Wednesday evening that Mr. Bisaria told her “the contractual commitments that the Serum Institute have made will be observed.”

The shots from the SII are being distributed in Canada through Verity Pharmaceuticals. The Mississauga company did not provide a comment to The Globe.

On Wednesday, the European Union released proposed regulations that would limit exports to countries that are withholding their own domestically made vaccines from export.

The preliminary plan, unveiled in Brussels, seems most likely to affect countries with their own vaccine production, notably Britain, where the AstraZeneca vaccine is made at two plants. The European Commission, the EU’s executive arm, contends Britain has imported almost 11 million doses from the EU but has not sent any to EU countries.

“We have to ensure timely and sufficient deliveries to EU citizens,” European Commission president Ursula von der Leyen said in a statement. “The EU is the only major [OECD] producer that continues to export vaccines at large scale to dozens of countries, but open roads should run in both directions.”

“We will ensure that Canadians continue to receive the vaccines that we need,” Mr. Trudeau told members of Parliament.

At a subsequent House of Commons committee meeting, Ms. Anand said she only learned about the proposed new EU restrictions on Tuesday night, but that they would not affect Canada. Canada is receiving vaccines from Moderna and Pfizer that are made in Europe, but its supply of the AstraZeneca vaccine will be made in the United States.

“Our contracts are with Pfizer and Moderna, those are suppliers that are not targeted by the EU restriction,” Ms. Anand said.

At the same time, though, she declined to give Conservative MP Kelly McCauley a guarantee when he asked her to confirm there won’t be a “single drop” in shipments from Europe.

The proposed restrictions will be discussed Thursday and Friday by EU leaders in a virtual summit, where German Chancellor Angela Merkel is expected to call for a de-escalation of the EU-Britain vaccine dispute. “You have to be very careful about imposing blanket export bans and you have to look very carefully at supply chains,” she said at a news conference Tuesday.

The draft EU rules threaten to trigger global supply disruptions and would hit countries that restrict their “own exports of vaccines or their raw materials, either by law or other means.” They propose EU countries should only approve exports that “do not otherwise pose a threat to the security of supply” of vaccines within the EU. But they would also consider “conditions prevailing in the destination country,” such as the “epidemiological situation, its vaccination rate and its access to vaccines.”

AstraZeneca was supposed to deliver 120 million doses to the EU by the end of March, but the company has said it will only be able to supply 30 million because of production problems at its European plants. EU officials want the company to redirect doses from its two British plants, which have not faced the same production issues. The company and the British government have argued the British production is part of a separate contract, but EU officials say AstraZeneca’s British facilities are obliged to supply vaccines to the bloc.

The AstraZeneca vaccine has been hit with a series of problems in recent weeks, including questions about its efficacy in older people and concerns about possible links to blood clots. U.S. health officials have also raised questions about interim efficacy data the company announced this week from clinical trials in the U.S.

Several regulators, including the European Medicines Agency and Health Canada, have insisted the benefits of the vaccine outweigh any risks. But the concerns have damaged public confidence in the vaccine. A recent poll by YouGov found a majority of people in Germany, France, Spain and Italy no longer believe it is safe. 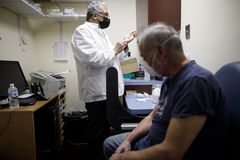 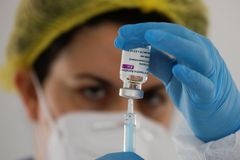 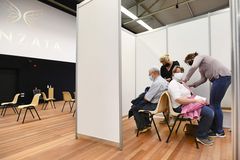 Follow Eric Reguly, Paul Waldie and Marieke Walsh on Twitter @ereguly @PwaldieGLOBE @mariekewalsh
Report an error Editorial code of conduct
Due to technical reasons, we have temporarily removed commenting from our articles. We hope to have this fixed soon. Thank you for your patience. If you are looking to give feedback on our new site, please send it along to feedback@globeandmail.com. If you want to write a letter to the editor, please forward to letters@globeandmail.com.
Comments