U.S. President Donald Trump’s first official visit to Britain is off to a contentious start with the President challenging Prime Minister Theresa May’s Brexit strategy and highlighting her political troubles.

Mr. Trump landed in London on Thursday afternoon for a four-day visit that includes tea with the Queen at Windsor Palace, a black-tie dinner at Winston Churchill’s birthplace and a few rounds of golf in Scotland. But it was his comments about Brexit just before arriving that have already caused difficulty for Ms. May.

During a press conference in Brussels after the NATO summit, Mr. Trump appeared to criticize Ms. May’s new Brexit proposal, which is under attack from Brexit backers within her Conservative Party caucus. Two senior cabinet ministers, including former foreign secretary Boris Johnson, resigned this week over the plan, saying it keeps the country too aligned to the European Union and does not respect the wishes of the people who voted to leave the EU in the 2016 referendum. Mr. Trump has been a keen supporter of Brexit and on Thursday he appeared to echo those concerns.

“I’ve been reading a lot about Brexit over the last couple of days and it seems to be turning a little bit differently where they’re getting at least partially involved back with the European Union,” he told reporters. While saying that he didn’t have any message or advice, he added: “I would say Brexit is Brexit. … The people voted to break it up, so I would imagine that’s what they’ll do but maybe they are taking a little bit of a different route, so I don’t know if that’s what they voted for. I just want the people to be happy.” He also joked that Britain was “a pretty hot spot right now with a lot of resignations” and he has mused about meeting Mr. Johnson.

Ms. May quickly moved to repair the damage. “We have come to an agreement which absolutely delivers what people voted for,” she said in a statement. She also plans to shift the focus during the rest of Mr. Trump’s visit, hoping to steer him toward talk about trade and the growing threat of Russia. Brexit creates “an opportunity to reach a free-trade agreement that creates jobs and growth here in the U.K. and right across the United States,” Ms. May said in remarks during a banquet on Thursday with Mr. Trump at Blenheim Palace, Churchill’s birthplace.

But in an interview with Britain’s Sun newspaper published late Thursday, Mr. Trump said a free-trade deal might be impossible if the country goes ahead with Ms. May’s proposals for post-Brexit ties with the EU. “If they do a deal like that, we would be dealing with the European Union instead of dealing with the U.K., so it will probably kill the deal,” Mr. Trump told the Sun. “If they do that, then their trade deal with the U.S. will probably not be made.”

Dozens of demonstrations protesting Mr. Trump’s visit are planned throughout the country, with the largest expected to take place in central London on Friday. Organizers have been given permission to float a giant balloon depicting Mr. Trump as a baby and they’ve already declared victory by noting that the President is largely avoiding London during his visit. A demonstration supporting Mr. Trump is also scheduled to take place in London on Saturday. On Thursday, Mr. Trump shrugged off the planned protests, telling reporters “they like me a lot in the U.K.”

Mr. Trump’s Brexit intervention came on a crucial day for Ms. May. She was hoping to win over critics of her Brexit proposal with the release of a 104-page document outlining details of the plan. Its key provision is a “customs arrangement” with the EU that would see Britain remain largely within the bloc’s customs union. The customs union is one of the cornerstones of the EU and it allows for the tariff-free movement of goods among member states. It also requires all members to charge the same tariffs on imports from countries outside the bloc. Under Ms. May’s plan, Britain would have the freedom to set its own tariffs, but it would collect and remit EU tariffs on goods moving through the country to EU member states. Brexit Secretary Dominic Raab told the House of Commons that the plan represented a “principled, pragmatic and ambitious future partnership between the U.K. and the EU.”

Hardline Brexit supporters, including Mr. Johnson, have sharply criticized the plan, arguing it was unworkable and left Britain far too aligned with EU regulations on goods. It also would make striking trade deals with other countries difficult because Britain would still have to follow EU rules. The plan also doesn’t deal with trade in services, including financial products, which accounts for 80 per cent of the country’s economy. “Taken as a whole, [the plan] recreates many of the worst aspects of the EU the British people voted to leave,” Tory MP Jacob Rees-Mogg told the House of Commons on Thursday. “This does not respect the referendum result.”

Negotiations with the EU on a Brexit deal resume next week and so far EU negotiators have been cool to the idea. But on Thursday they said they welcomed the plan and would study it closely.

Theresa May survives a Brexit rebellion for now, as Tories face spectre of losing power
July 10, 2018 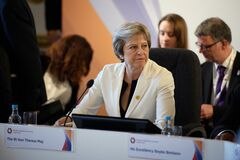 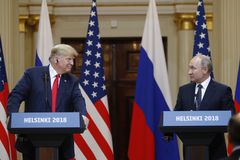 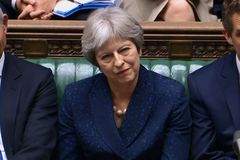