U.S. President Donald Trump on Thursday disputed Puerto Rico’s official death toll of 3,000 from hurricanes last year and accused Democrats of inflating the figure that was reached in an independent academic study.

Mr. Trump bristled at criticism of his administration’s handling of the Puerto Rico disaster as Hurricane Florence approached the coast of North Carolina with heavy rains that forecasters warned would cause catastrophic flooding across a wide swath of the U.S. southeast.

The Republican president said Democrats had inflated the number of dead in Puerto Rico “in order to make me look as bad as possible,” but he did not provide evidence.

The White House, while describing any death from the hurricane as “a horror,” sought to defend Mr. Trump’s handling of the disaster, saying he had “directed the entire administration to provide unprecedented support to Puerto Rico.”

“President Trump was responding to the liberal media and the San Juan mayor who sadly have tried to exploit the devastation by pushing out a constant stream of misinformation and false accusations,” White House spokesman Hogan Gidley said in a statement.

Some well-known Republicans split with Mr. Trump on the issue. Privately, some White House officials were exasperated with the President’s focus on Puerto Rico at a time when Hurricane Florence is bearing down on the Carolinas and other coastal areas.

In a tweet, Mr. Trump said: “3000 people did not die in the two hurricanes that hit Puerto Rico. When I left the Island, AFTER the storm had hit, they had anywhere from 6 to 18 deaths. As time went by it did not go up by much. Then, a long time later, they started to report really large numbers, like 3000.”

Puerto Rico was recovering from Hurricane Irma before Hurricane Maria hit in September, 2017, destroying roads and bridges and leaving much of the Caribbean island without electricity for months.

The death toll from Maria, the most powerful storm to hit the island in almost a century, was raised last month from 64, a number widely discounted as far too low, to 2,975.

That number was produced by public health experts at George Washington University in Washington, in a report commissioned by the U.S. territory’s Governor, Ricardo Rossello.

The study found that those deaths could be attributed directly or indirectly to Maria from the time it struck in September, 2017, to mid-February of this year.

The report compared predicted mortality under normal circumstances and deaths documented after Maria.

Mr. Rossello said Puerto Ricans “do not deserve to have their pain questioned” and backed the study.

“We left this analysis to the scientists and experts, recognizing that there would be many challenges, because we wanted to have a powerful and independent voice to minimize the uncertainty,” he said in a video on Facebook.

George Washington University stood by its estimate. “We are confident that the number – 2,975 – is the most accurate and unbiased estimate of excess mortality to date,” the school said in a statement.

At the same time, the top Republican in Congress, House of Representatives Speaker Paul Ryan, said he had no reason to dispute the official death toll, while Republican Senator Marco Rubio said tragedy should not be politicized.

“I disagree with @POTUS,” Florida Governor Rick Scott, a Republican, said on Twitter.

The emergency response to Maria became highly politicized as the Trump administration was criticized as being slow to recognize the extent of the devastation and too sluggish in providing disaster relief to Puerto Rico, an island of more than 3 million residents.

Thursday’s tweets drew the ire of Carmen Yulin Cruz, the mayor of Puerto Rico’s capital, San Juan, who has sharply criticized both the president and his administration’s response to Maria.

“This is what denial following neglect looks like: Mr Pres in the real world people died on your watch. YOUR LACK OF RESPECT IS APPALLING!” she wrote on Twitter before calling Mr. Trump delusional and unhinged from reality.

On Wednesday, Puerto Rican officials said about 20,000 pallets of water bottles shipped to Puerto Rico after Maria went unused and became too contaminated to drink. 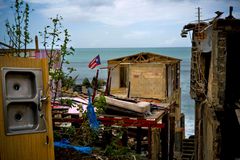 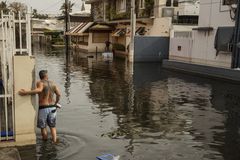