The Trump administration’s former special envoy to Ukraine Kurt Volker told U.S. Congress he should have recognized there was a campaign to put pressure on Ukraine to investigate President Donald Trump’s political rivals in exchange for U.S. military aid.

The revelation, from one of the key witnesses in the Democrats’ impeachment inquiry, is a departure from Mr. Volker’s closed-door testimony from last month. He told investigators he did not initially see a problem with a request from Mr. Trump’s personal lawyer, Rudy Giuliani, for Ukraine to announce an investigation into Burisma, an energy company that had appointed former vice-president Joe Biden’s son to its board. Nor did he consider the requests for investigations coming from Mr. Trump’s allies to be directly tied to nearly US$400-million in delayed security assistance to Ukraine.

“In hindsight, I now understand that others saw the idea of investigating possible corruption involving the Ukrainian company Burisma was equivalent to investigating former vice-president Biden.” Mr. Volker told the House intelligence Committee on Tuesday. ”I saw them as very different. The former being appropriate and unremarkable, the latter being unacceptable.”

Mr. Volker, a career diplomat, has emerged as one of the most important witnesses in the inquiry. Last month, he released a series of text messages involving William Taylor, the top U.S. diplomat in Ukraine, and ambassador to the European Union Gordon Sondland that appeared to show a disagreement among the three senior officials over whether Mr. Trump was demanding to trade political investigations for aid to Ukraine.

Mr. Volker was a former ambassador to NATO under George W. Bush. Republican lawmakers on the House intelligence committee had requested he testify in hopes that he could help prove that Mr. Trump had not acted improperly toward Ukraine.

Instead, Mr. Volker told the committee that weeks of testimony by other witnesses had given him a new understanding of events. “I have learned many things that I did not know at the time of the events in question,” he said.

Mr. Volker testified that he had engaged Mr. Giuliani in order to convince him that the new Ukrainian President, Volodymyr Zelensky, could be trusted. He said he did not initially consider Mr. Giuliani’s request that Ukraine publicly announce investigations into Burisma, along with a widely debunked conspiracy theory Ukraine had interfered in the 2016 U.S. election, as asking Ukraine to meddle in domestic U.S. politics.

Mr. Volker said he worked with Mr. Giuliani and Ukrainian officials on the wording of a public statement in order to convince Mr. Trump that Ukraine was serious about tackling corruption. Plans to issue the statement were ultimately “shelved,” he said, after Ukrainians objected. It was only much later he realized Mr. Trump’s allies were demanding Ukraine open an investigation into Mr. Biden and his family.

“In retrospect, I should have seen that connection differently,” he said. “And had I done so, I would have raised my own objections.”

Mr. Volker was one of four witnesses to testify Tuesday as part of the Democrat-led House impeachment investigation.

Tim Morrison, a long-time Republican congressional staffer and former National Security Council aide, told investigators he was disappointed that Mr. Trump’s July 25 phone call with Mr. Zelensky – which is at the heart of the inquiry – didn’t offer a “a more full-throated statement of support” for Ukraine’s new government.

He testified that he requested the transcript of the call be restricted to avoid leaks that could undermine bipartisan congressional support for Ukraine. But he said the reconstructed transcript had been placed in a hard-to-access computer system by mistake.

“I feared at the time of the call on July 25 how its disclosure would play in Washington’s climate. My fears have been realized,” he said of a whistle-blower’s complaint about the call in September that sparked the impeachment inquiry.

“It is improper for the President of the United States to demand a foreign government investigate a United States citizen and a political opponent,” Col. Vindman testified.

Jennifer Williams, a foreign policy adviser to Vice-President Mike Pence was also on the call. She testified the conversation was “unusual” because “it involved discussion of what appeared to be a domestic political matter,” which had not happened on previous such diplomatic phone calls she had listened in on.

The two officials’ testimony undermined one defence of Mr. Trump: that he had legitimate anti-corruption reasons to ask Ukraine to investigate Mr. Biden and the Democrats. Rather, they said, Mr. Trump was using his office as President to advance his own political interests. Under questioning from Dan Goldman, a lawyer for committee Democrats, Col. Vindman and Ms. Williams said they knew of no credible evidence Mr. Biden had done anything wrong in Ukraine.

Diplomat says he should have realized Trump was withholding aid to Ukraine in push for Biden probe
November 19, 2019 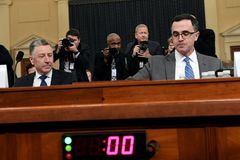 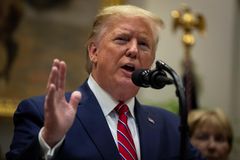