President Donald Trump delivered a rambling tirade against his personal and political foes at an airport hangar in Des Moines on Wednesday, using an unsubstantiated news report to attack the Democratic presidential nominee, Joe Biden, and calling himself a champion of “the farmers” in the heavily agricultural battleground state.

Sounding alternately chipper and deeply embittered, and repeatedly chortling at his own lines, Trump initially appeared determined to use his first trip to the Midwest since leaving the hospital to tear into Biden and his son, Hunter, wielding as his chief weapon a New York Post story instigated by Rudy Giuliani, the former mayor of New York, and roundly denied by the Biden campaign. And Trump did that, at some length.

But soon enough, he moved on to other subjects and other vendettas. There was his call for retribution against people involved in investigating Russian involvement in the 2016 election. “People should pay for the crimes they committed, which turn out to be a total illegal hoax,” Trump declared.

There was his rant against elites who “live behind gated walls” and flood “your communities with illegal immigration, deadly drugs, MS-13 savages that assault, rape and murder innocent Americans” – a return to his harshest rhetoric demonizing Latin American migrants who are in the country illegally. And there were Trump’s myriad other detours mocking James Comey, the former director of the FBI; Beto O’Rourke, the former congressman from Texas and a candidate in the Democratic presidential primary; and Sens. Cory Booker, Bernie Sanders and Elizabeth Warren, who also ran for the Democratic nomination.

Dotting the discursive monologue were references to the coronavirus pandemic and the American economy. The state of Iowa has long been seen as something of a Trump stronghold, but Republicans have grown increasingly concerned that Biden could pull off an upset there and that Democrats could capture a Republican-held Senate seat. Trump expressed some lighthearted dismay that the state appeared to be in play and pointed to, among other things, his administration’s cash support to farmers stricken in his trade war with China.

“Some of the farmers were making more money, the way that I was doing it, than by working their asses off, all right?” Trump said, chuckling. “They were very, very happy.”

At times, Trump flicked at a message many Republicans hope he will use in the coming weeks, attacking Biden for embracing liberal economic policies and arguing that he would imperil an economic recovery. But those were brief notes in a speech defined by a scattershot mixture of grievance and ridicule, and by a continued refusal to grapple with the deep human and economic costs of the pandemic.

In a state battling outbreaks of the virus, Trump urged state governments to remove public-health restrictions, boasted again without evidence of being “immune” to the disease and defended calling it “the China virus” despite pleas from Asian American advocates and lawmakers that he cease doing so. He told the Des Moines crowd to watch forthcoming third-quarter GDP numbers and promised a stock-market surge.

“Does everyone have your 401(k) ready?” Trump asked. “Because it’s going through the roof.”

After opening his speech with an attack on Biden’s son, Trump alluded briefly to his teenage son, Barron, whom the first lady, Melania Trump, revealed on Wednesday had contracted the coronavirus. Trump cited the experience to argue for returning children to in-person schooling.

“He had it for such a short period of time – I don’t even think he knew he had it,” Trump said, adding, “Barron is beautiful and he’s free – free.” 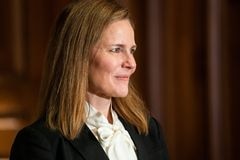 How the market learned to stop worrying and love the blue wave
Subscriber content
October 14, 2020 Trump attacks Biden and calls himself a champion for ‘the farmers’ in rambling Iowa rally address
Subscriber content
October 15, 2020 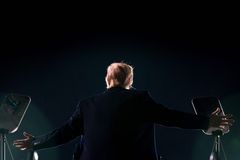