Donald J. Trump serves as President in an age of informality, and he treats the duties and set-piece responsibilities of the presidency with informality. He is chief executive in an era of social media, and his early morning tweets both set and reflect the zeitgeist of the Twitter age. Mr. Trump presides in an age of disruption, and he is a disruptor.

All of which helps explain this weekend.

Just another couple of days in the Trump presidency.

The President, who broke every rule of presidential campaigning to win the White House in 2016, now is breaking nearly every rule of the presidency, departing from customs dating back to even an outsider president such as Andrew Jackson (1829-1837) and an innovator chief executive such as Franklin Delano Roosevelt (1933-1945).

Supporters and detractors alike agree that Mr. Trump is a different kind of president –and wonder whether his departures from form are precursors to a new style of the presidency or merely an aberration.

Presidents have been described in the Brennan critique – ‘’unstable, inept, inexperienced and unethical’’– before. Andrew Johnson, who was impeached in 1868 but not removed from office, was vulnerable on all four counts of the Brennan indictment, and Richard Nixon, who resigned in disgrace in 1974, was guilty of three out of the four. (As a former member of the House and Senate and as vice-president for eight years and president for more than five, he was deeply experienced).

But, still, Mr. Trump stands out, and apart, from his predecessors.

The nature of the presidency, to be sure, is shaped by the cumulative actions of all the occupants of the office, and given that there have been only 44 presidents, each new chief executive gets the chance to shape the presidency. But almost always, they try to fit into the established pattern rather than depart from it.

‘’Presidents try to live up to the dignity of the office that dates to the earliest days,’’ said Shirley Anne Warshaw, a Gettysburg College expert on the presidency. ‘’We have no sense of the President as a monarch but we retain a sense that presidential decisions are made in a very controlled and deliberative manner, and that modern presidents speak in a controlled and deliberative way also. Ordinarily, nothing is done off the cuff.’’

Perhaps the greatest exponent of that thesis was former president Ronald Reagan, who, though a gifted speaker, was accustomed as a one-time Hollywood actor to following a script. ‘’Reagan as president understood the majesty of the presidency and in fact he revered the presidency,’’ said Craig Shirley, the author of four books on the 40th president. ‘’Even Reagan’s worst critics didn’t feel he abused or ruined the presidency.’’

Even so, presidential behaviour and the content of presidencies inevitability are tied to the times, and to the communications technology of each era. FDR, the standard against which all the presidents who followed him since 1945 have been judged, was a master of radio, just as John F. Kennedy mastered television and Mr. Trump is the acknowledged master of the political use of Twitter.

‘’The presidency is one office under Franklin Pierce and another, quite different one, under Franklin Roosevelt,’’ said Richard Norton Smith, who served as director of the Herbert Hoover, Dwight Eisenhower, Gerald Ford, and Reagan presidential libraries, is the author of a Hoover biography and is at work on a Ford biography. ‘’The presidency reflects the strengths and weaknesses, the skills and the shortcomings, of the occupant. Presidencies are shaped not only within constitutional bounds but also within the age in which the president serves.’’

But other presidents have served in periods of disruption, cultural upheaval and technological change. Some of them - FDR, for example, for his down-home rhetoric despite his aristocratic background, or Barack Obama, for offering a new vision of who can occupy the Oval Office despite his elitist education at Columbia and Harvard, the two alma maters of FDR - have given new shape to the presidency.

Mr. Trump may be doing that as well; only the behaviour of his successors will tell us whether he is a pathfinder or an aberration.

But even as Mr. Trump occupies the White House, the popular standing of perhaps his most traditional recent predecessor, George H. W. Bush, 93 years old, is soaring.

‘’President Bush was very sensitive to the way his predecessors shaped the presidency,’’ said former New Hampshire governor John H. Sununu, Mr. Bush’s White House chief of staff and later the author of The Quiet Man, an account of Mr. Bush’s presidential years. ‘’He knew he was part of a great and long parade. He was guided by the tradition of his family but also by the tradition of the presidency.’’

Not so Mr. Trump, who may be contemplating firing the special prosecutor he considers a threat to his presidency.

Before Sunday was out, some Republicans rushed to the defence of Mr. Mueller.

‘’People see that as a massive red line that can’t be crossed,’’ Trump critic GOP Senator Jeff Flake of Arizona said on the CNN show State of the Union. A similar warning came from Senator Lindsey Graham, a South Carolina Republican. ‘’If he tried to do that,’’ said Mr. Graham, who has supported the President in recent months, ‘’that would be the end of his presidency, because we’re a rule-of-law nation.’’ 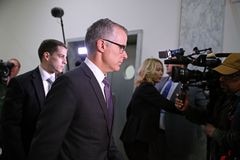 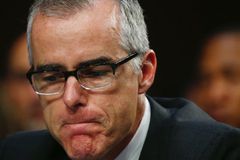