President Donald Trump renewed a threat on Friday to close the border and impose tariffs on Mexico if the flow of migrants into the country doesn’t stop, saying the U.S. asylum system was at capacity and promising to send more troops to the border.

“Our country is full,” Mr. Trump told a meeting of law-enforcement and border-patrol officials in Calexico, Calif., a border city 190 kilometres east of San Diego. “Can’t take you any more. I’m sorry. Can’t happen. So turn around.”

The U.S. President’s visit to the border, which included a tour of a newly completed 3.6-kilometre border fence reconstruction project, comes a day after Mr. Trump had appeared to back down from a pledge to shut down some ports of entry if Mexico didn’t stop asylum seekers and drugs from coming into the United States.

Mr. Trump denied on Friday that he had decided not to close the border for a year to give Mexico time to crack down on the number of Central Americans travelling north to the United States. He said he could enact 25-per-cent tariffs on Mexican auto imports with as little as a day’s notice, even as he praised Mexico for stepping up deportations.

“I’m totally willing to close the border, but Mexico over the last four days has done more than they’ve ever done,” he said. “They’re apprehending people now by the thousands and bringing them back to their countries.”

The U.S.-Mexico border has in the past several months seen a surge of migrants arriving to claim asylum at ports of entry, or crossing illegally to turn themselves in to border-patrol agents. But Mexico has not announced any change in its immigration strategy in the days since Mr. Trump’s most recent threat to close border crossings.

In February, the government of Andres Manuel Lopez Obrador shut down a program to offer migrants humanitarian visas to travel through Mexico. Last weekend, Mexico said it would begin issuing the visas again, giving priority to women, children and elderly migrants.

Mr. Lopez Obrador has carefully avoided a confrontation with the U.S. President. He dismissed concerns that Mr. Trump could impose tariffs on Mexico and played down Democratic House Speaker Nancy Pelosi’s demands that Mexico agree to additional concessions before Congress ratifies the U.S.-Mexico-Canada Agreement (USMCA).

“I would say to Mexican and foreign investors, and to those who participate in the stock market, to keep calm, that our relationship with the United States is a very good one, that the free-trade agreement will be ratified, that there is no economic or financial problem.” Mr. Lopez Obrador told reporters on Friday.

Analysts questioned whether Mr. Trump could actually impose tariffs on Mexico. “I don’t think he has the authority to really do this. I think it’s just posturing, as we know he does,” said Jorge Guajardo, a former Mexican diplomat.

The Trump administration signed a deal with Mexico last year that explicitly prevents it from imposing auto tariffs on the country. The letter, a side-agreement to the USMCA, exempts 2.6 million Mexican-made vehicles and US$108-billion worth of auto parts annually from any potential future tariffs the United States levies under section 232 of the Trade Expansion Act.

Unlike the main text of USMCA, which must still be ratified by the U.S. Congress, the autos side deal came into effect as soon as it was finalized last November. The United States signed a similar exemption deal with Canada at the same time.

Mr. Guajardo, now a business consultant in Washington, pointed to another obstacle to Mr. Trump’s threatened tariffs: Under the Trade Expansion Act, he would have to get the Commerce Department and the Pentagon to sign off on the levies, and prove that they are being imposed for national-security purposes. That would be a tall order when he has already explicitly said they are for a completely different purpose. Even if the President did somehow manage to enact the levies, they would be overturned swiftly in court.

Mr. Trump’s latest visit to the border comes weeks after he declared a national emergency to fund construction of a wall. Both the House and Republican-controlled Senate passed bills to end the national emergency, but they did not get enough votes to prevent a veto by Mr. Trump.

The Trump administration faces several lawsuits over his plans to redirect military funds toward construction of a border wall. Hours before the President arrived in California, state Attorney-General Xavier Becerra said California and 19 other states would ask a court for a preliminary injunction to block Mr. Trump’s national-emergency declaration. The Democratic-controlled House of Representatives said on Thursday that it also plans to challenge the move in court.

Mr. Trump also used the border visit to double down on much of his 2016 campaign rhetoric, including promising to restrict family-based immigration. “Do you think they give us their finest?” he said of a diversity visa lottery program that Mr. Trump has also promised to end. “I don’t think so.” 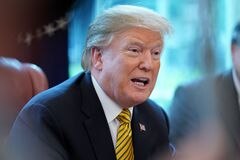 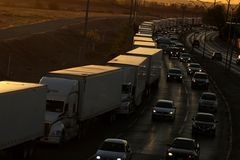 Trump pulls back from shutting down the border with Mexico but threatens future auto tariffs
April 4, 2019 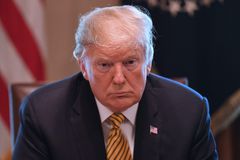