France urged Tunisia on Wednesday to name a new prime minister and cabinet to replace the government removed by President Kais Saied when he froze parliament and assumed governing authority in a move decried as a coup by his opponents.

A decade after ending autocratic rule through a popular uprising, Tunisia faces the sternest test yet to its democratic system and Western countries that have applauded its political transition have expressed concern.

Saied, who says his actions are constitutional but has yet to set out his next steps, has been urged by the United States to stick to democratic principles. He met security chiefs on Wednesday, the presidency said.

Backed by the army, Saied’s actions included suspending parliament for 30 days. Opponents including the Islamist Ennahda party, parliament’s biggest, have accused him of a power grab.

The head of Tunisia’s journalists’ syndicate Mahdi Jlassi said a foreign reporter had been briefly detained by police on Wednesday while reporting in a district of the capital.

On Monday the U.S. State Department had said it was “particularly troubled” by police having raided the Al Jazeera news bureau in Tunis and urged “scrupulous respect for freedom of expression and other civil rights”.

Saied’s moves followed protests by Tunisians who are fed up with years of economic malaise and political paralysis since the 2011 uprising that ignited the Arab Spring.

Saied, an independent elected in 2019, has said he acted to save the country from corruption and plots to sow civil strife.

His move followed months of deadlock and disputes pitting him against Prime Minister Hichem Mechichi and a fragmented parliament, as Tunisia descended into an economic crisis exacerbated by one of Africa’s worst COVID-19 outbreaks.

Potentially complicating the crisis further, the judiciary said it was investigating Ennahda and the second biggest party in parliament – Heart of Tunisia – on suspicion of receiving foreign funds during the 2019 election campaign.

The judiciary, widely seen in Tunisia as independent from politics, said its investigation started 10 days before the president’s moves.

A senior Ennahda official denied it had committed any violations. Riadh Chaibi, the political adviser to Ennahda’s leader, told Reuters raising the issue now aimed “to incite against Ennahda and create a more tense atmosphere”.

Heart of Tunisia could not be reached for comment.

Though Ennahda called on Sunday for supporters to come out on the streets against Saied’s actions, it has since called for calm and sought national dialogue.

There was no sign of protests or other disturbances on Wednesday though a heavier security presence was in place in central Tunis. The army also remains at the parliament, government and television buildings it surrounded on Sunday.

Saied reiterated a long-standing rule banning gatherings of more than three people in public, but there was no sign it was being enforced as people moved and gathered normally.

Saied has also tightened some existing COVID-19 restrictions including a nightly curfew and ban on travel between cities.

Civil society organisations that have played a key role in politics since 2011 have not denounced Saied’s moves but have called on him to quickly lay out his plans and end the emergency period within a month. 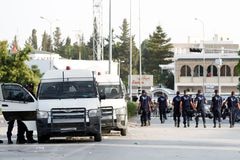 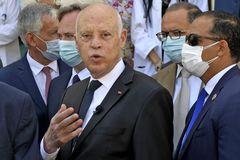