Turkey has sent major reinforcements to Syria’s northwestern Idlib region and “all options are on the table,” a senior official said on Sunday, as Ankara tries to stem rapid advances by Syrian government forces.

The government offensive in Idlib, the last major enclave of opposition to President Bashar al-Asad, has driven more than half a million people from their homes towards the closed Turkish border, threatening a new humanitarian crisis in Syria.

Turkey, which already hosts 3.6 million Syrian refugees, says it cannot absorb any more and has demanded Damascus pull back in Idlib by the end of the month or face Turkish action.

Large convoys of military vehicles carrying tanks, armoured personnel carriers and other equipment have crossed into Syria to reinforce a dozen Turkish military positions, several of which are now surrounded by advancing Syrian troops.

“There was a serious troop and military equipment support sent to Syria’s Idlib region in recent weeks,” the official, speaking on condition of anonymity, told Reuters.

Three hundred vehicles entered Idlib on Saturday, bringing the total to around 1,000 this month, he said. He declined to say exactly how many new troops had been deployed, but described it as a “notable amount.”

“The observation points have been fully reinforced,” the official said. “The Idlib front has been strengthened.”

The Syrian Observatory for Human Rights, a UK-based war monitor, said 1,240 Turkish military vehicles crossed into Idlib in the last week, along with 5,000 soldiers.

The fighting in Idlib has shaken the fragile co-operation between Turkey, which backs rebels who once hoped to topple Assad, and Russia, whose support helped the once-beleaguered president bring most of the country back under his control.

On Monday, eight Turkish military personnel were killed in shelling by Syrian government forces, prompting Turkey to tell Russia to “stand aside” while its forces to bombard dozens of Syrian army targets in retaliation.

“The regime, with Russia’s support, has been violating all agreements and accords,” the official said. “We are prepared for any event. Of course, all options are on the table.”

Despite Turkey’s disagreement with Russia over Idlib, the official described talks between them in Ankara on Saturday as positive. The two sides will meet again in the coming week.

Syria’s armed forces said on Sunday they have recaptured more than 600 square kilometres (230 square miles) of territory, taking control of dozens of towns and villages in recent days, and said they would maintain the fight.

“Our brave army will continue to carry out its sacred duties to clear the entire geographic territory of Syria from terrorism and its supporters,” the armed forces said in a statement.

Ankara has urged Moscow to rein in the Idlib offensive, which has brought Syrian government forces within 10 miles (16 km) of the provincial capital Idlib city, home to more than 1 million people.

Defence Minister Hulusi Akar reiterated on Sunday that they must pull back soon. “If the regime forces are not withdrawn by the end of February, we will take action,” he told Hurriyet newspaper in an interview.

On the eastern flank of the opposition-held enclave, the Observatory said advancing government forces had seized all but a 2 km stretch of the M5 highway, Syrian’s main north-south road which links Syria’s two main cities Damascus and Aleppo.

Pope Francis called on Sunday for respect of humanitarian law in Idlib, saying reports from the province were “painful … particularly regarding the conditions of women and children, of people forced to flee from a military escalation.” 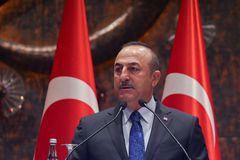 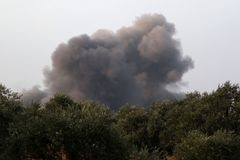 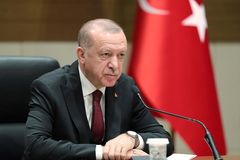