Turkey’s president urged Russian President Vladimir Putin in a telephone call Friday to “restrain” the Syrian government and halt the humanitarian crisis unfolding in northwestern Syria as Damascus wages a military offensive against the last rebel stronghold in the country.

The two leaders expressed their commitment to “all agreements,” Mr. Erdogan’s office said, but did not elaborate.

Putin expressed “serious concern with continuing aggressive actions by extremist groups (in Idlib),” the Kremlin said in a statement. “The necessity of unconditional respect for the sovereignty and territorial integrity of Syria was underlined.”

The discussion between the two leaders came amid mounting tensions as the Syrian government pushes ahead with an offensive that has displaced hundreds of thousands of people. The offensive has tested ties between Turkey and Russia, who had been working together closely in Idlib, despite backing opposing sides in Syria’s nine-year civil war.

Mr. Erdogan this week warned of an “imminent” operation against Syria to compel it to pull its forces back behind Turkish positions by the end of February. He said earlier Friday that the phone call with Mr. Putin would determine Turkey’s position on Idlib.

Two Turkish soldiers were killed in an air strike in Idlib on Thursday after an attack by Ankara-backed opposition forces that targeted Syrian government troops. The deaths came after Mr. Erdogan threatened to expand his nation’s involvement in Syria if another one of his troops were hurt.

Earlier, Mr. Erdogan also held a joint call with French President Emmanuel Macron and German Chancellor Angela Merkel in which he said that “the Syrian regime and its backers’ aggression in Idlib must be stopped.” He also emphasized the need for “strong support and concrete action” to halt the unfolding humanitarian crisis, his office said.

It followed a similar call by Ms. Merkel and Macron to Putin on Thursday, during which they proposed urgent talks with Mr. Erdogan to ease tensions. Mr. Erdogan told reporters the European leaders had proposed a four-way meeting in Istanbul on March 5, but that Mr. Putin had not responded to the offer.

As Mr. Erdogan pressed ahead with diplomatic efforts on Idlib, Turkey’s Defence Minister Hulusi Akar, accompanied by military commanders, travelled to the Turkish-Syrian border to inspect Turkish troops. He spoke with troops deployed in Idlib telling them he believed they would “succeed” in their duties in Syria.

Also on Friday, Russian warplanes struck rebel-held areas in the region as insurgents and government forces exchanged artillery and mortar fire in other parts of Idlib province, the last rebel stronghold in the country, opposition activists said.

A Russian-backed government offensive against Idlib and parts of Aleppo province has led to the displacement of more than 900,000 people, half of them children, since Dec. 1, according to the UN.

On Friday, Oleg Zhuravlyov, the head of the Russian military’s Center for Reconciliation in Syria, denied that “hundreds of thousands of peaceful residents of the (Idlib) province” were being forced to the border with Turkey.

“There are no verifiable photo or video materials or other evidence that would confirm the statements about around one million refugees from the Idlib de-escalation zone moving toward the Syrian-Turkish border,” he said.

The Center urged Turkey to “take all necessary measures to ensure voluntary and safe passage of residents of Idlib’s eastern and southern parts to areas controlled by the Syrian government.”

Russian officials have said they hold Turkey responsible for the collapse of the ceasefire deal in Idlib, saying Ankara had not reined in militants who continued attacking Syrian and Russian targets.

Tension in the region has been escalating in recent weeks as Turkey sent thousands of soldiers into Syria in a show of force.

At least 15 Turkish soldiers have been killed in Syria in February amid the offensive by Syrian President Bashar Assad’s forces aimed at recapturing remaining opposition-held areas in the region.

The Britain-based Syrian Observatory for Human Rights reported Russian air strikes near the rebel strongholds of Atareb, Ariha and Qmenas. It added that on the southern edge of Idlib, Turkish troops and rebels exchanged shelling with Syrian government forces. 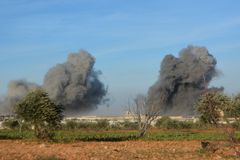 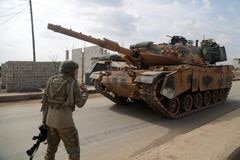 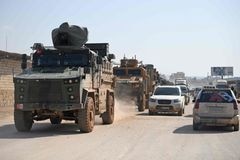