Two Canadian companies have sold digital tools to authorities in Myanmar that can be used to extract and decrypt information from computers and cellphones, raising fears that the country’s coup regime is using them to target its opponents.

Both OpenText and Magnet Forensics say they sold the equipment before the coup earlier this year and have halted any further sales to Myanmar. Neither company’s previous sales appear to violate Canadian sanctions that bar direct transactions with the country’s military.

But the tools for accessing information from digital devices, including deleted data, remain in the hands of Myanmar authorities now that the military has removed the country’s civilian government.

Human-rights advocates say the sale of such tools to Myanmar gives authorities there Western-backed technological capacity to monitor and interfere with people who have opposed the junta and fought the regime. Across Myanmar, dissidents say security forces are routinely stopping people to examine phones and search for anti-military content.

Myanmar budgetary records were obtained by Justice For Myanmar, a research and advocacy group, and were further analyzed by investigative journalism organizations Lighthouse Reports and the Organized Crime and Corruption Reporting Project.

The records show that Myanmar’s transport and communications ministry bought equipment for a digital forensics lab for retained data and devices. Among the acquisitions were Magnet AXIOM and Magnet AXIOM Cloud – both made by Magnet Forensics – as well as EnCase Forensic V8 and EnCase Mobile Investigator, made by OpenText.

They are powerful tools that give authorities the ability to peer deeply into a device by decrypting messages, reviving deleted data, bypassing passwords and accessing cloud storage and social-media accounts.

“Seizing a phone is a normal phenomenon in [Myanmar],” said Ko Ting Oo, General Secretary of the All Arakan Students’ & Youths’ Congress, which has advocated for democracy in the country.

“After seizing the phone, they check all of the data on the detainee’s phone. They even check people’s phone on the bus or vehicles in their check points. They check Messenger, Viber, Facebook status.”

In particular, authorities are searching for any content that could be deemed to be “against them.”

In statements, the Canadian companies said they had sold their technology to the Myanmar government before the Feb. 1, 2021, military takeover.

“Following the coup, we terminated all relationships with the government of Myanmar and no longer provide any support or product updates,” said Chris Plunkett, vice-president of corporate communications at OpenText. The company is “in full compliance” with Canadian sanctions, he said.

Magnet Forensics said in a corporate statement that it “has monitored developments in Myanmar carefully. In 2020, given the deteriorating human-rights situation, the company decided to not renew the single licence of its software in the country held by the Myanmar Police and to restrict any future sales in the jurisdiction.”

The tools continue to be functional even without updates, although their ability to extract data can diminish over time as the makers of cellphones and apps change the way they store information.

Digital forensics technology, like that sold by the two companies, can be a valuable tool for authorities to monitor and disrupt illicit activity, such as sexual exploitation, drug networks and human trafficking.

Over the past few years, the government of Canada has funded Project Relay, an Interpol initiative that has delivered training and technology to Bangladesh, Bhutan, India, Myanmar, Nepal, Sri Lanka and Thailand. It is designed “to tackle the growing challenges posed by migrant smuggling in these regions,” Interpol says, and includes “providing technology to strengthen operational capabilities, particularly at key border points.”

Canada’s support for that program, which has included federal spending of up to $18-million a year, has been controversial. Last year, then-foreign affairs minister François-Philippe Champagne told the CBC that “the biggest victims of these irregular migratory flows are often women and children. Our position, our funding, is aimed at stopping those flows.”

The Myanmar budget documents show the acquisition of surveillance and digital forensic technology from 40 Western manufacturers and developers, according to a Lighthouse Reports analysis.

Justice For Myanmar has been bluntly critical: “Any international business that supplies arms and dual-use goods to Myanmar is complicit in the shocking human-rights violations inflicted on the people,” the group said in a statement.

Inside Myanmar, those who have opposed the coup say they worry about how the military regime could use the sophisticated capabilities enabled by the technology from Canada and other countries.

One of the most frequent requests to Access Now, which operates a digital-security helpline for civil society around the world, is about the military seeking to take over the accounts of citizens, said Raman Jit Singh Chima, global cybersecurity lead for the organization.

“Right now, the junta is very, very keen to be able to monitor, track and as far as possible intercept communications of people at a mass-surveillance level,” he said. They are “targeting people they regard as critics and potential opponents.”

Companies such as Magnet describe their tools as digital forensic products that cannot, for example, intercept data as it travels through networks to a cellphone.

But “the line between what some firms call forensics technology and what is in fact surveillance technology is very thin,” Mr. Chima said.

It has been clear for much of the past year that selling to Myanmar could be problematic, he said, pointing to a government crackdown on dissidents and journalists that long preceded the coup.

Any company that has sold technology to Myanmar in that time should know “what sort of complicated and human-rights-infringing environment they’ve been entering into,” he said.

Editor’s note: An earlier version of this story misnamed the Organized Crime and Corruption Reporting Project. 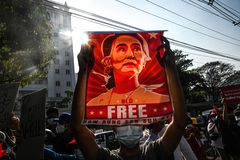 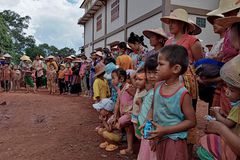