Uganda banned social media and beefed up security in the capital on Tuesday, two days ahead of a presidential election pitting Yoweri Museveni, one of Africa’s longest-serving leaders, against opposition front-runner Bobi Wine, a popular singer.

Campaigning ahead of the vote has been marred by brutal crackdowns on opposition rallies that have left scores dead and the repeated intimidation and arrest of some opposition candidates, their supporters and campaign staff.

Videos posted on social media on Tuesday showed a convoy of armoured military vehicles heading toward Kampala and then moving slowly through various streets in the heart of the capital, which typically votes against Museveni.

In a television address on Tuesday evening, the 76-year-old leader who took power in 1986, said he had met with the security forces and they were ready to defend any Ugandans worried about coming out to vote because of intimidation by the opposition.

“There is no threat we cannot defeat,” said Museveni, wearing a military camouflage jacket. “We have got all sorts of means, simple and complex.”

The European Union said on Tuesday it expected Uganda to provide a level-playing field for all voters to exercise their democratic rights without fear of intimidation or violence.

“The excessive use of force by law enforcement and security agencies has seriously tarnished this electoral process,” said Josep Borrell, the EU’s top diplomat. He said the bloc’s offer to deploy a small team of electoral experts was not taken up.

Museveni apologized for the inconvenience caused by the ban on social media and messaging apps but he said Uganda had no choice after Facebook took down some accounts which backed his ruling National Resistance Movement (NRM) party.

“If you want to take sides against the NRM, then that group should not operate in Uganda,” he said. “We cannot tolerate this arrogance of anybody coming to decide for us who is good and who is bad.”

In a letter seen by Reuters to internet service providers dated Jan. 12, Uganda’s communications regulator ordered them to block all social media platforms and messaging apps until further notice.

Facebook said on Monday it had taken down a network linked to Uganda’s ministry of information for using fake and duplicate accounts to post ahead of this week’s election.

At 38, Wine is half Museveni’s age and he has attracted a large following among young people in a nation where 80 per cent of the population are under 30.

Wine is considered the front-runner among 10 candidates challenging Museveni, who brought stability to the country after the murderous reigns of dictators Milton Obote and Idi Amin.

While security forces have intimidated the opposition at previous elections, the run up to this year’s vote has been especially violent. In November, 54 people were killed as soldiers and police quelled protests after Wine was detained.

The authorities say opposition rallies break COVID-19 curbs on large gatherings in some parts of the country. Rights groups say the restrictions are a pretext for muzzling the opposition.

On Tuesday, Wine said soldiers raided his home in Kampala and arrested his guards while he was giving an interview to a Kenyan radio station. He also said a team member who works mainly as a mechanic was shot dead by the military overnight.

Reuters was not immediately able to verify the claims and a military spokesmen did not respond to a call seeking comment.

Patrick Onyango, police spokesman for Kampala, denied Wine’s home had been raided or that anyone was arrested.

“Any efforts to block online access to journalists or members of the public are unacceptable breaches of the right to information,” it said in a statement.

South African telecoms company MTN Group, the leading mobile operator in Uganda with 60 per cent of the market, said it had complied with the blocking order and was working with the authorities to limit the scope and duration of the disruption.

Wine has been using Facebook to relay live coverage of his campaigns and news conferences after he said many media outlets had declined to host him. Most radio and TV stations are owned by government allies and Uganda’s leading daily is state-run.

Museveni has won every election since the first under his presidency in 1996, though they have been tarnished by intimidation of the opposition and accusations of vote rigging.

Uganda is a Western ally, a prospective oil producer and is considered a stabilizing force in a region where war has plagued some neighbours. It also contributes the biggest contingent of an African Union force fighting Islamist insurgents in Somalia. 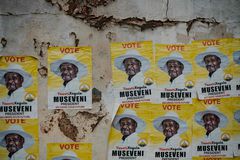