The British government has bowed to growing pressure to help self-employed workers affected by the new coronavirus outbreak by offering payments that will cover most of their lost income.

Chancellor of the Exchequer Rishi Sunak announced on Thursday that the payments will be worth 80 per cent of lost income up to a monthly maximum of £2,500, or $4,285.

The finance minister said the measure will help the vast majority of the country’s five million self-employed workers, but the program won’t be in place until June and it’s only open to people who have filed tax returns for three years. He also warned that these workers could face higher taxes in future to help recover the cost.

The package is just the latest effort by Britain and other governments around the world to address the growing economic fallout from the pandemic as businesses shut down and millions of people are thrown out of work. The government had already unveiled plans to help businesses and salaried workers. But it’s far from clear whether it all will be enough.

The U.K. has 11,658 confirmed cases of the virus and 578 deaths, and both figures have been rising sharply recently. Jennifer Harries, the Deputy Chief Medical Officer for England, warned on Thursday that measures to control the virus, including lockdowns, could be needed for six months.

While quantifying the economic cost of the outbreak is all but impossible, economists say there’s little doubt that a global recession is likely. “We expect the global economy to contract by 0.5 per cent this year, implying a recession more severe than the one in 2009 during the global financial crisis,” said a report from TD Economics released Thursday.

The Bank of England also said on Thursday that “the scale and duration of the shock to economic activity, while highly uncertain, will be large and sharp.” But it added that the impact “should ultimately prove temporary, particularly if job losses and business failures can be minimized.”

The costs of the various actions to prop up the economy are also piling up. Britain has already launched a program of grants and loans worth more than £330-billion to support businesses affected by the virus.

The government also said it would cover up to 80 per cent of the income of laid-off salaried employees, but it then faced calls to do something for self-employed workers and people on contract.

The plan announced Thursday is expected to cost at least £35-billion. Mr. Sunak acknowledged that “these last 10 days have shaken our country and our economy.” And he insisted that the actions taken by the government were necessary regardless of the cost.

Britain has been under a near total lockdown since Monday and the strict measures will last for at least three weeks. All non-essential shops have been closed and people have been ordered to work from home unless absolutely necessary. Public gatherings of more than two people (families excluded) have been banned and train services curtailed.

On Thursday, the government gave police the power to use “reasonable force” if necessary to enforce the new rules and it introduced a series of fines for offenders.

Prime Minister Boris Johnson also hasn’t brought in the military to help enforce the lockdown or called for police roadblocks to monitor people like other countries have done.

However, some police forces have taken matters into their own hands. The North Yorkshire Police in northern England said on Thursday that officers would start “stopping vehicles and asking motorists where they are going, why they are going there.”

“We sincerely hope that we won’t have to resort to enforcement action, but if people do not comply, we will,” said Mike Walker, the Assistant Chief Constable in North Yorkshire. 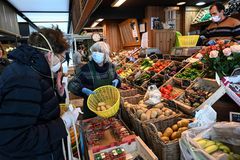