Britain has escalated its growing feud with Russia, kicking out 23 diplomats and raising tensions to levels not seen in decades. Canada and other Western allies offered little more than words of support and Russia hit back with a vow to retaliate.

Britain also suspended high-level contacts with the Kremlin after Prime Minister Theresa May directly implicated Moscow in the poisoning of former Russian double agent Sergei Skripal and his daughter last week in Salisbury. Ms. May said Britain would also pull all dignitaries from this summer’s World Cup in Russia and consider moves to toughen anti-espionage laws and freeze Russian assets.

“There is no alternative conclusion other than that the Russian state was culpable for the attempted murder of Mr. Skripal and his daughter − and for threatening the lives of other British citizens in Salisbury,” Ms. May told the House of Commons on Wednesday. She added that it was “essential that we now come together – with our allies − to defend our security, to stand up for our values and to send a clear message to those who would seek to undermine them.”

Prime Minister Justin Trudeau said Russia’s likely involvement in the chemical attack must be condemned in the strongest terms.

“The attack is despicable and unacceptable that there be chemical weapons used against citizens of the United Kingdom,” he said Wednesday, adding that he spoke with Ms. May to offer Canada’s support.

But the Canadian government stopped short of announcing any new sanctions on Russia.

Russia rejected the allegations and the country’s embassy in London said it “considers this hostile action as totally unacceptable, unjustified and shortsighted.” Ambassador Alexander Yakovenko also said he expected British diplomats to be kicked out of Moscow. “There will be expulsions. As you understand in diplomatic practice, there will be answers from the Russian side,” Mr. Yakovenko told reporters in London.

In Moscow, Dmitry Peskov, a spokesman for President Vladimir Putin, said Britain had provided “baseless accusations which aren’t backed up by any evidence.”

British investigators have said Mr. Skripal, 66, and his 33-year-old daughter, Yulia, were exposed to a class of nerve agents developed by the Soviet Union in the 1980s. Both remain in critical condition in hospital and a police officer who was also exposed is in serious condition.

Mr. Skirpal worked for Russian military intelligence in Moscow in the 1990s while also secretly supplying information to Britain’s MI6, in exchange for cash. He was arrested in Moscow in 2004 and convicted of treason, but settled in Britain in 2010 after winning release as part of a spy swap between Russia, Britain and the United States. More than 200 police and counterterrorism experts are investigating the poisoning but have no suspects.

Russia has around 58 diplomats in London so the expulsion represents about 40 per cent of its contingent. It’s likely Russia will expel a similar number of British diplomats and it has threatened to kick out British media outlets as well if Britain takes action against RT, the Kremlin-run television station.

There were expectations in Britain that Ms. May would go further and expel the Russian ambassador or target the assets of specific Russians in London. Britain kicked out 90 diplomats in 1971 for espionage but ejected just four in 2007 after blaming Russia for the murder of former Russian spy Alexander Litvinenko, who died in London from drinking tea laced with radioactive polonium-210.

Some British politicians had also been calling for a boycott of the World Cup and demanding that the Britain’s broadcast regulator pull the licence of RT. While Ms. May did not go that far, she noted that the expulsions were the biggest in more than 30 years and she said the government will take further steps if necessary. She also called on Western allies to “stand up and say to Russia, ‘You cannot do this.’ ”

European leaders voiced support but little more. A spokesman for the French government, Benjamin Griveaux, said on Wednesday that it would wait for “definitive conclusions” and firm evidence before deciding what action to take.

German Chancellor Angela Merkel said her government took the British findings “very seriously” and she called for a “common European view” on how to respond. However, she also cautioned against going too far. “We must still talk responsibly with the Russians despite all differences of opinion,” she told German broadcaster ARD.

EU leaders will meet next week and plan to discuss the poisoning.

U.S. President Donald Trump told Ms. May on Tuesday that he was with Britain “all the way” in the case, but made no mention of taking any action. At the United Nations Security Council, which Britain is pushing to take up the issue to put more pressure on Moscow, U.S. Ambassador Nikki Haley spoke out strongly against Russia on Wednesday.

Bill Browder, a U.S.-born financier and anti-Putin campaigner who has led the international effort to sanction human-rights abusers worldwide, said Ms. May’s response to the attack was too weak.

“Her response is mostly a statement of intent as opposed to a statement of action,” Mr. Browder said in an interview on Wednesday. “If the action is only to kick out 23 diplomats and not let officials go to the World Cup, it will be horribly insufficient relative to the gravity of … an act of state-sponsored terrorism using chemical weapons.” He added: “Britain has a big responsibility – not just to its own citizens but to all of its allies – because if Putin gets away with these things, he’ll do them more.” 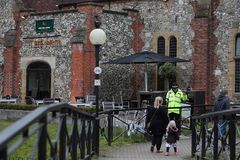 Follow Paul Waldie and Michelle Zilio on Twitter @PwaldieGLOBE @michellezilio
Report an error Editorial code of conduct
Due to technical reasons, we have temporarily removed commenting from our articles. We hope to have this fixed soon. Thank you for your patience. If you are looking to give feedback on our new site, please send it along to feedback@globeandmail.com. If you want to write a letter to the editor, please forward to letters@globeandmail.com.
Comments are closed