Jill Lawless
LONDON
The Associated Press
Published May 10, 2021 Updated May 11, 2021
For Subscribers
Comments
Text Size
Please log in to listen to this story. Also available in French and Mandarin. Log In Create Free Account

The leader of Britain’s main opposition Labour Party shook up his top team after disappointing election results, moving his party chairwoman, economy spokeswoman and chief whip in an attempt to exert control over a fractious membership.

But the moves by Labour leader Keir Starmer spurred new recriminations in a party that has not been able to make a breakthrough against Prime Minister Boris Johnson’s governing Conservatives.

“The Labour Party must be the party that embraces the demand for change across our country,” Starmer said. “That will require bold ideas and a relentless focus on the priorities of the British people. Just as the pandemic has changed what is possible and what is necessary, so Labour must change too.”

The relatively modest changes drew criticism both from those who wanted a bolder shuffle and from those angry at the sidelining of Rayner, who is popular with the social democratic party’s left wing. She remains deputy leader, and Starmer also handed Rayner new responsibilities countering powerful Cabinet Minister Michael Gove, in a sign of her strong base within the party.

Labour has been out of office since 2010, and has been struggling to find a way back to power. In elections last week, Labour was defeated by the Conservatives in Hartlepool, a northeast England parliamentary seat that it had held for decades, and lost hundreds of posts on local authorities across England. The results demonstrated the Conservatives’ success at winning over voters in former industrial towns who feel neglected by successive governments over several decades. Johnson’s promise of jobs and investment has helped the Tories win a clutch of northern England seats long held by Labour.

Labour came third in an election for the Scottish Parliament that saw the pro-independence Scottish National Party win a fourth term in power.

Labour did better than expected in Wales, extending its 22 years at the helm of the semi-autonomous Welsh government. Labour’s vote also held up in big cities, with its candidates winning mayoral races in London, Manchester, Liverpool, the West of England and West Yorkshire. And the party, founded a century ago to represent the industrial working class, made gains at the local level in affluent southern areas and university towns.

Starmer was elected leader a year ago, replacing Jeremy Corbyn, who led Labour to election defeats in 2017 and 2019. Starmer, a more centrist figure than the left-wing Corbyn, has struggled to unite a party divided over how economically radical it should be. Last week’s disappointing election results have fanned the flames of party discontent.

“What we want is a strategy for winning from this leadership, because it’s clear from what happened over the weekend, particularly what happened in Hartlepool, there’s a problem with the strategy,” Labour lawmaker Diane Abbott, a Corbyn ally, told the BBC on Monday.

Polling expert John Curtice of the University of Strathclyde said Labour’s problem is even broader than that. Five years after Britain narrowly voted to leave the European Union, and more than a year after it officially quit the bloc, the electorate remains split between supporters and opponents of Brexit.

Curtice said Labour “is a party of `remain’ voters the party of young voters, of graduates, of the socially liberal, of people living in London. It is not the party of the working class.”

Curtice said Labour had barely begun to grapple with that major shift.

“Its reaction seems to be, `Could we please go back to where we were?”' he said. 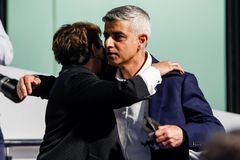 Scotland at a crossroads: Super Thursday vote could spark another independence showdown with the U.K.
Subscriber content
May 5, 2021