The British government is moving away from its gradual approach to tackling the new coronavirus and has started toughening some measures, but Prime Minister Boris Johnson has resisted imposing the kind of total lockdown seen in several other countries.

On Friday, Mr. Johnson ordered all pubs, restaurants, casinos, museums, theatres and gyms to close for at least a month, when then the order will be reviewed. The government also asked 68,000 retired doctors and nurses to return to work, and it unveiled a plan to pay nearly all of the wages of workers who have been laid off because of the virus.

Mr. Johnson acknowledged that closing pubs and other venues was “a huge wrench. But he said the measure was necessary to help slow the spread of the disease and ease pressure on the health service.

“I think people have made a huge effort in the last four or five days to comply,” he said. “But it was becoming clear that in order to drive [the growth in cases] down, to reduce the unnecessary social gatherings by 75 per cent, which is what the science tells us we need to do, then we need now to be making it absolutely clear that we’re going to enforce these closures.”

The actions mark a shift in approach by Mr. Johnson who has been less demanding than many other European leaders when it comes to tackling the pandemic. While countries such as France, Spain, Belgium and Italy have introduced sweeping lockdowns and put police in the streets to enforce the measures, Mr. Johnson has shied away from doing anything that appeared too overbearing. He was reluctant to close schools until this week and nearly every other action introduced by the government to stop the spread of the disease had been voluntary until Friday.

Even when asked on Friday how the order to close pubs would be enforced, Mr. Johnson said licences could be revoked but he insisted that he was counting on business owners and the public to do the right thing.

“What we’re doing is extraordinary. We’re taking away the ancient, inalienable right of free born people of the United Kingdom to go to the pub. And I can understand how people feel about that,” he said. “If people comply, then we will not only save thousands of lives but we’ll come out of this thing all the faster.” Unlike other leaders, Mr. Johnson is not ready to consider using police officers or soldiers to ensure compliance.

The government had also come under criticism for not doing enough to help millions of workers who will lose their jobs because of the outbreak. Chancellor of the Exchequer Rishi Sunak said on Friday that in addition to covering up to 80 per cent of all lost wages, the government will also allow companies to defer sales-tax payments and it will increase spending on welfare programs to help the self-employed.

Mr. Sunak had already announced a £330-billion ($550-billion) in emergency loans and grants for businesses as well as mortgage relief for homeowners. All of the actions “are unprecedented in scope and scale for a British government,” Mr. Sunak said.

Britain has yet to see the full impact of the virus and as of Friday, the country had 3,983 confirmed cases, up from 3,269 a day earlier. So far, 177 people have died. That’s still far fewer than in Italy where the number of deaths hit 4,032 on Friday, an increase of 627 from Thursday, which was the biggest day-to-day rise so far. The total number of cases in Italy has reached 47,021. Spain is the second-most affected country in Europe with nearly 20,000 cases and slightly more than 1,000 deaths. France has 12,612 infections and 450 deaths.

British health officials have been warning for weeks that the country was still weeks away from the peak of the outbreak. On Friday, the government’s science advisory panel warned that at least some restrictions on social gathering will have to remain in place for a year. "Under such a policy, at least half of the year would be spent under the stricter social-distancing measures,” the panel said. 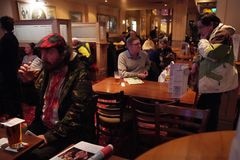