Volodymyr Zelensky, a comedian polls suggest could become the next president of crisis-ridden Ukraine, has a quick two-liner about the man he’s hoping to unseat.

“Why does [President Petro] Poroshenko want a second term?” Mr. Zelensky asks during the comedy shows that have served as his de facto campaign rallies during this most unlikely of election races. Then comes the kicker: “So he doesn’t get a prison term.”

It’s an easy, nasty line – referencing untested tales of corruption that have long swirled around Mr. Poroshenko, a chocolate tycoon who was elected head of state after Ukraine’s 2014 revolution – and it always earns Mr. Zelensky a laugh. Left unclear is why Mr. Zelensky himself wants to be president of a country that is ground zero in the collision between Russia and the West, and simultaneously plagued by endemic corruption and a sluggish economy.

Questions about Mr. Zelensky’s intentions have taken on increasing importance amid a flurry of polls showing the 41-year-old comic is on track to win the first round of Ukraine’s presidential election on Sunday. Within a month, Mr. Zelensky could find himself in the serious business of running a country that is caught in a geopolitical tug-of-war, one that features real fighting in the east of Ukraine, pitting its Western-supported army against Kremlin-backed separatists.

Until Mr. Zelensky suddenly launched his bid for office, his greatest qualification for being president of Ukraine was that he had played the role on TV. Mr. Zelensky and his unlikely campaign remind some of U.S. President Donald Trump, another TV star who got a skeptical reception upon entering politics.

There is an “anti-establishment mood and general disappointment with the political elite” in Ukraine, said Taras Berezovets, a Kiev-based political analyst. “In many senses, it’s like the Trump election.”

The biggest pre-election survey to date, which was released this week by a trio of polling companies, showed Mr. Zelensky leading with about 22 per cent of the vote, 10 points clear of both of his nearest rivals, Mr. Poroshenko and former prime minister Yulia Tymoshenko.

Mr. Poroshenko and Ms. Tymoshenko look to be effectively deadlocked, with each set to win between 12 and 13 per cent of the vote.

Under Ukraine’s electoral system, if none of the record 44 candidates for president passes 50 per cent on Sunday, the top two finishers will face off in a second round on April 21.

The race – which features contenders ranging from the nationalist far right to the openly pro-Russian, as well as one candidate under house arrest and another using the publicity to try to find a spouse – is unquestionably unique. “This is the first time in Ukraine’s history as an independent state when we don’t know who will make it to the second round,” said Alyona Getmanchuk, director of the New Europe Centre, a Kiev-based think tank.

In Mr. Zelensky’s satirical show, Servant of the People, a teacher from rural Ukraine is propelled to the presidency after recording an anti-corruption rant that goes viral on the internet. Life has been straying towards imitating art ever since Mr. Zelensky used a televised performance on New Year’s Eve to confirm rumours he would seek the president’s job for real.

Since then, however, he’s laid out little in the way of a platform. Mr. Poroshenko’s increasingly nationalist campaign – his slogan is “Army! Language! Faith!” – claims he is the best candidate to deal with the threat posed by Russia, and Ms. Tymoshenko has positioned herself as the champion of left-behind rural Ukraine. Mr. Zelensky has made few detailed promises other than to consult the people about what they would like him to do.

He says he’ll ask Ukrainians to identify the five biggest problems the country faces, and then crowdsource the solutions too. As for the conflict with Russia, he says he would meet directly with Mr. Putin, and put the result of any negotiations to a referendum.

Mr. Zelensky’s lack of political polish seems to be appealing to Ukrainian voters, particularly younger ones whose hopes were raised by the 2014 uprising, but were disappointed by the lack of genuine change.

“Distrust of all politicians is one of the things that really unites all Ukrainian regions at the moment,” Ms. Getmanchuk said. “Ukrainians believe that only an anti-establishment person, a person who doesn’t represent the current system, is able to reform this system.”

Mr. Zelensky’s support level has weathered accusations – which he denies – that he is little more than a front man for self-exiled oligarch Ihor Kolomoisky, an opponent of Mr. Poroshenko who owns the TV channel that broadcasts Servant of the People.

Mr. Poroshenko, 53, has a deeply mixed track record. He has won plaudits for his efforts to build up Ukraine’s military and deepen ties with the West after Moscow seized and annexed the Crimean Peninsula in 2014. He has made regular appearances in combat fatigues near the front line in the Donbass region of eastern Ukraine, where the five-year-old conflict against pro-Russian separatists has killed more than 13,000 people. Ukraine may have lost Crimea and part of Donbass to Russia, but the country’s sense of national identity is arguably stronger than ever.

But Mr. Poroshenko has struggled on other fronts. The country’s economy has started growing again over the past two years – after a deep recession that followed the events of 2014 – but real incomes have languished near US$350 a month, a reality made harsher by persistently high inflation. Mr. Poroshenko, who failed to deliver on a promise that he would divest himself of his business empire after becoming President, is also perceived by many Ukrainians as not having done enough to fight the corruption that has plagued the country since it was part of the Soviet Union.

Ms. Tymoshenko is widely perceived as a figure from the past. The 58-year-old, who is making her third run for president after serving two stints as prime minister, has been a prominent politician since the late 1990s. She is running this time on a populist platform, promising to triple pensions and cut voters’ heating bills in half, after Mr. Poroshenko raised gas prices to avoid falling afoul of the International Monetary Fund. Ms. Tymoshenko, who dealt directly with Mr. Putin when she was prime minister, has also made vague promises about ending the war in Donbass.

But Ms. Tymoshenko’s Batkyvshina party is Ukraine’s best-organized political force, which may be enough to carry her into the April 21 runoff.

Some analysts believe Mr. Zelensky, conversely, may struggle to live up to his polling figures. About 40 per cent of those who say they prefer Mr. Zelensky are first-time voters, and the get-out-the-vote capabilities of Mr. Zelensky’s newly formed political party – named Servant of the People, after his TV show – have never been tested.

With the stakes so high – and warnings this week from Ukrainian intelligence that Russia was plotting to sabotage the election with “unprecedented cyberattacks” – there are fears street unrest could return to Ukraine if Sunday’s result is controversial. Monitors from the Organization for Security and Co-operation in Europe will scrutinize the voting process, as will a 110-member team of Canadian observers that is being led by former foreign affairs minister Lloyd Axworthy. 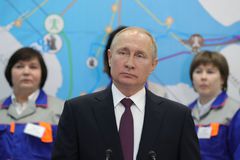 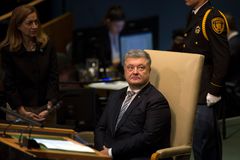 Failure to launch: How a Canadian-funded satellite deal fell into disaster in Ukraine
Subscriber content
February 5, 2019 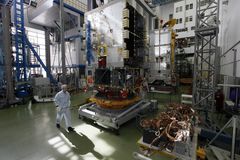